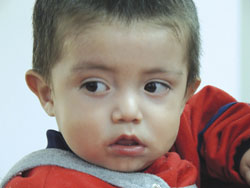 For such a young boy, Luis Enrique has spent too much of his short life in the hospital. He is now 1½ years old and from this photo taken at our last general meeting, he looks in pretty good shape—and he is compared with the first few months of his life. Those first nine months he was hospitalized time and again while doctors tried to diagnose and treat the reason why he was unable to keep any (and I mean any) food down. He would immediately throw it all back up and consequently wasn’t gaining weight or thriving as a normal little baby should.

It turns out that Luis Enrique’s stomach sphincters were underdeveloped and he was unable to keep food in his stomach or release any digested food through the rectum. (Sorry, folks; this may get a bit uncomfortable for some to read.) Therefore, he underwent two separate surgeries: one to relax the esophageal sphincter (the one at the top of the stomach that keeps the food down where it should be), and the second to repair the pyloric sphincter (the one at the bottom of the stomach that allows food to pass through the duodenum into the intestine). Some of you may have heard the term “mal absorption,” another term to describe part of his problem.

The answer was negative, so our little guy now has a colostomy bag which he will have to wear for several years until his anal/rectal muscles develop enough. Sounds like quite a bit for such a small boy, but he and his mother and father are coping well with all of it, especially since Luis Enrique can now eat, digest and excrete what he eats, and therefore is growing and developing more normally. A secondary diagnosis of all of this is that he is allergic to milk protein so has to have a special, and very expensive, milk substitute.

To date Programa pro Niños Incapacitados has reimbursed the family 27,500 pesos to cover the cost of the special milk, doctors’ appointments, special studies, colostomy bags, and transportation to and from Guadalajara.

At our last meeting, Luis Enrique was bright-eyed and engaging, and even took a walk around the room to see everyone while holding onto his mother’s hand. We’re confident that with continued care by his doctors and his family that Luis Enrique will some day conquer his digestive problems and lead a more normal life.