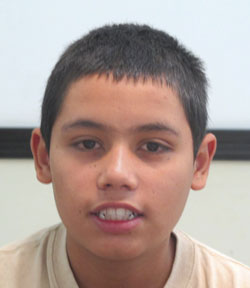 Edgar is 12 years old and lives with his Mom, Dad and 3 other siblings. Edgar was seven when he was diagnosed with Juvenile Diabetes or as it is commonly referred to as Type I Diabetes.

Type I or insulin dependent diabetes is a disorder of the body’s immune system. This type of diabetes in children is a condition in which a child’s pancreas no longer produces the insulin needed to survive.

The exact cause of type I diabetes is unknown. Studies have shown that in most people with type I diabetes, the body’s own immune system, which normally fights harmful bacteria and viruses, mistakenly destroys the insulin-producing cells in the pancreas.  Genetics may play a role in this process and exposure to certain viruses may trigger the disease.

Once these insulin-producing cells are destroyed, the child will produce little or no insulin. Normally, the hormone insulin helps glucose enter the child’s cells to provide energy to the muscles and tissues. Insulin comes from the pancreas, a gland located just behind the stomach. When we ingest food and everything is working properly, the pancreas secretes more insulin into the bloodstream. As insulin circulates, it acts like a key by unlocking microscopic doors that allow sugar to enter the body’s cells. Insulin lowers the amount of sugar in the bloodstream and as the blood sugar level drops, so does the secretion of insulin from the pancreas. In type I diabetes none of this occurs because there’s no or very little insulin to let glucose into the cells.  So instead of being transported into the child’s cells, sugar builds up in the bloodstream where it can cause life-threatening complications.

Children with this diagnosis must take insulin in order to stay alive.  This means undergoing multiple injections daily as well as testing their blood sugar by pricking their fingers six or more times a day.

With our impoverished families, coping with day to day living is often a struggle.  Having a disabled child compounds these struggles.  Edgar’s insulin costs 2500 pesos each month.

Since joining Niños Incapacitados in 2008, we have reimbursed the family $106,000 pesos toward his care.  Mom says she is diligent in teaching Edgar the difference between the good and bad foods his body needs to maintain normal blood sugar levels.  Edgar will tell you he finds it difficult especially when he is with his friends because they eat whatever they want.

Edgar was managing his diabetes quite well until December 15th when tragedy struck. Edgar’s dad was killed in a farming accident.  Edgar went in to shock and then began convulsing causing his blood sugar to spin out of control.  He would spend several days in and out of hospital in attempts to get his blood levels back to normal. As of our January clinic, Edgar’s mom announced he was doing better and starting to deal with his father’s death. He is still having a hard time accepting that he won’t see his dad again. This loss will take time to heal for Edgar and the family.

Just a reminder that the monthly meetings for Niños Incapacitados have resumed. Our next meeting will take place on February 13, 2014 at the Real de Chapala Hotel in La Floresta, starting with coffee at 10:00 a.m.  We invite you to come and meet another one of the children we are helping.