Tadeo de Jesús B. A. 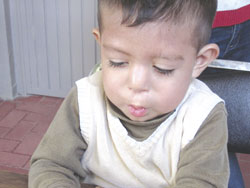 Since it has been almost two years since we introduced you to little Tadeo (“Thaddeus”), you might not recognize him now.  He has made amazing progress with his disability and has grown a lot since then.

Tadeo is the youngest of three children and lives with his parents in Chapala. His mother, María Liliana, is a housewife and Dad, José Roberto works in construction.  He has one sister and one brother, ages 6 and 3.

This photo doesn’t show Tadeo’s wrist and ankle joints, all of which are not the usual supple joints of a young child.  His fingers and toes also overlap each other as if he were purposefully crossing them. This condition is known as “arthogryposis,” which means “curved joint,” curved and in a fixed position. The condition is caused by anything that prevents those normal “kicks and shoves” of the fetus while in utero, thus also not allowing the joints the opportunity to move with full range of motion.  This occurs very early in a child’s development, and the more limitation during pregnancy, the more severe the contractures will be at birth. Other causes involve abnormalities of the muscle structure and abnormalities of the nerves that connect to the muscles.

Little Tadeo has already undergone several tests (electromyography) to check the function of his nerves, but so far nothing conclusive has turned up. Unfortunately he also suffered from some hours of lack of sufficient oxygen after being born, and so had to take anti-convulsive medications for several months.  Fortunately the medications have done their job and he no longer suffers from convulsions.

When Tadeo’s mother brought him to Niños Incapacitados, our medical doctor, Dr. Carla Cueva, a geneticist, thought our little guy could also have what is known as “Edwards’ syndrome, a genetic defect (chromosomal), also known as lack of the Trisomy 18 gene.  Fortunately, further testing over the past year or so has shown that this is not the case… fortunate because “Edwards’” is a very serious syndrome that would have shortened the boy’s life.

Now we have a more definite diagnosis of a certain type of “arthrogryposis,” known as Freeman-Sheldon syndrome, which is easier to treat, and while not curable, is not likely to be fatal.  You can see that Tadeo’s mouth is smaller than normal.  This is a common symptom characterized by pursed lips (also known as “whistling face”).  He also has a prominent forehead and somewhat of a sunken appearance of the middle of his face.  Tadeo’s mom has to buy special nipples for his nursing bottles to accommodate the labial anomaly.

He is responding well to physical therapy at Teletón, Mexico’s national physical and mental therapy clinic which he attends twice a week. His parents have been diligent in continuing the therapy at home, and at our last meeting it was a joy to see Tadeo walking on his own, coloring in a book, and generally being a shy little two-year-old. Niños Incapacitados has been paying for his therapy, his medications, a recent ultrasound and several X-rays, plus bus fare to and from Guadalajara for his therapy.  We are hopeful he will continue improving and thriving.

If you would like to learn more about Niños Incapacitados, please join us the second Thursday of each month at 10:00 a.m. in one of the meeting rooms at the Hotel Real de Chapala in La Floresta. We always present one of “our” children prior to the business meeting. Please feel free to bring a friend.