Child of the Month
By Rich Petersen 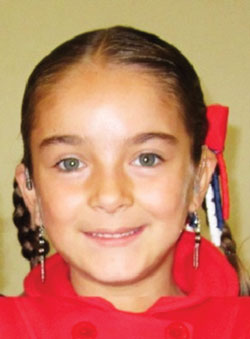 This very elegant six-year old is Dana Michelle Zambón Barajas. Niños Incapacitados featured Dana two years ago as our Child of the Month. At that time she had just undergone surgery for placement of a cochlear implant (see below). We wanted our members to see—and hear—the progress Dana has made over the past two years. She can now hear enough sounds to be able to pronounce words and form short sentences.

Some history:   At approximately one year of age, Dana’s family noted that she could not hear. A pediatrician in Guadalajara said this might have been due to a very high fever she had a few months earlier. A hearing specialist found the child to be completely deaf.

Prior to this and because of her young age, Dana started with weekly therapy sessions to see if some progress could be made to get her to form words and pick up sounds, but after six months and very little progress, Dana began attending an institute in order to learn to lip read.

The other reason for attending this school was its program to help children be eligible for a cochlear implant--a surgically implanted electronic device that provides a sense of sound to a person who is profoundly deaf. The implant is placed under the skin behind the ear and consists of both external and internal components to transmit processed sound signals to the cochlea and directly to the brain. Dana’s implant was placed in September 2010. Since she had never before heard sound, there were progressive stages she had to go through so as not to over-stimulate her. Thus, the sound level of her implant has been being increased gradually; every two weeks a little more sound is being transmitted.

At first the sound was frightening to Dana, but she has rapidly adapted to her new world. Her family has been going to special classes to learn how to help her adjust to hearing. They work with her at home after school, now with certain toy musical instruments and other toys that make sounds. As we heard at our monthly meeting in December she now has a voice and is beginning to communicate. She had been shy around others, but now she smiles almost constantly, an infectious smile that defies not smiling back.

Niños Incapacitados paid for several hearing tests prior to the surgery, and we continue to help with the cost of transportation to and from the Institute in Guadalajara. Her uncle, Diego, has taken on the task of driving Dana into school and back five days a week--no easy task. Her school session runs from 9:00 to 2:00 so Diego reads/studies, etc. while he waits for her. Bus transport would be too time-consuming and uncomfortable for such a little girl. Her mother and stepfather both work and therefore the grandparents and uncle have stepped up to the plate to help.

We at Niños Incapacitados are very happy to be helping such a close-knit family who has dedicated such a large amount of time and resources to the education and future of this child. To meet other of “our” children and to learn more about what Niños Incapacitados does, please join us the second Thursday of each month for our members’ meeting. 10:00 a.m. at the Hotel Real de Chapala in La Floresta.