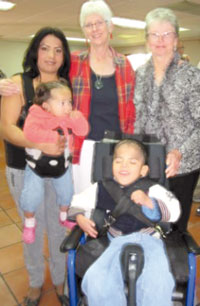 Our child this month is Mario de Jesús Móntez Oliveros, now 5 years old and sitting in his new wheelchair. On his right is his mother Carmen and his new little sister, Sinaí. Mario lives in Chapala with his mom, sister and stepfather.

The others in the photo are Linda Henley and Elaine Cooper, both of whom work with “Pasos Milagrosos,” a group that helps many children in the area through equine therapy. We are giving a special “shout-out” to “Pasos Milagrosos” this month because Mario, among several other of Niños Incapacitados’ children, are being or have been helped greatly by being able to ride on a horse each weekend. Linda is Mario’s “back rider,” i.e. she sits behind Mario in the saddle and helps to keep him upright and balanced.

We brought you Mario’s story about four years ago and decided to have him return to our monthly meeting in February so our members and volunteers could see the improvement he has made. It is beyond fortunate and bordering on the miraculous that Mario has survived to this point and we can bring you his story. A little history -----

Little Mario was born at 25 weeks gestation (5-1/2 months) and weighed less than one kilo at birth. In addition to such a premature entrance to the world and the problems accompanying it, Mario was born with hydrocephaly (sometimes referred to as ‘water on the brain’), retinopathy (a potentially blinding eye disorder that primarily affects premature infants weighing two pounds or less), pulmonary distress, and as if these weren’t enough, his right leg was malformed and the doctors thought they might have to amputate the limb.

For the hydrocephaly, Mario underwent surgery to place a drainage valve in his head, a common procedure that fortunately was successful in this case. He spent over three months in the Hospital Civil in Guadalajara recovering from this surgery and allowing his immature lungs to develop so he could come off a respirator. He was at home for a month and then had to undergo two surgeries on his right eye to repair the damage to his retina caused by the retinopathy. Fortunately the malformed leg healed and amputation was not necessary.

When his mother first brought Mario to a Niños Incapacitados intake session, he could not hold his head up, was very pale and listless, and did not seem to react to his surroundings. He had also developed an allergy to regular milk and was not eating well or gaining weight. With excellent care by his doctors, as well as his mother’s love and attention, Mario began to improve. He still has the drainage valve (which has had to be replaced once). He did react to voices and movement, however, and now with constant (3 times a week) therapy at Teletón (Mexico’s very competent therapy clinic), he is making good progress physically. For about a year Mario had to wear eyeglasses to assist his vision, but fortunately his vision has improved and the glasses are no longer necessary.

A big turning point in Mario’s development was his entrance into the “Pasos Milagrosos” program. He is more confident in his surroundings and seems to enjoy being around other children. His mother—and the volunteers at Pasos--noticed almost immediate changes in his motor and mental skills and ability. He loves attention and hugs and kisses, to which he responds with a big smile. He is now even able to say a few words.

We are Niños Incapacitados have been very gratified to see the progress made by this little guy. If you would like to learn more about what we do and meet one of “our” children in person, please attend our regular monthly meetings at 10:00 on the second Thursday of each month in one of the meeting rooms at the Hotel Real de Chapala. And for more information about Niños Incapacitados, see our website: www.programaninos.org.