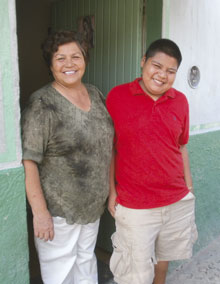 This good-looking guy is 12-year old Julio César Blas Ramos who lives in Ajijic with his aunt and uncle and his five siblings. Julio César suffers from recent onset of A.L.L., Acute lymphocytic leukemia, also known as acute lymphoblastic leukemia or acute childhood leukemia.  His diagnosis was made just last January and since then Julio César has been on chemotherapy, both I.V. and oral.

This disease affects the white blood cells (lymphocytes) and is the most common type of cancer in children.  The cause is due to a bone marrow cell developing errors in its DNA. These “errors” tell the cell to continue growing and dividing when a healthy cell would normally die, and thus blood cell production kind of “goes crazy.” The bone marrow produces immature cells that are incapable of functioning properly and end up crowding out healthy cells.

We are accustomed to learning from some of our families that the father is “no longer” living with the family, but in this case it is the mother who abandoned the family and no longer lives with them. Julio César’s father lives and works in the States most of the time, so that it why his aunt and uncle are caring for the children.  To the father’s credit, the moment he learned that his youngest son had been diagnosed with leukemia, he returned to Ajijic to help him begin treatment. It was the father who came to Niños Incapacitados seeking some financial help for the chemo treatments.  Dad works as a landscaper in California, so only visits from time to time.

It seems that Julio César’s leukemia was diagnosed early enough that his chemo treatments have been very effective up to this point; the dosage has been reduced as well as the frequency. One negative side effect has been weight gain, which the doctors and his family are attempting to deal with.  You can see from the photograph that he is a bit big for his age. His other primary symptoms are fatigue, frequent infections and nosebleeds. As mentioned, we are hoping the early diagnosis will help Julio César fight off the unhealthy cells so he can return to a more normal and active life.

Niños Incapacitados has paid for several chemo treatments as well as hospitalization during those treatments. Fortunately a few months ago the family’s “Seguro Popular” became effective and is now paying for the chemotherapy. Niños Incapacitados is staying involved by paying for other meds that the boy needs, as well as transportation costs to and from Guadalajara. With help from one of our volunteer doctors, Julio César’s weight is being checked and he has been given good advice on keeping his weight down.

If you could like to learn more about Niños Incapacitados and what we do---and if you would like to meet one of the children in the Program--please attend our regular monthly meetings on the second Thursday of every month at 10:00 in one of the conference rooms at the Hotel Real de Chapala in La Floresta. We look forward to seeing all of our members and supporters who have been away for the summer.