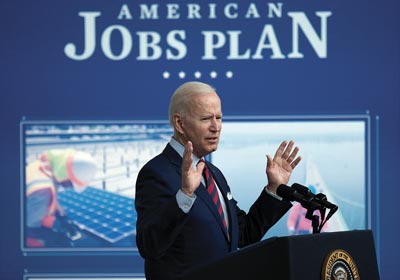 The American Jobs Plan is a proposed $2 trillion infrastructure investment. The urgency is apparent. These projects will facilitate American commerce and promote prosperity. The plan will hire workers at good wages, so it is a win-win proposition.

We are falling behind the rest of the world in significant areas. Several bridges have collapsed, killing people who happened to be on them. The American Society of Civil Engineers assigns a grade to our infrastructure every four years. A mark of C- is what they give us. That shoddy grade is an improvement over the previous D+.

The American Road and Transportation Builders Association identified more than 47,000 bridges across the United States deemed structurally deficient. They need renovations or repairs to upgrade them. In addition, we need to bring water systems up to date to get rid of lead pipes that can cause mental retardation in children.

China is a strong competitor, and they are far ahead of us in high-speed rail. A World Bank report says, “The advent of high-speed rail in China has greatly reduced travel time and has transformed Chinese society and economy. A broad range of travelers of different income levels chooses high-speed rail for its comfort, convenience, safety, and punctuality.”

The opposition to President Biden’s plan asks, “How will you pay for it?” The Biden plan would raise taxes on those making more than $400,000 a year and on corporations. On the other hand, this project will pay dividends immediately and into the next generation. In Texas, there are more trucks than cars. They represent every commercial interest. But who pays for the roads these companies use for their trucking needs?

The Walton family gets billions of dollars in tax breaks. The six siblings have more wealth than 49 million American families. The middle class subsidizes the Waltons by providing food stamps and Medicaid to their low-pay employees. This subsidy for such a wealthy family costs taxpayers $6.2 billion a year. Jeff Bezos paid zero taxes in 2007 and again in 2011. Forbes lists him as the richest person in the world at $189 billion. So how does his merchandise get to his customers? Yep, by UPS trucks that travel on roads and bridges paid by our taxes—not his.

The problem with the American economy is wealth distribution. America has plenty of money to pay for everything and anything. But too much is in the hands of too few people. As a result, billionaires and corporations hide their wealth from American taxes in places like the Cayman Islands.

That concentrated wealth does not circulate; it does not create demand for goods and services. People must exchange money to create a vibrant economy. The poor and the middle class spend all their money and save little. They are the ones who drive the economy. There is something in economics called the “ripple effect” or the “multiplier effect.”

Suppose Lydia works at a factory where the manager gave her a $1,000 bonus. Her propensity to save is 20%; her propensity to consume is 80%. Lydia puts $200 in her savings and spends $800 on new landscaping for her yard. Bob, the landscaper, earns $800 from Lydia. Bob saves $200 and pays $600 at Frank’s farm store for supplies. Frank needs tools from the hardware supply owned by Dave. Frank saves $100 and spends $500 at Dave’s hardware. This process continues until the savings at each step finally uses up Lydia’s original $800 purchase. Due to the multiplier effect, Lydia’s $1,000 bonus generated a total of $2,900, three times her bonus.

President Biden understands the multiplier effect. For example, suppose the government finances an upgrade on a bridge and pays $2 million in good wages. In that case, the multiplier effect will generate $6 million of economic activity and prosperity spreads. That $6 million will be subject to taxes, and revenue will flow back to the Treasury.

Extensive experience, including the Great Depression of the 1930s, proves that lowering taxes on the rich will not inspire them to invest in factory expansion, thus creating jobs. If they get billions in tax breaks, that money goes to the Cayman Islands, not to American economic growth. The Biden American Jobs Plan will generate economic prosperity for the most substantial number of people. It is the middle class that creates the demand that stimulates investment in factories and jobs. The middle-class sets in motion the multiplier effect, not wealth hidden in the Cayman Islands.