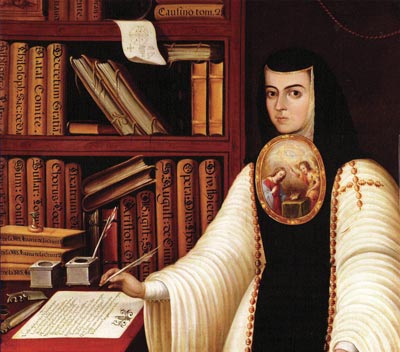 Juana Inés was an illegitimate child and, what was far worse, a woman. Even so, she emerged as the greatest American intellect of the 17th Century.

Juana Inés could read and write by the age of 3. At 16, she begged to masquerade as a man to attend university but had to continue to educate herself. She became a lady-in-waiting at the court of the colonial viceroy, who was so impressed with her intelligence that he convened a panel of 40 doctors of theology; philosophy, and humanities to test her. She astounded them all with the breadth of her knowledge, the depth of her thinking.

Citing her “total disinclination to marriage” and her desire “to have no fixed occupation which might curtail my freedom to study,” Juana Inés left the court for a convent, and soon distinguished herself as a writer, philosopher, theologian, composer and poet. Her quarters, housing the continent’s largest library, became a solon, a meeting place for other artists and intellectuals.

Sor Juana Inés unabashedly challenged church teaching and argued passionately for the rights of women: “Who has forbidden women to engage in private and individual studies? Have they not a rational soul as men do? ...I have this inclination to study and, if it is evil, I am not the one who formed me thus. I was born with it and with it I shall die.” And, “Foolish men who accuse women mindlessly...you cannot see you cause what you abuse.”

When her defenders, the Marquis and Marquise de la Laguna, left for Spain, the bishop pounced, forcing Sor Juana Inés to cease writing, sell her library as well as her musical/mathematical instruments, and devote herself only to penance and charity.

There may have been another reason Sor Juana became a nun: her affection for other women. She became the intimate friend of the Marquise de la Laguna, sometimes extolling her in poetry: “That you’re a woman far away is no hindrance to my love: for the soul, as you well know, distance and sex don’t count.…” And, “Let my love be ever doomed if guilty in its intent, for loving you is a crime of which I will never repent.”

Sor Juana Inés de la Cruz died after ministering to her fellow nuns during a plague. Today she is featured on the Mexican 100 peso note and in a wonderful Netflix Spanish-language (with subtitles) miniseries, Juana Inés.

This is a selection from Ellison’s book-in-progress: Niños Héroes: The Fascinating Stories Behind Mexican Street Names. 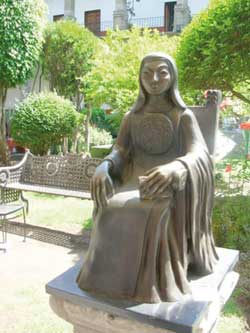 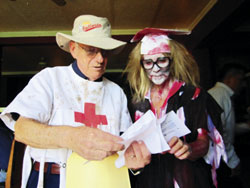 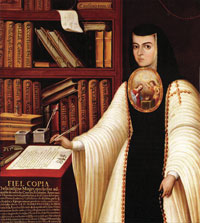