MEXICO: Assisted Living in Your Own Home 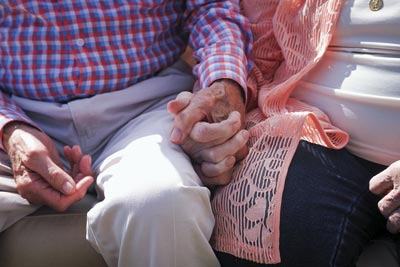 My husband died last January. He had MADSAM (Multifocal Acquired Demylinating Sensory and Motor Neuropathy) and had been in declining health for 12 years. With the onset of COVID restrictions, and his further deterioration to the point of being unable to walk even with his rollator, we had to create a cadre of helpers to allow him to live at home.

First, he was able to change his daily shower from evening to afternoon and Martin came every day except Sunday to assist him. He would also bring the heavy water bottles from the garage where they were delivered and bring the groceries from the car. We paid $2000p a month for this because he would also ride along to doctor and dentist appointments and help get him inside and back home.

Next, we had Cokie do his pedicures at home for $100p. The only thing he missed from this was his regular holiday designs painted on his big toes…such as the Mexican flag on one toe and the American flag on the other for Memorial Day.

Juana did his haircuts and beard trims on the patio and swept up the hair before leaving.

Our pharmacy delivered as did Pancho’s and Walmart and Costco when it came to groceries. We had food delivered from our favorite restaurants and his doctor made a house call to glue the cut on his face when he turned his scooter over. He was delighted that she used glue as it left no stitch marks on his face.

Because we live in Chapala where our street is paved and the curb cuts are normal, he could go to restaurants and coffee shops on his scooter and even had a favorite store near the plaza where he could sit outside on his scooter and they would wait on him there.

We live a block from a laboratory where he went for the regular INR blood tests that accompany the blood thinner Warfarin. Again, he would sit on the sidewalk and wave his prescription and the nurse would come and take his blood with children passing by on their way to school. This cost 100p.

He knew every dog in Chapala and their schedules. He would buy a side order of bacon for Steve who had a Mexican name but was known in the Gringo community as Steve. He came by at 9:30. Some bacon would also have to be saved for Barbara Jake the cat. She was originally named Jake until it was discovered she was a girl.

The three dogs who came to the Legion with their owner would start to salivate when Chuck entered the Legion gate on his scooter. They knew dog treats were in order.

My husband was also the duty officer one day a week at the Legion until the cold weather drove him out. He always said, living in Mexico gave him an extra ten good years because he didn’t have to cope with snow.

Having celebrated 48 years in Alcoholics Anonymous, he helped start two meetings at the Legion and a third was started by others so he was able to attend three meetings a week.

He started to fade six weeks before he died. He said he was tired of being a cripple. But he had very vivid memories of hiking to the top of all the mountains surrounding the lakes and he enjoyed reminiscing about those times with other hikers.

He was having trouble transferring from his scooter to the bed and I had to help him once. It took all my strength to do that. He noticed and said, “Is it time to put me in a home?” I told him I didn’t think we were there yet, he would lose more than he gained.

But the night he died, he said before bed, “I think I have only one more transfer in me”.  He was right, he died at 2:00am that night.

But I look at all he gained from having assisted living at home: interacting with dogs, AA friends, storekeepers, waiters, a sense of self-sufficiency, being able to sharpen knives in the kitchen and turn on the dishwasher (I didn’t learn to do it until after he died), being a volunteer, and sitting in his scooter at the open gate to watch the parade of neighbors and delivery people pass by. Truly, Mexico and Chapala offer the opportunity to continue living until the end. And we probably spent no more than $200USD.