Hiking with the Exes 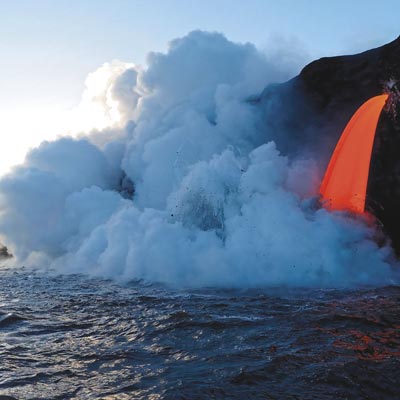 My daughter Kayla’s destination wedding in Kona went off with very few hitches. Her baby even waited until after the ceremony to have a complete meltdown. The only decision Kayla struggled with before the big day was who should walk her down the aisle: her biological father, or her brother’s dad, or her godfather, or me, her mom/dad. Her solution was ingenious. She chose all of us. We carried her down the aisle together in a makeshift throne, purchased from a local thrift store, that her bridesmaids had festooned with palm leaves, ti leaf leis, and purple and white silk flowers.

In the spirit of this inclusive vibe, and perhaps under the influence of a few too many Mai Tais, I invited both of my exes on a family hike to see the active lava flows on the Hilo side of the island. On the day of the hike, we all met for breakfast at my best friend Jenny’s house in Captain Cook. Jenny and her husband Mehdi demonstrated their Iranian-style-over-the-top hospitality by organizing the breakfast, coordinating the logistics of the drive to the other side of the island, and putting together trail snacks for the whole group. Their 8-year-old daughter, Parisa, scrounged up nine flashlights as the return hike would be after dark.

My daughter’s father, Tyrone, showed up first, with a six-pack. He cracked one and offered the rest of us one as well. My friends declined, and I almost did, but years of anecdotal evidence suggested that I was a better parent (and now grandparent) after partaking in a beer or two. Tyrone and I enjoyed the ocean view and the beer in a silence that was much less awkward than either of us anticipated.

My son’s father, Tom, and our 11-year-old niece, Solana, arrived exactly on time. A half an hour later, our daughter, Kayla, dropped off the rented passenger van and her almost teenage sons, Kristian and Derrius, before she roared away in Mehdi’s truck.

Born only a month apart, Derrius and Solana immediately began to pick at each other.

“You can’t wear Chuck Taylors on a hike,” Derrius proclaimed.

“They’re my feet and I can wear whatever I want,” Solana answered.

Kristian, gobbling piece after piece of fruit, pretended to be above it all.

“You might want to slow down on the fruit,” I warned. “The hike is nine miles long and I don’t think there are any bathrooms on the trail. There certainly aren’t any bushes or trees. A giant lava field is a terrible place to have a poop emergency.”

I suggested the scones. He ignored my advice.

Derrius and Solana had continued to bicker, but Tom gently intervened with the cousins and had them laughing in no time.

A bit annoyed by the lack of purposeful preparation, Jenny reminded us, in no uncertain terms, “We have to leave ON TIME.”

Quick, preemptive bathroom trips followed, and we piled into two vehicles, girls in the SUV and boys in the passenger van. Tyrone volunteered to ride herd on the grandsons and climbed into the back with them, a decision he seemed to regret when we stopped for some Ka’u coffee in Naalehu a little over an hour later.

The boys piled out of the van, arguing.

“If you’re going to use Dragonite to catch Jigglypuff, it’s way better to use a hyper beam than a hurricane.” Kristian proclaimed.

“You’re stupid. It’s the other way around.” Derrius answered.

“Them two would argue about which side of a stamp to lick,” Tyrone grumbled as the boys scurried off in search of more Pokémon and he headed for the liquor store to replenish his beer supply.

Beverages purchased, our unlikely group sat around a picnic table enjoying the refreshments and exchanging snacks and good humor. A stranger would have thought we were all old friends. When we climbed back into our vehicles a few minutes later, the boys were arguing again.

“Black Panther is so the richest superhero!” Kristian insisted.

“Black Panther is a TRILLIONAIRE! Dumbass!”

Tyrone rolled his eyes and rolled up his sleeves as he climbed in behind them. The girls were already buckled into the back seat of the SUV, making each other giggle with Snapchat filters. I didn’t feel an ounce of remorse letting Tom and Tyrone deal with the pubescent pair. I had raised their children largely on my own after all. I did feel a little bad for Mehdi.

In two short hours (for me), we found ourselves at the trailhead in Kalapana. My sister Sasha and her teenage son Bodhi met up with us there and we charged forth toward the lava four and half miles away. Solana, who had been such a charming companion for the much younger Parisa, immediately abandoned her new friend and fell in with the boys. As this group trotted ahead, the parents crunched behind, drifting in and out of unlikely trios and pairs. Sasha and Tyrone laughed together just ahead of me. Tom and Mehdi talked amicably. Parisa shared her considerable lava knowledge with her mom and me.

Strolling through the endless lava, which had laid bare a once thriving rainforest, I found myself struck not by the devastation but by the possibilities of rebirth. The stark landscape, reduced to only two colors, the sapphire blue sky and charcoal black lava, somehow summoned re-creation. The parallels with my past relationships weren’t immediately obvious to me. I did, however, find myself having long, enjoyable conversations with the dads. Tyrone and I discussed the pros and cons of our physical labor jobs and commiserated with each other about bone-dumb coworkers and incompetent bosses. Tom and I talked about the near impossibility of balancing family, work and creative lives. The conversations would have been forgettable had they been with anyone else. The smile that snuck onto my face with this realization lasted for about a minute before I was accosted by a panicked-looking Kristian.

“Grandma H, I gotta use the bathroom!”

“One or two,” I asked, knowing the answer.

I managed to contain the evil-step-grandmother in me from shouting, “I TOLD YOU SO!” But I guess my expression contained enough horror that Tom quickly jumped in.

“I got this,” he valiantly offered.

“You’re my hero,” I acknowledged, handing him a roll of toilet paper, hand sanitizer, some wet wipes and a gallon Ziploc bag. Disaster averted, the rest of the hike went well.

We arrived at the end of the road just as night was beginning to fall. The streams of lava cut unimaginably bright swaths in the black mountainside. Radiant veins of vivid reds, yellows and oranges intertwined with each other, undulating toward the ocean. Even the grandboys were speechless (for a minute). Excited exploration followed. With the natural athlete Derrius in the lead, the three boys bounded up the rocky hillside, Sasha and Tyrone scurried behind them laughing. Tom took Solana as close to the lava as the thin soles of her Converse shoes would allow.

“I see what you saw in them,” Mehdi said.

“I never hated them,” I said out loud.

But there had been hateful moments. I remembered cursing them both for not paying child support all the times I had to hand wash my cloth menstrual pads in the bathroom sink and dry them in the oven. This memory, and others like it, had grown fat and intractable with regular feeding. I doubted I could rid myself of them entirely. This same doubt crept into that moment as I looked across the uneven lava field, littered with sharp-edged boulders and wondered if I could make it to the clifftop to watch the lava “hit the ocean,” as the kids put it.

Could it be that easy? It was. Spellbound, we watched the lava streams cascade over the cliff and plunge into the turbulent ocean. Steam roared upward. Like the birth of a baby, the scene could be characterized as violent but was, in truth, miraculous.

On the night hike back, the 19 stars we could usually see were joined by 19,000 more, so many you could barely see the black sky behind them. Kristian, a fledgling astronomer, named constellations and pointed out a planet or two. We walked on, mostly quiet, through aches and pains and private musings.

“That was a journey,” Derrius announced when we reached the parking lot.

Late that night, I sat alone on my sister’s front porch in Hilo, drinking a cold beer. My body ached a bit, but the pain I hadn’t realized I carried in my mind and soul was gone. I didn’t have two failed marriages, I realized. I had two relationships that took unexpected courses and still brought me unexpected gifts.