Email: This email address is being protected from spambots. You need JavaScript enabled to view it.
Phone: 33-2506-7525

“Music really is a way to reach out and hold on to each other in a healthy way.” Stevie Ray Vaughan.

And here we sit. Your intrepid reporter has lost track of how many days and weeks we have been under quarantine here Lakeside.

I love to be out, to attend functions, mingle with friends over good food and company, to be in awe of the talented arts community I am honoured to be a part of.

This quarantine is hard. I am saddened by the loss of so many events, so much time and so many opportunities for our community of artists, musicians, actors and writers.

Then I hear a saxophone player, his/her mellow notes wafting in my window on the soft breeze. My friend tells me she hears a tenor singing in her neighborhood. Books lay in messy folders as writers have unprecedented time alone to edit and finish their work. And my heart warms knowing we are all out here, we are all resting and stressing, honing our skills, waiting for the time when our talents can again shine on the stage, in the concert hall, the bars and clubs, the venues we have grown to love and dearly miss. We are out here, being patient for the day or night when, once again, the lights come back up.

While events may offer a refund in the wake of cancellation, please consider making your ticket price a donation. A sudden event such as this can devastate live performances. Our Lakeside arts groups would appreciate your thoughtfulness in this time of uncertainty.

I have invited our regular contributors to tell me stories, their history, their current endeavours.

From Lakeside Living in these different times, now for something completely different…

On March 11th the Open Circle Steering Committee faced the serious dilemma of whether to hold our scheduled program slated for just four days away in the garden at the Lake Chapala Society. The program was to be Dr. Todd Stong’s compelling “Annual State of the Lakeside Address” for which we were anticipating 350 to 400 people. Dr. Stong is one of our most popular presenters and we imagined this large crowd cramming through one gate and sitting shoulder to shoulder in the garden. We considered how we might arrange seating in order to comply with the new social distancing guidelines. Reluctantly, we opted to do what was in the interest of public health, especially for those most vulnerable over the age of 65, and we canceled Dr. Stong’s talk. This was before other cultural events had begun their own cancelations, but we have never questioned the wisdom of having put our audience first. As the dimension and scope of the pandemic became more clear, we realized the future would be impossible to predict and informed the world we were suspending Open Circle until further notice. 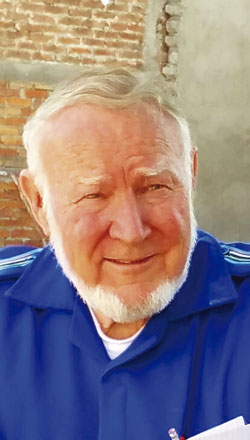 Open Circle is programmed an entire year in advance. Not wanting to disappoint our audience or the many presenters who had already prepared, we came up with a plan to continue to offer weekly presentations via our website opencircleajijic.org. We offered disappointed speakers the option of making a self-video of their presentation at home that we would then post. If speakers preferred not to make a video, Open Circle would refer subscribers through our weekly newsletter to our most popular videos of presenters from previous years, all of which can be accessed through opencircleajijic.org. Some of the canceled presenters who have made or will make selfie videos are Michael McManmon, Susan Weeks, Gale Park, Sydney Metrick, Robert Branson, Livier Ayon, and Christian Robertson. In addition, Todd Stong is posting a comprehensive written report on the Lake and Lakeside villages in five parts. 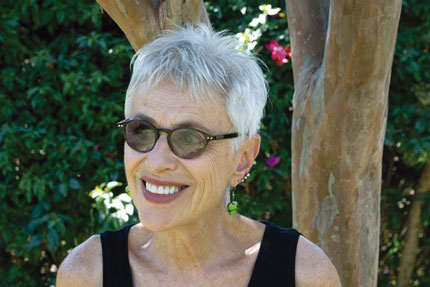 As soon as the COVID-19 crisis abates, Open Circle looks forward to resuming its weekly outdoor programs under the big tree at LCS. 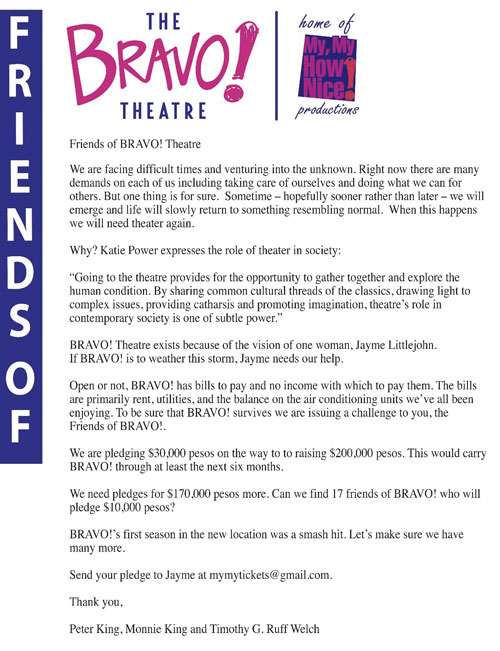 Several years ago, Jayme Littlejohn started talking to fellow local actors about what fun it would be to have a place where those of us who were trained theatre people could “play” together….a sort of local semi professional safe space.

Jayme was always astounded at the number of people living at Lakeside who had either been professional actors, directors, etc. or who had studied theatre extensively and made it their lives on some level during their pre-retirement lifetimes.

We always had so much fun when we got to work together in local shows, but before BRAVO! Theatre it felt like not everyone understood why we wanted to take the work so seriously.  It was fun to do shows but we all discovered that we craved more.

Jayme then started doing occasional shows under the flag of My, My How Nice! Productions at the Sol y Luna complex on Rio Bravo in west Ajijic.  The first production was Always… Patsy Cline in October of 2010.  The space was rough – carved out of a huge room in the front of the complex by room dividers, the stage lit by two tripods with four light fixtures each.  The show turned out to be immensely popular and Jayme says she ended up selling partial visibility seats for the final performance.  There were several other productions for a few years – Cemetery Club, The Gin Game, The Fantasticks – until Russell Mack, gathered a group of guys who then converted a smaller room in the complex into a legitimate black box theatre with stage, a tech booth, raised seating, an actual backstage/greenroom and many more light fixtures which had been added by the BRAVO!’s then lighting and sound gurus, Kitt and Bill Vincent.  In addition educational programs were implemented including acting, improvisation and dance classes.

It was a manageable upstart producing between two and three shows a year.  The audiences gradually increased as did the interest in BRAVO! Theatre.

In July of 2018, BRAVO! Theatre had to leave it’s location in Sol y Luna and was homeless until Jayme found a new location at 441 Hidalgo in Riberas del Pilar.  It took almost a year and a dedicated army led by architect Alan Marsh, builder Niels Petersen and designer/builder Jeremy Seftor, to build a new black box theatre replete with cabaret stage, bar and an abundance of audience bathrooms. We created a magical environment out of a big empty warehouse. The first show opened in September of 2019.

The first full season of BRAVO! Theatre included Address Unknown, Songs for a New World, Every Christmas Story Ever Told, Lettice and Loveage and The Book of Will.  The last play did not complete its run due to the impending COVID-19 pandemic.

BRAVO! Theatre continues to grow.  The educational programs are thriving and BRAVO! now includes these three types of performances: 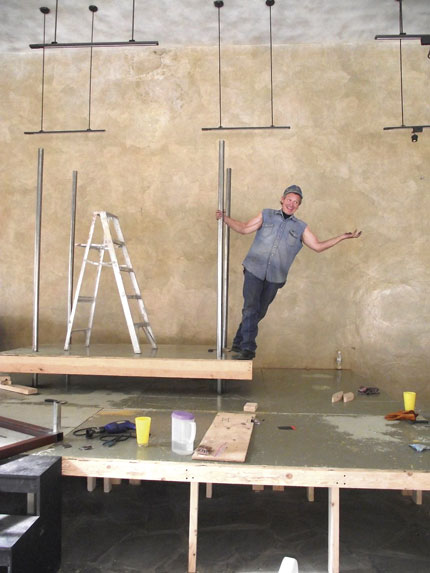 Stay with us…we look forward to having you back in your seats enjoying all Lakeside has to offer.