Carol D. Bradley
Email: This email address is being protected from spambots. You need JavaScript enabled to view it.
Phone: 33-2506-7525

The Lake Chapala Society hosts Open Circle every Sunday at 10AM, a popular community gathering in Ajijic every Sunday morning to enjoy a diverse range of presentations.
For more information see their website: opencircleajijic.org
Open Circle Presentations for March:
March 8  How the US and Mexico Came Together to Defeat the Last Empire in The Americas
Presented by Michael Hogan 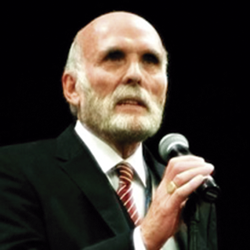 Historian Michael Hogan returns to present his latest work, GUNS. GRIT, AND GLORY: How the US and Mexico Came Together to Defeat the Last Empire in The Americas. In Hogan’s 4th appearance on our stage he will discuss this little known period that marked the end of the French Occupation of Mexico and entertain us with anecdotes and character sketches of the historical figures of the day. Among them will be a Mexican general who brought camels to the Sonoran Desert to transport US artillery to Mexico, and a 24-year-old Mexican lad who raised millions of dollars selling Mexican bonds with the help of Mary Todd Lincoln.
Hogan is the author of 25 books including one that inspired an MGM movie and six documentaries. Following the presentation, please join Professor Hogan at a book signing and luncheon at La Nueva Posada just a few blocks down the road.
March 15  Dr. Stong’s Annual “State of the Lakeside” Address
Presented by Todd Stong
This 17th year addressing Open Circle, in addition to rural village water supply/wastewater treatment, Dr. Stong will focus on his efforts to define the causes of and identify actions to retard the advance of kidney disease in 2000-3000 children in villages west of Chapala. He will soon be conducting briefings of parents in 8-10 village plazas. Jobs, children’s health and adequate safe water (some households receiving less than 6 hours per week), are the key needs of Lakeside’s rural poor earning less than $10/day. He will also offer his views on the future of Lakeside and Mexico.
Dr. Todd Stong’s 27 years in humanitarian service have focused on water-related projects in rural Africa, Asia, and Latin America. As a West Point graduate, Colonel Stong served as a construction engineer for 15 years in Korea, Vietnam, and Germany, followed by 15 years directing research in federal laboratories. He has six engineer sons.
This session of Open Circle will begin at 10:30 and conclude at noon.
March 22  12th Annual Talk on Global Warming, Climate Change, and the Rapid Growth of Renewable Energy
Presented by Donald W. Aitken, Ph.D.
Dr. Aitken will give an overview of the startling impacts of the continuing increase in international emissions of greenhouse gases and the rapid and increasingly extreme global responses of climate change to those. He will discuss the horrors in Australia, which may be an example of what is in store for the rest of the world. He will also note the unequal international responses to what is now acknowledged as a global crisis and will review the rapid increase of renewable energy and its impacts globally and locally.
Dr. Aitken, a 13-year resident of Ajijic, is a former Research Professor of High Energy Nuclear Physics and Astrophysics at Stanford University, and founder and long-time Chairman of the Department of Environmental Studies at San Jose State University. He served as the Executive Director of the U.S. Department of Energy’s Western Regional Solar Energy Center, and as the Senior Staff Scientist for Renewable Energy Policy and Economics with the Union of Concerned Scientists. Dr. Aitken’s important Power Point address will be held at Club Exótica in the rear of El Jardin Restaurant in the Ajijic Plaza. This session of Open Circle will begin at 10:30 a.m. and conclude at 12:00 noon.
March 29  Building Community
Presented by Dr. Benjamin Franklin 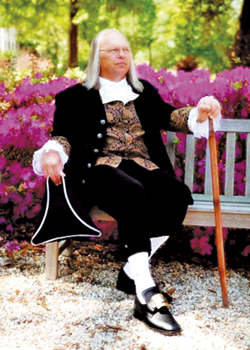 This week we welcome Dr. Benjamin Franklin to Open Circle. You will hear how Dr. Franklin helped build his adopted hometown into the greatest city in Colonial America. We ask that you turn your minds back in time to June 1775. You are citizens of Philadelphia. The city is alive with the energy of immigrants and talk of war.
Dr. Franklin has spent 15 of the last 17 years in London acting as the agent for the Colony of Pennsylvania. Both Philadelphia and Dr. Franklin have changed during his absence. The Colonies are on the eve of revolt against their British masters. In a rare public speaking appearance, Dr. Franklin will reflect on his life and his efforts to shape Philadelphia and Pennsylvania. Dr. Franklin holds honorary degrees from the universities of St. Andrews, Cambridge, Oxford, Harvard, and Yale.
April 5  Back to the Basics
Presented by Susan Weeks
Susan Weeks will be offering us an opportunity to examine our personal values. The only constant in the physical world as we know it is change. As we grow and mature through life experience and knowledge, our own values may have evolved. When was the last time you took an inventory? Together let’s explore the endless possibilities.
Susan remains a life-long learner. Having declared seven majors, including international relations, history, and psychology, she finally received a BA in Liberal Studies. Her interests remain far flung and she is currently working on attaining a “Rev. Dr.” designation. Susan’s professional background includes acting, editing, domestic/international tour directing, and life coaching. Prior to moving to the Lake Chapala area in 2016, she was the Spiritual Leader of Unity on Cape Cod.
PAGES FROM HISTORY

The Lake Chapala Community Orchestra is, once again, gearing up for another exciting concert presentation on Sunday March 29 and Monday March 30.
This time the audience will be taken on a musical journey through history.
Entitled “Pages From History” the concert will feature orchestral works written to commemorate famous historical events.
“Before film music gave us a musical background to history, composers such as Beethoven and Tchaikovsky composed orchestra works depicting significant historical events” says Michael Reason, the orchestra’s conductor.  1812 by Tchaikovsky is perhaps the most famous of these but Finlandia by Sibelius and Egmont Overture by Beethoven are equally appropriate in their respective appraisal of history.
Reason believes that an orchestral concert should appeal to a wide audience and his ability to program concerts with works from diverse musical genres is a hallmark of the orchestra’s presentations.
Guest artists include Judy Roberts singing a World War 2 song medley and the orchestra’s principal clarinetist in Mozart’s Clarinet Concerto.
Music from the cinema will feature prominently with James Horner’s magnificent score to Apollo 13 and John Williams moving theme to Oliver Stone’s JFK and all the music being complemented with video projections.
Since its inception in October 2008 the Lake Chapala Community Orchestra has sold out every concert well in advance and this promises to be no exception.
This enterprising concert will take place on Sunday March 29 and Monday March 30 both at 3pm at the Lakeside Presbyterian Church located at 250 San Jorge, Riberas, Chapala.
Seating is limited to only 175 people per performance so early booking is highly recommended.
Tickets are $250 ($150 Students) and can be reserved/purchased by emailing This email address is being protected from spambots. You need JavaScript enabled to view it..
For more info contact: Michael Reason (Conductor), Lake Chapala Community Orchestra, This email address is being protected from spambots. You need JavaScript enabled to view it.
BARE STAGE THEATRE PRESENTS, These Shining Lives, By Melanie Marnich, Directed by Phyllis Silverman, Dates: March 27th, 28th & 29th
“Strength, Determination, Accountability & Friendship”
These Shining Lives, a drama by Melanie Marnich and directed by Phyllis Silverman. Performances are March 27th, 28th & 29th. The plot revolves around the true-life circumstances of women in the 1920’s, just newly accepted into the world of work but still considered expendable. A story of love and survival in its most transcendent sense, as the women refuse to allow the company, that has them painting glow-in-the-dark watch faces using the radium that steals their health, to kill their spirits or endanger the lives of those who come after them.
Cast: Amalia Crocker, Frank Lynch, Dick Miller, Gisele Phipps, Darlene Sherwood & Claudine Weinfeld
Tickets $150, Reservations: This email address is being protected from spambots. You need JavaScript enabled to view it., Showtime 4 p.m., Box office & bar open at 3 p.m. Seats are held till 3:50 p.m., Located at #261 on the mountain side of the carretera in Riberas del Pilar across from the Catholic Church. Please, no parking inside Baptist Church lot.
Please Like, Follow & Share our Facebook Page: www.facebook.com/barestagetheatre2018/
Cast: Seated, Dick Miller. Standing L to Rt, Claudine Weinfeld, Gisele Phipps, Amalia Crocker & Darlene Sherwood. (Frank Lynch not pictured). 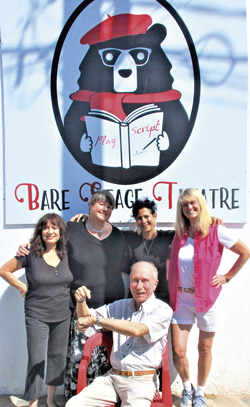 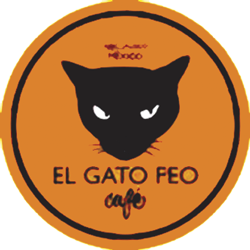 MEXICO is the topic of the Tuesday, March 24 (4-6pm) event from Lakeside Published Writers Read their Work. Several local authors have written about Mexico, or about travel in Mexico, so this will be an interesting reading.
Arrive by 3:30 to get your drink & take your seat / Upstairs* at El Gato Feo Café (next door to Barbara’s Bazaar) / Parking at Ajijic malecon** / *We will have a helper for anyone who needs assistance in going upstairs. / **If you cannot walk from the malecon to Independencia, phone Patricia 331-790-5028 and we will arrange for someone to drop you off at the Café.
Reminder: this monthly event--every 4th Tuesday--is held upstairs at El Gato Feo Cafe, next door to Barbara’s Bazaar. Each month we present a different topic, so please join us. And El Gato Feo is now offering food, so you have a choice of light meals to enjoy with your wine or other drink. 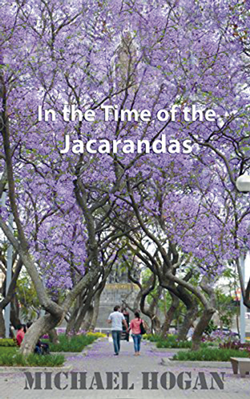 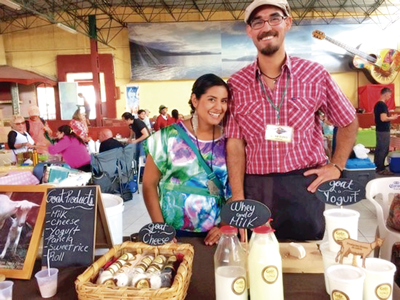 10 years ago, a small group of local women saw a need to bring organic fruits and vegetables to one place for sale, to help a friend with cancer. So was born the Tuesday Lake Chapala Farmer’s Market.
Now housed at La Huerta Salon De Eventos in West Ajijic, the market will celebrate it’s 10th anniversary in March 2020 with a month-long celebration of food and craft giveaways, special presentations and good cheer.
Come celebrate with us every Tuesday in March.
Lake Chapala Farmer’s Market, Tuesday 10 a.m. to 12:30 p.m., La Huerta Salon De Eventos in West Ajijic
Musical Schedule: 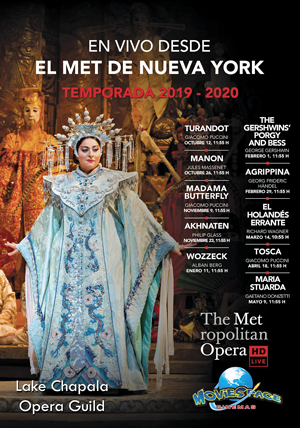 By Peter Quilter, Directed by Peggy Lord Chilton, Show Dates: March 27 – April 5, 2020
Show Sponsor: Susie Patch, in honor of her late husband, Glenn.
A touching, hilarious, yet bittersweet comedy about an actress making her farewell performance.
The dressing room of a theatrical star is as full of conflicting emotions as exist on stage. In this delightful and light-hearted play, the famous Lydia Martin sweeps in for the final performance of her long and glittering career. Around her are her dresser, her agent, her daughter, her ex-husband, her new fiancé and the company manager, bringing with them a flurry of goodbyes, tears, insults, laughs, recriminations, kisses and regrets. On stage she takes her final bow to storms of applause before returning to the dressing room to make a final decision on her future.
Reviews: “A huge success...the applause just didn’t want to end... The play is full of witty dialogue that is also philosophically profound... A smart, intelligent and very amusing play.” – (Der Merkur at the German premiere)
LLT Box Office:  10am to noon, every Wednesday & Thursday.  During Mainstage shows, 10am to noon, every day but Sunday, & one hour before curtain.
Show Times: Evenings 7:30pm Matinees 4 pm.  First Saturday and both Sundays are matinees.  Cuota de recuperation – 350 Pesos
Email:  This email address is being protected from spambots. You need JavaScript enabled to view it. 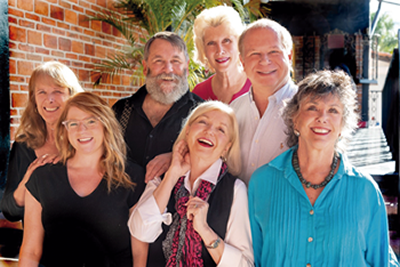