OPEN CIRCLE
Sunday morning finds Lakeside residents at the Lake Chapala Society and Open Circle, a forum on a variety of stimulating topics. A social hour with coffee and snacks at 10 am is followed by an interesting lecture and discussion at 10:30.
May 5  Metamorphosis: Surviving and Thriving through Environmental Illness
Presented by Pam Wolski
¨Multiple chemical sensitivity,¨ ¨sick building syndrome,¨ ¨food/dental intolerances¨—these are just a few of the many terms that can describe Environmental Illness. Pam Wolski will tell of her 30 year struggle against this condition, which began after several overexposures to toxic chemicals. She will share how she learned to thrive instead of just survive, how she found true love along the way, and how she discovered the truth of the statement, ¨the greater the struggle, the more glorious the triumph.¨ Case studies, personal memoir, and poetry will be included.
After graduating from college and working for 11 years as a book editor at a publishing company, Pam experienced the drastic changes in life that are caused by Environmental Illness. She spent many years researching and receiving medical treatments, exploring alternative methods in psychology and spirituality, and finding solace through friendships, faith, and poetry.
May 12  Mariachi Real Axixic and Mariachi Infantil Cosalá
Although they’ve been singing together for only a little over a year, this home-grown group has distinguished itself from all the others. Led by Dani Medeles, member of the renowned musical family by that name, the instrumentalists have extraordinary technique combined with original arrangements. Medeles recently started a mariachi group of 14 children enrolled in the San Juan Children’s Choir and Orchestra, the delight of Open Circle each December. The kids will be performing this Sunday as well.
May 19  The Snake Swallows Its Tail: An Eternal Cycle of Renewal
Presented by Sydney Metrick 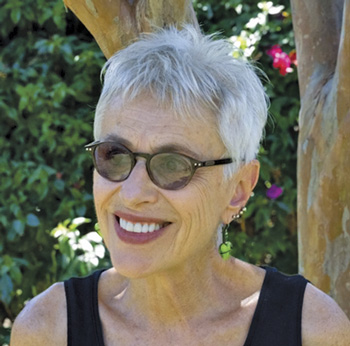 The ancient symbol of the snake eating its tail represents the past appearing to disappear but actually transitioning into a new experience of reality. Or as T.S. Eliot said, “the end is where we start from.” Dr. Metrick will review the five major transitional stages of our lives: beginnings, mergings, cycles, healings and endings, and discuss how we support these important passages. In this talk you’ll learn how to bring more meaning to your own transitions.
She has authored five books that address rites of passage: The Art of Ritual, I Do, Crossing the Bridge, Rituals for Life, Love and Loss, and the soon to be released From There to Here, which includes interviews with people who have moved to Mexico from another country. Sydney has a doctorate in expressive arts therapy and decades of experience creating and performing ceremonies for individuals, families and groups.
May 26  Mexican Haciendas: Where They Came From, How They Functioned, Where They Went
Presented by Jim Cook
Most foreigners have a somewhat hazy and usually very romantic vision of haciendas. Today, most haciendas are in ruins, but for 400 years they provided the way in which Mexico’s agriculture, ranching, and mining were organized. This presentation will show how and why haciendas got started in Mexico; the central role they played in the centuries between the Spanish Conquest and the Mexican Revolution; and what became of them following the Revolution.
Jim Cook has visited and photographed more than 100 haciendas during the 12 years he and his wife have lived in Mexico. Many of these photos appear in his internet blog called “Jim and Carole’s Mexico Adventure”. His work has also appeared in Ojo del Lago and other local magazines, as well as in books and websites published in English, Spanish, Danish, and Russian.
June 2  Náhuatl—Linguistic Window to the Aztec Culture
Presented by Agustín Vásquez Calvario
Tonatzin represents The Earth from which we came and to which we will return. For the Mexicas she was the Mother of everything that exists. She gave us eyes to behold the majesty of the mountains, seas, and vegetation. She gave us ears to listen to the sound of birds, water, and wind passing through the leaves of trees. And she gave us mouth and tongue to interpret those sounds with poems and songs in her honor and to be always in harmony with mother nature.
Agustín Vázquez is originally from San Juan Cosala. His ancestors belonged to the Cocas tribe, a branch of the Aztecs who spoke Náhuatl. He will speak to Open Circle about the languages of his ancestors, which he believes are important because through them we can keep that culture alive. Through language we can return to the gift of nature that sustains us. Agustín is the owner of Viva México restaurant in San Juan Cosala.
LLT NEW SEASON
We hear from Lakeside Little Theatre about Season 55. It starts a bit later, on November 8, on account of construction and revision activities.
Here is the lineup and starting dates:
Lunenburg, comedy/drama by Norm Foster. November 8-17
The Real Inspector Hound and After Magritte, two comedies by Tom Stoppard. December 6-15
20th Century Blues, comedy/drama by Susan Miller. January 17-26
My Fair Lady, musical by Lerner & Loewe. February 21-March 3
The Actress, romantic comedy by Peter Quilter. March 27-April 5
Ticket prices are $300 for regular shows, and $350 for My Fair Lady. The price of this year’s season ticket will be $1300 for five shows, including a $300 theatre membership. Starting this year, you can now pay for show or season tickets (at the Box Office only) by credit or debit card.
For season tickets, check This email address is being protected from spambots. You need JavaScript enabled to view it. and www.lakesidelittletheatre.com for information.
HOW DOES YOUR GARDEN BLOOM?
It blooms very well for members of the Lake Chapala Garden Club. 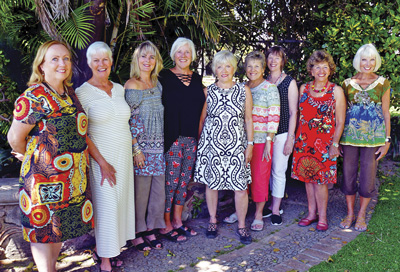 The Club meets the third Wednesday of every month for a local garden tour, followed by lunch at La Nueva Posada.  Membership is open to all. Visit their website at lakechapalagardenclub.org.
WHEN YOU TURN 95…… 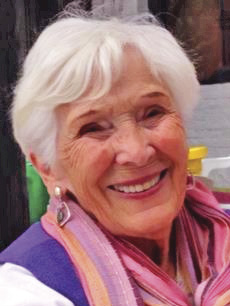 …and look as good as Lois Schroff, you too can get a birthday writeup in Lakeside Living.  She celebrated her 95th with her friends last month at La Bodega with dinner, cake and dancing.
Lois has been a local resident for the past 14 years Recently her watercolors were on display in her one-woman show at the Gallery/Café La 133 in San Antonio. As President of the Lake Chapala Painting Guild for the past seven years, she guided the group into exhibition successes locally and at the Pacific Coast. One of her watercolors earned second place in the recent Ajijic Society of the Arts judged show.
What a beautiful lady! Many happy returns, Lois!
LOOK AT ALL THEY’VE DONE
This year was the 50th Anniversary of the founding of the Centro Educativo Jaltepec, the Tecnico Universitario en Hoteleria & Hospitalidad.

A 50th Anniversary celebration mass and luncheon was held in perfect weather on the school grounds. The beloved Virgin of Zapopan arrived in her own private vehicle and hundreds of people came to celebrate a special outdoor mass in a beautiful flower filled tent overlooking the lake. The students then served an elegant lunch for the 400 VIP guests who are  Jaltepec’s major supporters.
Jalatepec is proud of its graduates and current students, not to mention staff.  At the luncheon, Linda Buckthorp received a special award to recognize her contribution as the Community Facilitator and President of the Lakeside Scholarship Program over the past 20 years.
A special moment occurred when Lulu, a 1990 graduate who is currently the Hospitality Manager of the Dodgers Stadium in Los Angeles, came to say thank you for helping girls like her achieve success and go beyond their wildest dreams.
Another successful alumna is Adriana Rameño of Adri’s Repostería. She lives in San Juan Cosalá. For more than 10 years she had been selling cakes and cookies on Ajijic’s malecon. Every weekend she sold her cakes, jellies and cookies from a small shopping cart. Her clients motivated her to set up a pastry shop and she invested a large part of her savings to open her own business.
Adri’s Repostería is located at #36 Hidalgo in Ajijic. Adri gives Jaltepec credit for her culinary expertise and business training because without the experience of being educated at Jaltepec, she would not have been able to start her business.
Linda Buckthorp was in Morelia in January and visited the bakery of a 1991 alumna, Angelina Delgado Plaza. Angela’s Bakery’s products are all made from organic/healthy ingredients. She is now making mole and will soon start to sell this product in Guadalajara in a powder form. A percentage of the profits will be donated to Jaltepec in appreciation for what Jaltepec has done for her and her family. 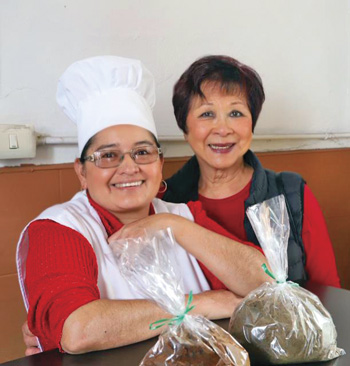 Angelina has been in business for 20 years. Ten years ago she bought the property that she was renting and filled it with commercial equipment. She also purchased another property close by for her and her parents whom she cares for, as well as her sister in Guadalajara.
A NICE MONTHLY MEETING
Lakeside Singles  provides a way for single people in the Lake Chapala area to meet and interact with other singles.  Ron Bowra is the go-to guy who sets up events and mail notices. Members meet once a month at different restaurants. The club has been in existence for 12 years.

In April, the group of about 30 met at the Blue Moon. Other venues recently have been the Brew House, Manix, El Barco and La Nueva Posada.  Ron says, “A lot of people don’t have cars and we try to schedule events where they can get to them easily.”
Notice of planned events is accomplished via email notices sent to those on the mailing list as well as noted on this site. You can contact Lakeside Singles by sending an email to This email address is being protected from spambots. You need JavaScript enabled to view it..
COBBLESTONES AND POTHOLES
Some of us would be happy if we never saw another cobblestone or pothole. But there’s a new theory that might get us into a more accepting state of mind.
Here’s how it goes: there are so many artists here at Lakeside that eventually people with a lot of money and artistic pretensions will start coming in and taking over and pricing out the poor and talented, which has happened in other places.  But here’s the stopper. Rich people don’t like cobblestones and potholes. We at Lakeside are therefore safe from gentrification! (Don’t forget you heard this here first).
FERIA MAESTRO DEL ARTE
It’s not too soon to think about the 18th Annual Feria Maestro del Arte. It will be held on November 8-10 at the Chapala Yacht Club.
Returning and new artists from all over Mexico will demonstrate and sell their works. Buyers also come from all over Mexico; we are lucky to have such an important event here at Lakeside.
Here is a representative piece, an alejibre, created by Felipe Bentiz Miranda of Guanajuato, a Nahuatl tlacuilo (painter).