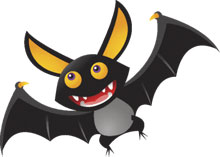 Friday evening my husband, who shall be known as MOTH, (Man Of The House) and I were sitting in the living room idly watching TV and checking our email when out of the corner of my eye I noticed the MOTH suddenly sit back in his seat.

Fascinated I got out of my chair and looked around the living room just as a black triangle sailed over my head like a stealth bomber.  As I turned to get a better look at the intruder, it made a second pass - so I ducked.

Meanwhile, the MOTH was running around shutting inside doors and opening outside doors in hopes the creature would fly out on its own.

No such luck.  It vanished and so we waited. Ten minutes later it flew across the room again and the MOTH opened the door to the kitchen while it made a very graceful landing on the café curtains.

After opening both doors to the outside, the MOTH (armed with a broom and a towel) skillfully poked at the curtains until something black fell out. The MOTH shrieked “Yikes” and the chase was on.

Showing mercy on our household, the bat headed for the open door to freedom, to find dinner and a place to roost for the evening and the MOTH and I settled back into our easy chairs and returned to the TV.  Just another day in Mexico.

P.S.  We filled all the large trash bags we could find with crushed newspaper and stuffed them up the two fireplaces to keep the flora and fauna in their proper place! 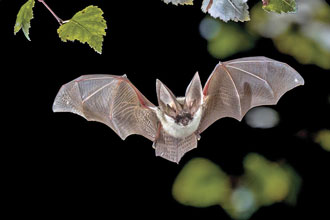 Bats!
Bats! By Mark Sconce   A recent New Yorker magazine memo from the Dept. of Versifying caught my eye. It features an Army physician/poet on his