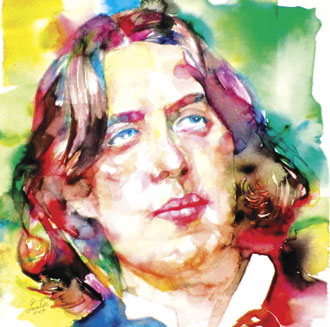 My pen has lost its disposition
To mar the fleeting page with verse;
For other, colder dreams I nurse,
And sterner cares now seek admission;
And mid the hum and hush of life,
They haunt my soul with dreams of strife.
A.S. Pushkin Trans. James Falen

I wonder what the farm wives told their husbands, fresh from the fields of Kansas and Nebraska? “Dear, we’re going to the high school gymnasium after supper to hear a famous fellow from England. They say he’s a very cultured Englishman, but the paper says his lines are Irish, like ours. Says he’s a poet and writes plays in London town. Put on your Sunday duds, Homer. And stop snapping your galluses.”
And off they went that evening to the school gymnasium where a large crowd was gathering and dressed as though it were Sunday. Typically, the mayor or a local lady of breeding would introduce the honored guest. Tall (6’3”) with an aura of self-assurance, Oscar Wilde strode onstage holding a single white lily, symbol of his aesthetic philosophy. His wavy brown hair was parted in the middle and curled behind his ears. His oval, smooth-shaven face was marked by a slight Roman nose and certainly sensuous lips.
Audience members could be forgiven for gawking at this fine fellow, a dapper dandy, wearing his favorite “Lincoln green, otter-lined, seal-trimmed overcoat with frogged-closures, extra wide cuffs and a deep-notched collar with a big black bow at the throat.” Knee breeches highlighted black silk stockings and patent-leather slippers with bows. Whether that night he lectured on The House Beautiful or The Decorative Arts or The English Renaissance or simply recited poetry, he conveyed the central idea of his aesthetic view of life, namely, that beauty and pleasure in all aspects of life and art mark the exemplary life, a life well-spent. His famed wit was also on full display, beginning when he arrived in America, January of 1892. Asked at Customs if he had anything to declare, he replied, “Only my genius, sir.” He began his lecture tour in New York with stops in Philadelphia, Washington (which he hated), Baltimore, Albany, Boston and New Haven and more.
Assuming center stage, he might be moved to quip, “I never travel without my diary. One should always have something sensational to read in the train.” Or offer his take on war: “As long as war is regarded as wicked, it will always have its fascination. When it is looked upon as vulgar, it will cease to be popular.”
Or simply be moved to recite: “And down the long and silent street, The dawn, with silver-sandaled feet, Crept like a frightened girl.”
Then, onward into the “cultural wastelands” of the American interior: Prairie, buffaloes, elk, Indians; Aurora, Peoria, Dubuque, Sioux City, Omaha, Fremont. He gave over 140 lectures and presentations! It seemed the only invitations he declined were those in Griggsville, Kansas where local worthies had invited him to lecture on aesthetics. Wilde couldn’t attend but cabled: Begin By Changing The Name Of Your Town.
The other invitation he “postponed indefinitely” came from a gentleman in Ohio: “If Mr. Oscar Wilde will leave his lilies and daffodils and come to Cincinnati, we will undertake to show him how to deprive thirty hogs of their intestines in one minute.”
Throughout his nearly year-long tour in North America, from sea to shining sea, from the Gulf of Mexico to Montreal, Wilde was mocked and ridiculed in the press, skewered by the likes of Henry James (“a tenth-rate cad and an unclean beast”) but fêted and received warmly by polite society, especially by ladies of fashion. Receptions and dinners in the most fashionable salons were given in his honor. Wilde’s social status increased considerably.
Back in England, besides offering his views on America, he was at the top of his game with hit plays like Lady Windermere’s Fan, A Woman of No Importance and his last, most popular play, The Importance of Being Earnest, mercilessly exposing Victorian hypocrisies through biting satire.
Alas, the good times came to an abrupt end. I wonder what the good wives of those prairie farmers back in the Midwest thought when they read in the papers that Oscar Wilde had been convicted of “acts of gross indecency in private with his own sex” and sentenced to two years hard labor for having been “the centre of a circle of extensive corruption of the most hideous kind among young men.” Or as his main lover, Lord Alfred Douglas, famously put it, “I am the Love that dare not speak its name.”
To read accounts of the trials, for there were two, I come away realizing that Wilde’s behavior, cringe worthy though it was, would not convict him in a modern court. But 1897, Victorian England had other thoughts: “…some prostitutes were seen to kick up their skirts with glee at the news. “ ‘E’ll ‘ave ‘is ‘air cut reglar now!” shouted one onlooker, provoking a “loud chorus of laughter and jeering from others.” The Crown established a link between aestheticism and depravity that proved persuasive to a jury, judge and the public.
Prison was “hideous” to a sensitive soul confined to a solitary cell except when executing “hard labour.” With help from a friend in high places, Oscar was finally allowed to have pen and paper. It saved him from insanity.
I know not whether laws be right,
Or whether laws be wrong;
All that we know who lie in gaol
Is that the wall is strong;
And that each day is like a year,
A year whose days are long.

I never saw a man who looked
With such a wistful eye
Upon that little tent of blue
Which prisoners call the sky.

Oscar Wilde was released from prison in May of 1897 having served two years to the day. By that time, his wife Constance and their two young sons had fled to Switzerland and changed the family name, never to see Oscar again. He lost his family, his career, his income, his reputation and his adoring public. He wandered around Europe for some years, poverty stricken, sickened both physically and spiritually.
He came to rest in the shabby Hôtel d’Alsace in Paris where he died of meningitis at age 46. Even at the last, he gathered his wits and said, “This wallpaper and I are fighting a duel to the death. Either it goes or I do.” Father Cuthbert Dunne administered Extreme Unction to an Irish son. Oscar rests in the same French cemetery as Albert Camus, the apostle of the absurd.
Some would argue that Wilde’s incarceration produced two gems that we wouldn’t have otherwise: The Ballad of Reading Gaol, a scathing indictment of the Victorian penal system and De Profundis (from the depths), a letter to his erstwhile lover—the blame, the shame, the suffering. After that, he told a friend: “I can write, but have lost the joy of writing.” The reading and theatre-going public were thus deprived of his inarguable potential. He could have had 30 more years to create masterpieces like The Picture of Dorian Gray, The Importance of Being Earnest, Salomé , An Ideal Husband and many more.
Thus, do the lurid details of his life vie with his considerable contributions to English Literature. The affair also teaches us the damage that orthodox zealotry can do...