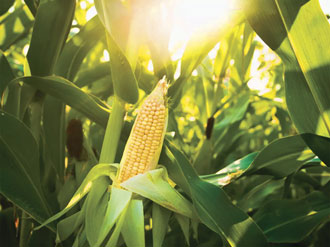 Maize was the grain (corn) that allowed the Maya to abandon their nomadic lifestyle and flourish to the height of their civilization. They, in turn, nurtured and venerated this amazing plant to the point that it decorated their myths, art, and landscape like no other food.

Maize comprised 75% to 85% of the ancient Maya diet. It was grown in milpas, small plots, with beans and squash, forming the “Trinity of the American Indian.” Maize was ground into dough on a stone metate. Tortillas were made by placing dough balls on a warm banana leaf, which was rubbed with ash, pressed flat, peeled off, and then patted by hand into disks. They were cooked on a hot, clay cornal, then eaten plain, with stews, vegetables, or meats. For 2000 years, the distinct, slapping sound of hands flattening tortillas has been heard throughout Mesoamerica. Pozole, atole, and tamales are ancient recipes of maize.

The creation of the Maya people and maize is documented in archeological records and the Popol Vuh, one of the few Mayan documents to survive the decimation of the Spanish. The Popol Vuh, an epic written by an anonymous Quiché Maya, tells how the Earth originally existed only as a calm, empty sea. The sky was a vast expanse, void, motionless, and dark. Then, The Creator (Tepeu), The Maker (Gucumatz), and The Forefathers got together and divided the sea. Mountains, valleys and rivers were formed.

The Creators and Makers tried again, carving the men from wood this time. These “looked like men, talked like men and populated” the Earth, but they had no souls, nor minds. The wooden men were destroyed by flood, and those who escaped to the trees became monkeys. This was the Third Creation.

At this time, the two sons of the Creator and Maker, named Hun-Hunahpú and Vucub-Hunahpú, were playing ball one day, when their noise angered the evil Lords of Xibalba, the Underworld. The youths were summoned to come and play ball and they went. The Lords sacrificed the two and severed the head of Hun-Hunahpú, which they hung in a calabash tree. The head could not be discerned from the other fruits and the tree was forbidden by all. They buried the bodies of Hun-Hunahpú and Vucub-Hunahpú in the ball court of Xibalba.

One day Xquic (Lady Blood), the daughter of a Xibalba lord, ventured to the calabash tree. She stretched out her hand to a fruit, the skull of Hun-Hunahpú, which spoke to her, then spat in her hand. Lady Blood became pregnant. She was sentenced to death by her father, but escaped to Earth and gave birth to the Hero Twins, Hunahpú and Xabalanque.

The Twins were playing ball one day when they, too, disturbed the Lords of Xibalba and were summoned below to play ball. The Youths went, but tricked the Lords, destroyed their Rulers, and vowed to venerate the names of their fathers.

Hun-Hunahpú and Vucub-Hunahpú, the father and uncle of The Hero Twins, were resurrected, and became the Maize Gods. They placed the three stones for the Hearth of Creation and the four cardinal points of the cosmos. They created the sacred ceiba tree, which formed the Milky Way and set the stage for the Fourth Creation on August 14, 3114 B.C., the end of the last Great Cycle. The Maize Gods remained in the ball court of Xibalba, where one must go to worship them and it symbolized maize, the seeds of which were “planted” in the Underworld, rose to Earth and nourished the next creation.

The Hero Twins rose to the Heavens and became The Sun and The Moon. Under their light, the river at Paxil and Cayalá parted and the ears of maize sprang forth. The Creators and Makers took this maize and formed the shape of four men, who turned out to be “intelligent, good and handsome” and gave thanks for their creation. They were the Fourth Creation, the ancestors of the Maya. A new Great Cycle began, the current one, which, as foretold by the Maya, would be destroyed December 12, 2012.

Numerous studies have been conducted to determine the origins of maize (Zea mays), but when and where cultivation began is still unknown. Maize is believed by some to be the domestication of a wild corn called teosinte, (Nahatl for “godly corn”). Cobs of this sort have been found in caves near Puebla dating 5000 B.C. Teosinte is found in the highlands of Guatemala, leading many to believe its domestication began in this area.

The earliest evidence of domesticated maize has been found near Puebla dating 3500 B.C. The late Sylvanus G. Morley, author of “The Maya Civilization,” believed it was first grown by the Maya.

For certain, the cultivation of maize coincided directly with the tremendous rise of the Maya civilization and was so esteemed by them that the foreheads of babies were lengthened to resemble an ear of maize. Men of maize or maize of men? This intimacy was a gift of the Gods.