“A Flickering Flame In The Dark Night” 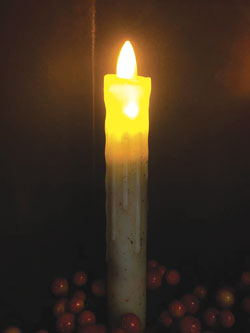 Sor Juana Inés de la Cruz, the greatest writer of Mexico’s 17th century, has been described by a contemporary poet as “A flickering flame in the dark night of Colonial Times.” Her name was Juana Inés de Asbaje y Ramírez de Santillana, but upon entering the San Jerónimo’s Convent in Mexico City, she became Sor Juana Inés de la Cruz. The writings of this passionate young nun have touched and influenced the minds of every Spanish-speaking person interested in literature.

The world knows very little about the first years of her life, except the outstanding occurrences that speak of her genius. At the age of three, she taught herself to read, and when she was seven, she learned Latin in twenty lessons. Legend says that often she cut ten centimeters off her beautiful hair. If she didn’t learn the most difficult lesson of the week, she cut it again. In those days women always had long hair; therefore, Juana learned her lessons and thus avoided the self-inflicted punishment of having her hair sheared.

The Viceroy, Marquis of Mancera, and his wife heard of the talented child, who could write poetry of outstanding quality at age eight, and requested that she become a Lady-in-Waiting of the Vice-queen, the Marchioness of Mancera. By the time she joined the Court, Juana spoke Latin and Nahuatl, was knowledgeable in music and science, was beautiful and had a charm that left no one untouched, male or female. The Viceroy was obviously fascinated by Juana’s culture.

When she was fifteen, he wanted to know if really this child’s mind was as advanced as he and wife thought. He invited forty wise men, from the church and the university, to test her scholastic achievements. Everyone was present for the occasion: The main doctors of the Royal Pontifical University, the wiser clergymen, the poets of the time, the outstanding judicial minds, the principal ladies and gentlemen of the court. One could imagine the mixture of habits, gowns, robes, farthingales, hoop skirts and bejeweled people that anxiously waited for the examination to start. No similar act had taken place in the Vice-regal palace. It was going to be an occasion never repeated in the history of Mexico.

Fifteen year old Juana, dressed in the style of the 17th century court, with jewels given to her by the monarchs, faced a unique ordeal. For several hours she was bombarded with questions that went from law to astronomy, literature, medicine, linguistics, mathematics and many other topics. Later the Viceroy said that the young woman defended herself from the inquiries of her inquisitors like a frigate against the fire of the enemy. And she finished the battle with flying colors, having defeated those who wanted to destroy her reputation or diminish the glowing sphere of influence she had with the Viceroy and his wife.

In the Mexico of the 17th century, a woman, by the age of 18 or 19, had only two choices in life. Either marry or become a nun. Who could Juana marry? An illiterate military with a high rank but lacking a formal education of the mind? A rich criollo who would want her at home having children and not reading books all the time? A pedantic university professor who would be jealous of her knowledge? A man of science who would dispute her ideas on the subject? Obviously, there were no satisfactory suitors; therefore, Juana chose the convent. She first entered the Carmelite Order, but found the austere discipline too rigorous and left to join the Jeronymite Order. She became Sor Juana Inés de la Cruz. (Sister Jane Inés of the Cross.)

The Convent of San Jerónimo in the outskirts of Mexico City (now surrounded by a chic residential area), was spacious and bright, with a church where nuns assisted in the religious ceremonies behind a wrought iron grill. Every nun had a large cell, and three or four servant maids who took care of their daily needs.

In a city of 100,000 people, there were 29 monasteries and 22 nunneries. This meant that a substantial part of the population was secluded from the life of the city and dedicated mainly to scholastic endeavors. The beauty of Sor Juana was portrayed by the best artists of the time, and they show a young woman of black expressive hands. And a billboard under her chin.

This outstanding young woman from age 19 on to her death respected the vows of chastity, poverty and obedience and wrote some of the best literature, prose and poetry in all the history of Mexican Letters. She portrays in poetry everything that life denied her and speaks of love as very few people have done. She does not speak to anybody in particular, but speaks of the love she herself felt all her life and was unable to give to someone. Her transparent style responds to the intensity of her feelings. She castigates the cruelty and arrogance of men and she appears before the imaginary beloved as a woman who only has her tears to show the essence of her passion.

Eventually, a plague, which took thousands of lives in the city, entered the Convent and Sor Juana Inés de la Cruz and a dozen other nuns succumbed to it. Sor Juana died on April 17th, 1695, at the age of forty-three, but she is still very much in the hearts of the lovers of literature the world over, a flickering flame that has never been extinguished.