Space From Other People And Living In The Moment 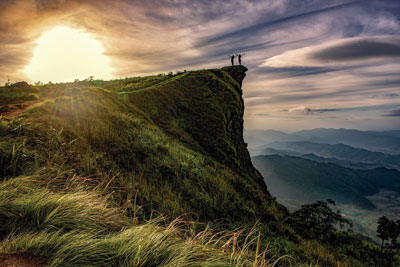 “The world today is sick to its thin blood for lack of elemental things, for fire before the hands, for water welling from the earth, for air, for the dear earth itself underfoot.”

A short time ago, there was a program on Public Television depicting the experiences of the first Outward Bound class ever to consist entirely of a group of young women. The year was 1965, and it was insisted at the time, mostly by men, that women could not endure lengthy periods of hardship in the wilderness. However, this class of determined young persons triumphed far above society’s limited expectations. The Outward Bound adventure became a life changing experience for them. As they learned basic survival skills, canoed across wilderness lakes and rivers, suffered the hardships of the portage and the trail, it was said on several occasions that they found themselves “living in the moment”.

I recently encountered a Norwegian word “friluftsliv”, that essentially means space from other people, mostly space in nature. On many occasions, I have been blessed to have lived in the moment, nearly always when submerged in the natural world, more specifically, when I have gone solo, removed as far as possible from the sound of the human voice and all other noise, all the fluff and nonsense of the manmade world. On those all too rare occasions, I have experienced friluftsliv.

The outdoor writer Robert Ruark once observed, “The world is filled with fine fragmentary thoughts killed at birth by the interruptions of damned fools.”

Indeed, the deepest of thoughts and reflections can be blasted to perdition by the cacophony of the human voice. A short time ago, on a scintillating autumn day, I spent several hours in one of my favorite places, Garbry’s Big Woods Preserve, a county nature park about seven miles east of my wife LaVon’s hometown of Piqua, Ohio. Garbry’s Woods consists of 172 acres of timber, wetland and briar patch. I have strode across those briar covered acres on numerous occasions, ever aware that such places were the favorite lair of Brer Rabbit and others of his long eared trickster species.

Like the ancient Greeks who sought the wisdom of Zeus by harkening to his voice as it wafted in the wind among the upper branches of a grove of sacred oaks at Dodona, I craved time with nature and with nature’s Creator. As on many occasions over the years, I had the place to myself. The only voices I overheard at first were those of several angry blue jays squabbling among the branches of a maple tree. I am clueless as to the nature of their dispute, probably territorial. Mark Twain advised that no other animal can cuss quite as enthusiastically as a blue jay, an observation that I concur with. I paused  to listen to their sharp, angry cries for some time, wondering if I should attempt to mediate before they set to work with their rapier beaks and caused lasting damage.

While pausing beneath the canopy of a favorite stand of stately poplars, I was startled to see a small flight of turkey buzzards gliding in my direction and circling in greedy expectation  low overhead. “Not yet, Guys,” I called to them.

They sailed off but returned several times, as though to check and be certain that my demise still lay somewhere in the future. Having one’s earthly remains devoured by coyotes and turkey buzzards doesn’t seem like the worst of fates, much like Tibetan sky burial. Someone might as well derive some good from a person’s mortal remains. Otherwise, it seems such a waste.

I spent most of my time beneath that grove of talkative poplars, as Zypherus, God of the West Wind, buffeted the branches with gust after gust.  There are few sounds more musical than that of wind among the treetops. Only wind among the stalks of an autumn cornfield come close.

Many Native American peoples sensed the presence of spirits in all things, even rocks. St. Thomas Aquinus posited that all living things have souls, and the fourteenth century mystic Meister Eckert preached that God is in all things and that all things are in God. Such thoughts resonated deeply on that windy, tumultuous autumn day.

Following a trail into the woods, I was pleased to see that the walnut trees had been busily strewing their gifts across the leafy floor. The Ojibwe refer to trees as the Standing People. Walnuts and all other nuts continue to be considered gifts of the Standing People. I always bring some small thing home from the woods. This time, it was a rounded prickly outer shell  containing a gift from the buckeye tree. A few days later, it “hatched”, providing me with two large buckeyes, shimmering in their shiny mahogany coats.

My grandfather always said that carrying a buckeye in one’s pocket would fend off rheumatism. I have always carried one. At the age of 78, I have never yet had rheumatism. Perhaps the folk wisdom of those who have gone before us should be taken more seriously.

I left the woods refreshed in mind, body and soul, as I always do. The buckeyes in my pocket will serve as valued souvenirs, much like worry beads, from yet another all too short period of silence, solitude and simplicity.