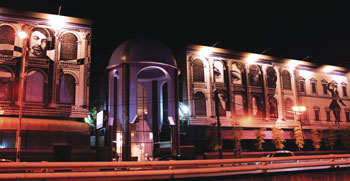 A modern blue and white façade catches the eye of the visitor, as she enters the theatre minutes before the show begins. She walks to a domed pavilion which is also the signature image of the theatre, along with hundreds of excited patrons of different ages, and backgrounds. Once inside, an impressive chandelier lights the stairs and below is the welcoming lobby, covered in cream-colored marble with two concessions filled with refreshments. Along the wall there are snug couches to sip one’s beverage while awaiting the opening or relaxing during the intermission.

The Teatro Galerías, located in Guadalajara, has hosted sixty percent of all cultural events fostered by the city since 1991. This August, the Theatre celebrated its twenty-third anniversary of entertaining people in Guadalajara and around the world with a range of quality and diverse plays such as Peter Pan, The Woman in Black, La Senora Presidenta and Las Obras Completas de William Shakespeare. This latter play was a big hit with Shakespeare fans and local teachers. It featured Diego Luna and other notable Mexican actors doing short scenes from some of the more famous Shakespeare plays such as Hamlet and Romeo and Juliet.

Avenida Lapizlazuli, the locale of this theatre, used to be a compact mall called “Plaza Bonaventura”, which hosted four movie complexes called “Salas Lumiere.” The owner was Mr. Arturo Méndez Valencia, who envisioned a theatre which would have a diverse set of shows that would satisfy a more sophisticated tapatío audience. Construction began two years before its opening night, and during that time there was a myriad of hardships, most notably the fact that the tower was built higher and narrower than expected, leaving no room for the elegant and intimate dressing rooms Mr. Méndez had in mind.

However, the play Out of Order by Ray Cooney opened to the public that August to rave reviews. Even though it was a pleasant theatre, it still had many details that were not up to the standard of elegance that Mr. Méndez had in mind. So, a month after the release of Out of Order the whole bottom section was remodeled in order to enhance aesthetics and audience comfort. Changes included an improvement to the isoptics and acoustics, reduction of the number of seats, and more comfortable stairs. For the convenience of patrons, Mr. Méndez also added a parking lot.

Today, it can seat over one thousand eight hundred people and has comfortable dressing rooms that will satisfy  the most self-indulgent diva. In addition, there are three parking lots for patrons. For the twenty-three years it has entertained the tapatío audience, its motto has never changed: the audience is always right. Mr. Mendez´s words still resonate in each employee’s mind while hosting: “It´s not a crammed theatre, the people are first for us, the people dictate.” In other words, if the theatre sells out, that’s it. There is no standing audience or doubling up. The audience comfort and satisfaction is primary.

One example of how this works was the concert of the well-known Guatemalan singer Ricardo Arjona. Struck by both the intimacy of the audience singer arrangement and the warmth of the audience, he said: “Teatro Galerias was my most personal experience with an audience--ever”

But all is not sweetness and light. Sometimes the stage is raucous with the beat of a different drummer as when “Stomp” hit Guadalajara. Matchboxes, brooms, garbage cans, Zippo lighters and more filled the stage with energizing beats of this British group, for an inventive and invigorating stage show that was dance, music and theatrical performance blended together. For the more conservative patron there are many classical concerts, ballet performances and even opera. There are also English and bilingual performances. Teatro Galerias has it all.

(Luciana Mendez is an Advanced Placement student at the American School Foundation of Guadalajara. She writes for the literary magazine, Sin Fronteras. She would really like to thank Dr. Hogan, since he has helped her grow as a student and a person. “Plus, he is really awesome,” she says.)