Ramblings From The Ranch 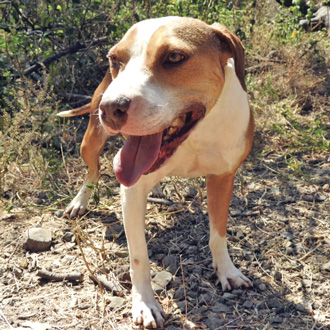 Sometimes people ask me how long dogs stay at The Ranch before getting adopted. Well, it depends. Rodrigo was found as a stray at The Racquet Club. The couple who found him tried to integrate him into their family, but Rodrigo couldn’t make it work. He did not like the female dog who adored him, and he kept pestering the male who despised him.

Alas, Rodrigo came to The Ranch in 2017. From the start, he was a difficult guy. He loved all the people he came across but he could be really ornery with the other dogs. Eventually, the staff gave up trying to find him a “roommate” and Rodrigo was kenneled by himself. A generous volunteer paid for Rodrigo to go to dog school to see if he could learn to love other members of his own species. While he got a little better, he still was not well-mannered enough to get a roommate.

Rodrigo remained a favorite of the volunteers, though. He was a funny guy who would sometimes just lie down on his walks and refuse to budge. And every day, he was the eager one who “helped out” at feeding time by cleaning the soup bucket.

In September, Angela Adams, the founder of Born Again Pit Bull Rescue in Portland, Oregon, came to visit. Like many before her, she became smitten by Rodrigo and sent for him as soon as she found a perfect foster home. There wasn’t a dry eye at The Ranch when it was announced that Rodrigo was going to get adopted! In December, his favorite volunteers cooked him some hot dogs over an open fire and celebrated his good fortune. Then the little guy climbed into a crate and took his flight to freedom.

It takes a long time for some dogs to find their forever homes. In the meantime, you can help by: walking dogs at The Ranch; fostering flying dogs “up North”; and by donating funds to feed and care for these special canines! For more information please contact The Ranch: www.lakesidespayandneuter.com or 331.270.4447. 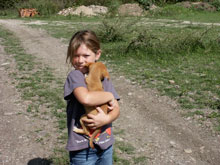