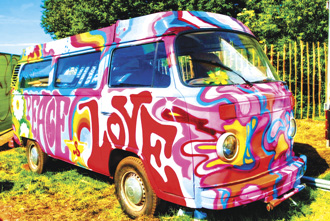 Old friends wiggled into the van, all except Cathy. Danny stopped her. “You’re not getting into this car without your diaper, honey,” he said. “I don’t want another mess.” Everybody laughed.

“Don’t worry, sweetie,” she said. “I got it and one for you, if you need it.” She showed him the diaper covering her head. They all laughed.

“Like I was saying, before being upstaged,” Barb said, “I ran into Bill my old boyfriend. He said he was in the hospital and had the same doctor that I had; very good doctor. He was the brother of my boss, the Mayor. Boy, that Bill is still good looking. I was at the village hall for thirty years. I shouldn’t let Bill get away.”

Cathy turned to the back seat and said, “I’m a grandmother again!”

“Will you shut your trap and don’t interrupt me,” Barb said. “The Mayor told me to see his brother the doctor. It probably saved my life. Bill said we should get together again, cha-cha-cha. I had that stomach thing but the Doc fixed it good. Bill is still good looking; got all his hair. The Mayor kept that village running beautiful. Saw the Doc on the street last week and he says, ‘Barb, don’t be eating no seeds and nuts; I don’t want you going down again.’ He-he. I ran into Bill at McDonald’s getting a hamburger if you can believe that.”

Suddenly Rick threw up his arms and yelled, “Stop it! You’re telling three stories at the same time, you crazy loon. I can’t take it anymore.” Everyone laughed.

“By the way,” Liz said, “where are we going, again.” She lit a cigarette. Cathy turned to the back seat and blurted out, “I’m a grandma again.”

“We’re taking a ride to Gene and Jude’s for hotdogs,” Danny said. “Can’t you remember anything?”

“Michelangelo’s, oh hell yes, I love those little wiener’s,” Liz said. “Not yours Danny. I only remember what I have to. There’s not much room left to remember new stuff. Ha ha ha.” Cathy turned around again and hollered, “I can’t believe I’m a grandmother again. I’m so happy. He’s a big boy.”

“Stop interrupting!” Barb shouted. You’re so ruuude, ugh.” She grabbed Liz’s hand with the cigarette. “Put that thing out,” she said. She threw it out the window. They started flaying and slapping each other, laughing then doing, “Pat-a-cake, pat-a-cake, baker’s man...”

“Stop the car,” Rick shouted. You people are nuts. You lost your mind. I can’t take it anymore; let me out.”

The next day the friends went to Rick’s home. “What do you want,” he said. “I told you I never want to see you again. You people have lost your marbles. And who are you?”

A women stepped up. “I’m a nurse,” she said. “Your friends asked me to help them with this intervention. They said you have been very intolerant and angry, lately.”

Rick started screaming, “Get out! Get out!” Two white coats came into the room. They restrained him and fastened him to a gurney. “It’s going to be ok,” Barb said. “They’re taking you to the hospital for rest and evaluation and maybe some medicine. You’ve been acting a little crazy lately.”