The Image Of Mexico

By Herbert W. Piekow
(From the Ojo Archives) 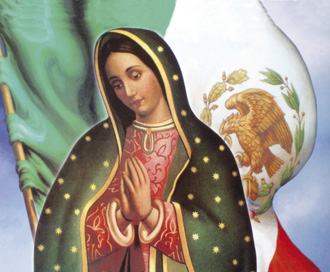 No image is more revered by Mexicans than that of the Virgin of Guadalupe. She appears on shirts worn by macho men, sewn onto school bags carried by students, as an emblem of faith around the necks of both sexes. The image of the Virgin of Guadalupe is proudly carried in public parades and in religious processions. Hidalgo carried her image in battle; his banner is preserved in the National Museum in Mexico City. Felix Fernandez, one of Mexico’s first presidents, even changed his name to Guadalupe Victoria.

Four hundred and eighty years ago on Saturday. December 9, 1531 Juan Diego, an indigenous 57-year-old peasant, had a vision of a dark-skinned young woman who spoke to him in his native Nahuatl. She appeared to him in the darkness of early morning as he was on his way to Mass. His almost daily route took him across the cactus covered Tepayac hill, a little distance from Mexico City. There are two early scholarly writings concerning the four apparitions to Juan Diego and one apparition to his Uncle Juan Bernardino, one chronicle written in Spanish and the other in Nahuatl; they are basically the same and relay a similar sequence of events.

In the first apparition on December 9th, Juan Diego heard beautiful singing and wondered if he had died and was in the terrestrial paradise “which our elders had told us about.” Then he relates he heard a woman´s voice saying to him; “Juanito, Juan Dieguito.” He climbed the hill, to see who was calling him, he says he was not frightened, but on the contrary felt overjoyed.

When he reached the summit he says he saw a Lady, who stood and motioned him to approach. He says he marveled at her superhuman grandeur. “Her garments were shinning like the sun, the cliff where she rested her feet, pierced with glitter, resembling an anklet of precious stones, and the earth sparkled like the rainbow. The mezquites, nopales and other different weeds, which grow there, appeared like emeralds, their foliage like turquoise and their branches and thorns glistened like gold.” He says he bowed before her and listened to her words. “ . . . I wish that a temple be erected here quickly, so I may therein exhibit and give all my love . . . because I am your merciful mother . . .” She instructed him to “Call me and call my image Santa Maria de Guadalupe.”

It is believed that the word Guadalupe was actually a Spanish mistranslation of the local Aztec dialect. The word that was probably used was Coatallope which means “one who treads on snakes.” We have come to know her as Our Lady of Guadalupe or in Spanish Nuestra Señora de Guadalupe. The Santa Maria de Guadalupe told Juan Diego to go to the local bishop and tell him of her wishes for the temple.

Naturally, the bishop was dubious and asked Juan Diego to describe the events in detail. After listening to the humble man recount his experience, the bishop dismissed the peasant saying: “You will return. . .” Juan Diego felt frustrated after being sent away by the bishop because he knew the bishop thought the whole affair a fantasy. Returning a second time to the hill, Juan Diego had a similar encounter with the beautiful woman. He begged her to find another messenger, “someone of greater importance because I am nobody.” The apparition replied: “Hark, my son of the least, you must understand that I have many servants and messengers . . .”

The next day, Sunday, Juan Diego left his house, again before daybreak. After waiting for most of the day Juan Diego was once more admitted to the bishop, who asked many questions before ultimately dismissing Juan Diego by demanding that the man bring a sign from the apparition, not just words. The bishop instructed some of his men to follow the peasant, as sometimes happens in biblical stories; Juan Diego became invisible and disappeared into the crowd. The bishop´s men told the bishop that Juan Diego was nothing but a common liar and was attempting to mock the Catholic Church.

Late that afternoon Juan Diego returned to the hill, where once more he met with the apparition and informed her of the bishop´s demand for a sign. She told Juan Diego to return the next morning and she would give him a sign. However, on Monday his uncle, Juan Bernardino, was gravely ill and Juan Diego spent the day administering to his dying uncle.

Early Tuesday, December 12th, Juan Diego left to fetch a priest for his uncle; when he approached the hill he once more encountered the mysterious woman who said, “Do not be afflicted by the illness of your uncle, who will not die now of it. Be assured that he is now cured.”

Juan Diego was instructed to climb to the top, most barren and coldest part of the hill where December frost was a nightly occurrence. When he reached the summit he was astounded to see so many varieties of exquisite rosas de Castilla blooming. They were fragrant and covered with dewdrops of the night, each drop as perfect as a pearl. He gathered them all and placed them in his tilma. When he returned to the Lady from Heaven, she took each rose into her hands and replaced them back into the tilma. She instructed Juan Diego to open the cloak to only the bishop.

The bishop´s angry servants refused to grant Juan Diego an audience until overcome with curiosity they gathered around the humble peon and demanded to know what he guarded in his cloak. He would not open the cloak, but pulled aside a portion so they could see the roses. Each perfect rose gave off a heavenly perfume and the bishop’s majordomo admitted Juan Diego.

When he entered the bishop´s chambers, Juan Diego knelt before the prelate who listened as Juan Diego recounted the vision of the fourth apparition. The bishop demanded that Juan Diego open the cloth. The fragrant roses scattered to the floor at the bishop´s feet. Suddenly there appeared the drawing of the precious image of the Holy Mary, Mother of God. Today, the icon is displayed in the Basilica of Guadalupe.

It is fact that most agave tilmas last no more than 15 years, yet the tilma of Juan Diego is as “soft as silk” and “the fabric and pigments used were from no known source, whether animal, mineral or vegetable,” according to biochemist Richard Kuhn, who analyzed a sample of the fabric. Dr. Philip Serna Callahan, who photographed the icon under infrared light, says there are no sketches, corrections and visible brush strokes. Ophthalmologists who have examined the face confirm that the eyes of the Virgin reflect the image of a bearded man, and in fact reflect the ten people who were present when the cloak was opened to the bishop. They say, “The eyes look strangely ‘alive’ when examined.”

There is much that is significant about the Patroness of the Americas; she is more than the symbolic mother of Mexicans, but that of Mexican identity.