Culture Should Be Respected* 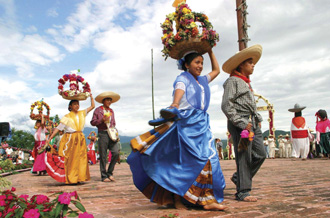 On completing our twelve weeks of ‘Survival’ training, my wife Iris and I returned to Mexico City where we anxiously awaited to see what State and village, and to which Indigenas language we would be assigned. We didn’t wait long. We were to take over from a Canadian couple. But first I had to go out on my own and spend around a month with this couple to get a ‘feel’ for the people and their ‘culture.’

The village is named Atliaca, about one hundred or so kilometers from the capital of Guerrero, Los Bravos or Chilpangcingo as it is called in Nahautl. The name Chilpangcingo literally means ‘the city of the bees’, and Atliaca, ‘water town’ which is a gross mistranslation because in those days the village had very little rain!

Our home would turn out to be made of mud/brick with a typical Indigenas thatched roof, and for sleeping purposes, a very small camper. There was one large room which was called the ‘clinic’ where pills of various kinds were handed out freely ‘only’ to the inhabitants of Atliaca but not to those from other surrounding villages which caused my medical/nursing background to raise disturbing questions !

This part of the State of Guerrero was highly infested with a highly poisonous variety of scorpion which had the habit of breeding in the thatch of roofs including our little home and work place. During the night they would silently climb down the white -washed painted walls of the ‘clinic and by daylight would congregate in their dozens, daring us to swat them. Our Canadian friends did have working arrangements with the Health Dept. ‘Salubridad’ In Los Bravos and always kept a supply of ‘anti-venom’ readily on hand for use if any of the villagers were stung.

Our friends would be leaving us their ‘small’ generator for us to use for our minimal electricity requirements which included a small refrigerator. Around my second week there was to be a special ‘fiesta’ by the village people which revolved around a parade of their ‘black virgin’ mother. It was a most solemn event and was ‘exclusively’ for the Indigenas members of the village and NOT for any stranger or gringos. My Canadian friends had always kept to the wishes of the village but now that they were leaving and Iris and I would be taking over, the husband decided to do the unthinkable and accompanied the village worshippers and took as many photos as he could of the procession and the not to be photographed ‘Black Virgin.’ I was disturbed by his action as was his wife who reminded him the importance of respecting the cultures of the peoples we were living with.

I had hardly returned to the outskirts of Mexico City when I received news that the village of Atliaca was in revolt. The revolt was headed by the city fathers because of the intentional intrusion by a gringo into their most sacred annual religious procession, and the photographing of their most highly venerated ‘Black Madonna.’

I had become close friends with the Public School Superintendent in Los Bravos and he in turn had access to the Governor of the State whom he personally knew, and it was decided that I, my Public School friend Juan, together with a posse of armed militia ordered by the Governor, and a young woman government attorney who would be the ‘arbitrator’ in this tinder box situation, would return to Atliaca immediately.

We had had news that a village mob had burned the little church down. What was most unnerving was the news that the more militant members of the mob were threatening to ‘lynch’ the leaders of that little church group which was closely associated with the person responsible for the uprising.

With the four armed militiamen, Juan, my Public School friend, the young woman attorney and myself packed into my WW2 Jeep, and on arrival in Atliaca were met by a large and angry group of surly men-folk. With great self-assurance our young attorney stood up in the Jeep and arbitrated with the justifiable angry inhabitants and finally peace and understanding was established. The threatened members were safely released, and I felt safe enough to walk around and greet some of the villagers I had gotten to make friends with in the short time I was in their village. ‘Culture’ needs to be respected!

*Ed. Note: This is a true story that happened many, many years ago. The writer and his wife were in Mexico under the sponsorship of a religious organization.