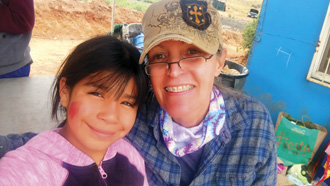 There are many different ways of forming a family. We are all familiar with the traditional: man and woman meet, fall in love, get married and have babies. Sometimes, however, things don´t go according to this “plan,” and we find that there are other ways to make a family. This is the story of ours.

It begins with me. At the time I was 33, and had been divorced for about a year. Having dealt with the emotional fallout of my divorce, I realized that the most painful part was the loss of the potential to have a family. One day, it came to me in what I think was a “moment of clarity.” I hadn´t lost anything. I could still have the family I wanted so very badly.

It seemed to me there was two options: I could have a baby or adopt one. I quickly ruled out the idea of having a baby. For me it didn´t seem a viable option. I happily decided that adoption was the way I would form my much desired family. My two best friends both had babies in 1997, and I saw that raising an infant was an exhausting task, even when shared by two people. I wanted to be realistic about what I, on my own, could do, and find the child to whom I could offer the most as a parent.

With this in mind, I decided to adopt an older child, age 6-10. Somehow, I’ve always known in my heart that I would have a daughter. I also believed that, as a single woman, I could offer more to a girl than to a boy. Some people would disagree, but I feel that it is more important for a boy to have a father than for a girl.

My parents had spent the last 14 winters in the Lake Chapala area of Mexico and made many friends. Among them was a lady from Guadalajara, Gloria. In December 1997, when my parents were leaving for Mexico, I asked my Mom to talk to Gloria and see if she had any connections which might help me adopt a child. There is no program between the Mexican and Canadian governments at this time, though this might change in the future. There are many children in Mexico who need families and many people in Canada with a lot of love to share. I have always felt a strong affinity for Mexico and its people, and speak Spanish. Some would say I have a “Mexican soul.”

In early 1998, my Mom called to say that Gloria had a friend, Adriana, who worked at Instituto Cabanas, one of the orphanages in Guadalajara. She had spoken with the ladies in charge of international adoptions, and they already had a little girl in mind for me. This little girl was completely “libre,” meaning she was legally free to be adopted. Was I interested?

I quickly wrote a letter by fax. The next afternoon, I received a bundle of papers by courier. I felt as if someone was trying to show me that this was the path. I completed the application package, which included an information sheet, a short autobiography, a medical, four letters of reference from friends, and a letter from my employer. All of these I translated into Spanish. Everything was ready for my planned trip to Mexico in February 1998.

When I arrived, I made an appointment with the Instituto Cabanas for a personal interview. The two ladies in charge seemed happy with me, and I was certainly impressed by them and by the Institute itself. Everyone seemed to really care for the children. They told me there was, indeed, a little girl of nine who was legally free to he adopted. They said she was very bright, warmhearted and was in excellent health. That was all I needed to know, and decided to proceed. As for the little girl’s new name, I chose “Margarita” for two reasons. It was my mother’s name, and also the name of my favorite drink.

In July of 1998, I received a package from Mexico—the best package of my life. In it was information about my daughter-to-be, including pictures. She was absolutely beautiful, and had just turned ten in May. Her name? Barbara Margarita, known as Maguito (little Maggie) or, as we would call her Maggie. My Mom had died in March when Mom was on her way home from Mexico. Now the family would have a new Margarita.

I sent Maggie a long letter, and pictures of her new family, our home, her school, etc. In August, I received my first letter from her. Again, we all cried many tears of happiness. My lawyer initiated the case in the courts. Our court date was set for December 8. We arrived in Mexico on December 5, after five days on the road. The morning of December 7, my lawyer phoned Instituto Cabanas. They told him that Maggie had already been to the office twice, saying that she didn´t think her Mommy was really going to come. We zoomed over there between my two appointments. After ten months of waiting, I was finally going to meet my daughter! Needless to say, it was very emotional for us both. I should have bought stock in Kleenex.

On December 8, we went to court. My parents traveled from Ajijic to accompany me. After the hearing, we went to Instituto Cabanas so my parents could meet their new granddaughter. To my surprise, the people at the Instituto said that we could take Maggie with us, even though there were eight more days of school. I wasn´t really prepared, but still jumped at the chance.

That’s about the end of our story. The rest involved a lot of waiting - for Maggie´s birth certificate, act of adoption, passport and entrance visa to Canada. Our new family is adjusting nicely, day by day. It has meant a lot of changes for all of us, including Maggie. She has never had a family, and I have never had a daughter, but we are both learning. I´m sure, with love and patience, we´ll both be fine. I have always felt that if you really want a child, there is one out there somewhere for you. I truly believe that Maggie is the child God meant for me to have. It just took us a little while to find each other.

*Ed. Note: This true story is one of the most heart-warming that we have ever published and for just that reason, we run it again every once in a while.