Reform Or Wither Away 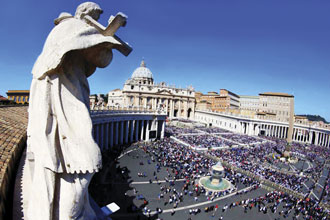 Several years ago, this column reviewed the international best-selling book, In God’s Name, which was written by a New York Times journalist by the name of Philip Yallop. The book had to do with Yallop’s investigation into the death of Pope John Paul I, who died under mysterious circumstances only a few weeks after assuming the spiritual guidance of the estimated one billion members of the Catholic Church.
After many months of searching for the facts behind the death of a youngish pope (who had been in excellent health), Yallop initially found that there had been no autopsy or even a formal Death Certificate. He also discovered a connection between the Vatican and the Italian Mafia, and actually disclosed the names of the people (in both camps) who were in charge of nurturing the nefarious relationship.
As for the motive for the crime, if indeed there had been one, the facts were equally as stunning: the new Pope had previously gone on record as promoting the idea that the priesthood should allow women to be members, that the Vatican had become the largest art gallery in the world and that the Church should hold the biggest auction in history, sell many of the paintings and artifacts and triple the Church’s help of the most needy of its brethren. He also vowed to terminate the Vatican’s cozy relationship with the Italian Mafia, and voiced the opinion that the Church’s stricture on contraception was outdated and patently unfair to the poor Catholics of the world, especially those in Africa.
Most striking of all, Yallop named the Vatican Secretary of State and other high-ranking Vatican officials as the perpetrators of the Pope’s death! (In all the years since then, there has not been a single lawsuit filed against either Yallop or his publisher.)
I was reminded of that column when I recently read that a Grand Jury in Pennsylvania has uncovered child sexual abuse cases involving some 1000 children, crimes perpetrated by more than 300 priests all across the entire state—and that further, the hierarchy of the Church had been covering up the crimes for many years.
Over the years, many priests have found a way to sublimate their sex drive and channel it into socially acceptable channels, but many others have not, finding release in unacceptable and even despicable ways such as sexually molesting children. Sigmund Freud warned us over a hundred years ago of the dangers in bottling up the sexual drive inherent in the human race.
The solution seems simple if radical, bucking as it does hundreds of years of hallowed tradition: allow priests and nuns to marry, or at the least have loving sexual but discreet relationships with those of their own choosing. The extreme discipline of a religious calling is difficult enough without having to give up one of the most basic desires of human beings.
As a rationale, we need look no further than the New Testament, for there is little if anything in that inspired book that indicated that Jesus Christ made chastity a precondition for any of his Twelve Apostles. Indeed, if memory serves, a few of them were married.
Child molestation incidents have haunted the Church for centuries, and this latest scandal in Pennsylvania that involves a cover-up of the crimes at the highest levels of the Church in America now has millions of Catholics doubting the decency of its own spiritual leaders. Time to reform or continue to wither. The Church has come to one of the most fateful cross-roads in its entire 2000 year-old history.