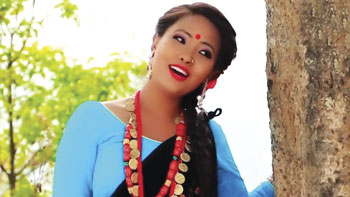 Let’s face it. Some languages sound better than others whether or not you understand the words and sentences. French comes to mind: Je t’aime. Je vous en prie, Si vous plait. Also Italian: Ciao Bella, Molto bene, Arivaderchi not to mention operatic arias that live forever…

But of all the languages that best match sound to meaning, I choose Nepali and Hindi. Especially in the lyrics of songs. Take this Nepali ditty. Dhalaki, dhalaki na hirna nani. Roughly, don’t walk away swaying your hips like that. Dhalaki, dhalaki describes the hips he longs to see again. Nepalis like repetitions and rhymes, much like cockney. Here’s one: Rangi-changi means multi-colored; Chili-milli means flashing lights. But the one I’ll always remember is Cheez- beez. Translation—tchotchkes, baubles, knickknacks, and gimcracks. And how do Nepalis say WOW? For nearly a thousand years, they’ve said Bhaprebhap!

It’s fun to hear the schoolchildren walking home on a foothill path singing the Nepali alphabet, Ka, kha, ga, gha, na; cha, chha, ja, jha, ya; pa, pha, ba, bha, ma. As you can hear, all the letters end in ah. Same with Hindi. So we get Mahatma Gandhi, Buddha, Himalaya, Kamasutra (literally “Pleasure Manual,”) Raja, Karma, Yoga and Ganga, the native name for the Ganges River. All melodious…even euphonious.

In India you have a vast wealth of sounds and rhythms over the millennia. On the rupee note today, you will find fourteen different languages. Once in Calcutta I purchased an ayervedic medicine with the Sanskrit name Mrita Sanja Bhani—to be taken at the point of death. I took two aspirin instead…

From Sanskrit to Hindi, ancient and modern, from the earliest Vedas to a Bollywood song and dance, expect conflicting perspectives. Sadhus meditating on Brahma, the Creator; gurus pondering Vishnu, the Preserver and his son Krishna, hero of the Bhagavad Gita and, of course, Shiva, the Destroyer, the swallower of Time and Ages. All these gods can come into focus when a devotee recites the universal mantra Om Mani Padme Hum. Om, a sacred symbol, Mani Padme, jewel of the lotus flower and Hum means something like the condition of Enlightenment symbolized by the lotus and the jewel of wisdom therein.

By contrast, take a typical Bollywood song like Maito Deewana, Deewana. “I am a mad passionate lover.” Perhaps the Kamasutra comes to mind, perhaps not…

Or take this popular song where charity has its rewards:

Tum ek paisa dogi, O das lakh a dega. “If you give a beggar a single paisa, you’ll receive ten-thousand from heaven.”

But a voice from the past, no less than the word of Krishna, comes with this admonition:

On action alone be thy interest,

Never on its fruits.

Let not the fruits of action be thy motive,

Nor be thy attachment to inaction