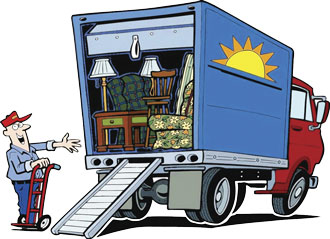 The pay from my after high-school job delivering furniture for Corben Co. helped me on my way to college. I got to drive the flatbed, Ford delivery truck. At five-three I barely reached the pedals. After two-weeks experience I deemed myself driver and quiet Charles Smith, my six-feet-four-inch classmate as helper. With one of us on each end of a couch we were a bi-racial “Mutt and Jeff”. Stacked perfectly, the truck’s flat bed would hold four rooms of low-end furniture. We could make several afternoon deliveries on one trip. Fast.

In 1951 Monrovia was a segregated town. The Southeast quarter housed people of color. Syl Fisher was the only black person on the Monrovia Police force. He lived there and the southeast quarter was his beat. Our first delivery on Tuesday was in the Southeast quarter on East Walnut Street. The house was a small, grey frame home like mine, typical for Monrovia. I pulled up to the curb, sent Charles to announce our arrival and untied the load. We wedged the front door open.

A young mother and two children inside stared in disbelief. We placed the new divan with its back to the front window. The woman looked worried and the children appeared to be frightened. I asked the woman to sign the delivery receipt. She was reluctant but scribbled a mark on the paper.

Charles and I left the house and re-tied the remaining load. I placed the marked receipt in the back of my clipboard and we sped on to the next of five stops. We got back to the store as night came on, brought the blankets, ropes and dolly into the back room and turned in my clipboard to the office. “Hey, Bernie. You finish all your deliveries?” Irv Corben asked. “Sure did. Here are the receipts.”

After checking all the signed receipts Irv said, “You’ve got the one for Mrs. Washington here but she just called and said she hasn’t received her divan. Take Charles, find the house you delivered the divan to, check the number against the sales slip. If it’s different pick up the divan and take it to Mrs. Washington.”

It was dark as I drove the truck along Walnut with Charles. He said, “It’s hard to read the numbers but there’s the house that has the divan. Let me get out and check the address against the delivery sheet.” Charles looked grim when he returned, “That’s not Mrs. Washington’s house.”

Together, we went up and rapped on the door. When it opened we saw an agitated looking black man. He stood squarely, like a guard in the doorway. The woman who marked the receipt and the two young girls were behind him. All three appeared frightened and at a loss.

“Hi, I mistakenly delivered that divan here today instead of to Mrs. Washington, your neighbor here on Walnut,” I said, looking stupid and pitiable. The man grimaced and shouted, “What?”

In response, I meekly repeated my original statement while shrinking my posture and nearly dropping to my knees. He glared at me, the invader of his home, his right cheek twitching, his eyes burning at me, the disrespectful, stupid, offay who was putting him to the test before his family. “Please, Mister, forgive me. I made a terrible mistake by delivering Mrs. Washington’s divan to your home and upsetting your family. Please forgive me and let Charles and me remove this wrong furniture from your house.” I was oblivious to the power this man must yield to me before his family because of my blue eyes and white face.

With his squinting eyes searing my shaking countenance he took half a step back out of the doorway and gave me the strongest dismissive sign. He snapped his fingers at me. I got the message. Charles and I picked up the couch and guided it out of the small living room. “Thanks, Mister, you saved my job,” I told him as we were leaving. As if he would care! He just dropped his head and glared at the spot the divan had occupied.

As we took the divan to the right house I said, “Charles, I thought that guy was going to kill me.”

“Bernie, he was more afraid of you than you were of him.” “Why?” “Because you’re white.”

We stood back with Mrs. Washington to admire her new divan, the centerpiece of the modest living room. With sparkling eyes and broad smile she said, “You boys were so late getting here I thought you had given my divan to somebody else.” “No way, ma’am, this divan was meant only for you,” I said, as I asked her to sign the delivery slip. Going over the day’s events I concluded that college was a good idea because I wasn’t smart enough to make a living delivering furniture.