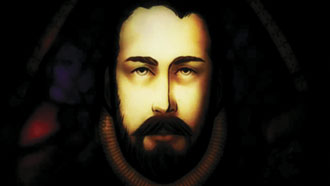 In 1580, before the Puritans colonized New England, the Spanish King Philip II appointed Luis de Carvajal governor of all the lands from Tampico to what today includes parts of Texas and New Mexico. Carvajal was a rich, powerful man with royal support; but also with strong, envious enemies. Before Carvajal was granted his territories he had to recruit one hundred soldiers and sixty married craftsmen willing to bring their families.

At his own expense he bought, supplied and commanded several merchant ships. Although Carvajal was a recent convert to Catholicism the king waived the requirement that Carvajal and his followers be “old” Christian.

However as a “converso,” he was suspect and shortly after beginning his colonization of territories he had to fight a three-year legal battle with the courts in Mexico City. His victory was short lived because a new viceroy was appointed and in 1595 Carvajal was arrested and accused of being a Jew.

Part of the evidence against him was his use of clean clothing and of changing his bedding on Friday evenings. His dietary restrictions and fasting were brought into evidence that he was not the Catholic he professed to be, but the Jew that he was.

While in jail he began to secretly record not only his life, but to write about his Jewish practices and his faith. He recorded his thoughts in 180 pages, in three small three inch by four inch books. He used a quill pen and wrote in such a tiny script that one can barely read the words, many of which are in gold leaf that he scrapped from the pages of the bibles which were supplied to him. His thoughts, prayers and emotions are recorded in both Latin and Spanish.

In order to be able to deny the books were his, he used the pseudo name of Joseph Lumbroso, or Joseph the Enlightened. No one knows where or how he hid these miniature books from his enemies, but most suspect he kept them hidden under his hat. After his death the three small documents were found in a jacket pocket. He recorded how he was tortured until he gave up the names of 120 practicing Jews, which included his mother, five sisters and their children.

His sisters and mother were tortured separately in a cell that adjoined Carvajal´s, so that he could suffer the guilt of remorse and the pains of his betrayal. Two of his sisters died by suffocation when a metal collar was tightened around their necks during torture, the other three sisters and his mother were burned at the stake along with an effigy of his deceased father. In his diary Carvajal laments his own weakness, particularly when he listens to the inquisitors as they stretched his mother on the rack, her agonizing screams ripped at his heart. The guilt of his confession and betrayal were so great that he tried unsuccessfully to commit suicide.

Within a year of being imprisoned Carvajal met the same fate as his family and several of the friends he had betrayed. He was burned at the stake. The Auto de Fe was just the beginning of the Inquisition in Mexico, the institution and practice that lasted until 1820.

For many years the delicate documents were kept in Mexico´s National Archives, but in 1932 the diaries disappeared. They were quite small and easy to smuggle. In 2016 the 16th century documents were put up for sale by a London auction house. In 2017 these now verified documents were once more put up for auction and the transcripts were purchased and donated to Mexico.

Today, the story of early Mexican Jews is safely stored in a special climate-controlled vault in the National Library of Anthropology and History in Mexico City. These rare miniature books that chronicle the lives of early Mexican Jews can once more be appreciated by scholars and the public as well as the 50,000 practicing Mexican Jews.