THE CAMPFIRE AND THE CLOISTER WALK: A Mystical Episode at Lourdes 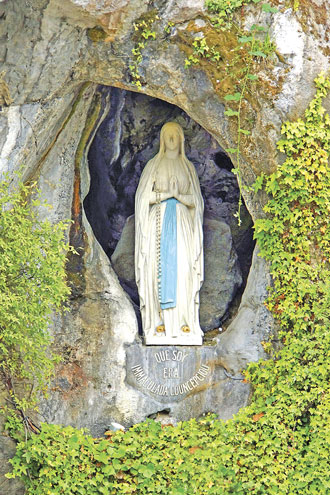 The sharp peaks of the Pyrenees stabbed into the crystalline blue heavens on that March day, their snow-capped tips reflecting the bright sun of early spring. The little town of Lourdes basked in the warmth of that alpine sun, the rosy tile roofs of the houses standing out against the bucolic countryside of southern France. I strolled in silent solitude along the clear waters of the Gave de Pau, the river that flows through Lourdes on its route to the sea.

An imposing castle stood watch over the valley, the Chateau fort de Lourdes, its foundation dating back to Roman times. Throughout its history, it had traded hands many times, having been restored and renovated in the Eleventh and Twelfth Centuries, belonging at one point to the Spanish kingdom of Navarre, then to the English in 1360, and handed back to France in the early Fifteenth Century. It has at various times served as a prison for criminals, political opponents, and POW’s. It is now a museum.

And then I came to the Grotto of Massabielle, a cleft in the rocks, not unlike any other cleft in the gray rocks of that special place. A tiny spring bubbled from beneath the rocky overhang. On a narrow ledge stood a statue of the Virgin Mary, marking the spot where on 18 successive occasions the Mother of Our Lord appeared to an impoverished 14-year old French peasant girl named Bernadette Soubirous.

Every pilgrimage is a pilgrimage of one, as are our individual journeys through life. Those who accompany us on our journeys—priests, poets, monks, friends, brothers-- fulfill a role, sometimes a vital one, but the journey itself is still ours and ours alone. We make choices, some better than others, take wrong turns, often follow false trails, wander off into the woods of error, plead for rescue or surcease.

I don’t remember what I expected to find on my pilgrimage to the grotto on that sunny mountain morning. It was anticipated that each pilgrim would leave an offering, light one of the candles from the selection available and leave it to consume itself at the foot of the ledge where an icon of Mary stands in silent vigil. I always experience a sense of confusion at such moments, uncertain as to what a proper amount should be. Found myself totally at sea many years earlier when I stood in the cramped confines of the Holy Sepulcher in Jerusalem, fearing that my candle would set the Orthodox priest’s beard aflame and befuddled by the three Israeli currencies available at the time.

Nevertheless, I selected a huge candle, left what I hoped was an appropriate offering, and proceeded to light the wick. I had anticipated no holy vision on that day, expected no new revelation, and yet I received two. They were unsolicited and unexpected, and they lasted for only a fraction of a second, but they were real enough and stamped indelibly on my memory. Concurrently, there appeared to me a campfire inside the fire ring at a place deep inside Mohican-Memorial State Forest in Ohio, a place my backpacking friends and I have called Brown Bat Spring because of the pristine water that gushes from beneath the roots of a huge hemlock that marks the spot and because of the friendly little creature that has flitted amongst us there on so many occasions.

At the very same moment, there appeared to me the cloister walk into the sanctuary of the Cistercian monastery of Our Lady of the Genesee, in Piffard, New York, a place of comfort where I have spent many a spiritually enriching retreat over a span of years.

I do not know the meaning of the visions or why they appeared to me at that time and place. Perhaps the campfire represents friendship or fellowship. Perhaps the cloister walk symbolizes quiet, contemplation and prayer, entering into a serious dialogue with the Creator of it all. Perhaps I can only accept it for what it was, that we mere mortals, composed of dust and the incandescence of stars, are intended to understand only so much and no more. I know that the visions have brought me comfort over the years since.