An Actor’s Life In Little Theater 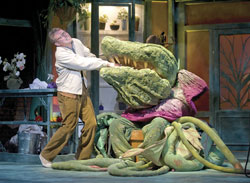 To help you appreciate the art of the little theater, I want to share with you exactly what goes on behind the stage walls and into the corridors of the creative action itself.

First, everything you see on the stage is fake, including the food, the drink, the plants and, in some cases, one or two of the actors. For example, in my first show, some of my hair came courtesy of shoe polish. Further, I was astounded at how thick my make-up had to be, so thick that I believe I looked, from the audience, to be digitally blurred. Caught on the street in such garishness, I could have been left for dead by skinheads.

Anyway, here are a few things you might find interesting if you’re considering some new avocation to replace Sudoku.

Blocking. “Blocking” is the theater’s term for assisting people in getting around the stage so that they aren’t bumping into one another or the furniture while they speak their lines. For example, the actor has to learn where he’s supposed to be on stage when he greets another actor. The line “Welcome, darling! Delighted to see you!” naturally has to be said at a place where the speaker can see and welcome his or her lover. If an actor is standing behind a potted nasturtium when he says this to the lover, the audience may forget the lover and start rooting for the nasturtium.

Projecting. Everything you say on stage, you have to shout until you’re hoarse. Even a dying man’s sentiment, such as “I feel at peace now, my child.” needs to be screamed into another actor’s face, so that the guy who’s sleeping in the back of the theater not only hears you, but wakes with a start.

Costuming. The biggest costume problem is: they aren’t washed or cleaned from performance to performance, so over the ten days of shows under torrid stage lights and nervous sweat, costumes can actually become microbial ecosystems and begin to decompose in mid performance. After the run of the show, I felt burying some costumes was really the humane thing to do.

Backstage Etiquette. While the play unfolds onstage, backstage everyone is sitting nervously hush-hush waiting for their next entrance. No one can speak, get in anyone’s way, do anything that might break another actor’s concentration. You go through a period vaguely similar to high school detention, but without the excitement. Then, suddenly, out of this zombie state, a waiting actor has to bound out from the wings chirping, “There’s No Business Like Show Business” and the audience has no clue the actor had just been slapped to full alert and shoved on stage by the ever-vigilant stage manager.

Quick changes. Not surprisingly, for some actors, there’s the opposite of waiting around. These are the quick changes. Sometimes, a whole stage day will go by with a curtain closing and opening in 75 seconds of real time, and you will have to change from last evening’s tuxedo into your early morning tennis outfit within 60 seconds. This usually requires help from others. The challenge in such a rush is making sure the change is complete. So that you aren’t skipping out on stage “next morning” in whites and a tennis racket and still in your black socks and Italian loafers.

Superstitions. Finally, most of you know that theater people are notoriously superstitious. The one familiar to most is that no actor must ever hail another actor with the expression, “Good luck,” however innocently the words may be uttered. Such a miscue it is believed will jinx the entire show. “Break a leg” is the proper expression. It derives from the manner in which actors centuries ago would bow in acceptance of applause. They would lean their torsos on crooked and crossed legs (much like a curtsey today) while the audience applauded. Legend has it that one popular actor had received such a long and engaging ovation, requiring such a long and protracted bow, that he did indeed break his leg. And so the expression: “break a leg.”

I made the mistake of blurting out “Good luck” just before a show. Everyone within hearing range flew into a panic. You’d think I’d said, “I may have an airborne infectious disease that causes blindness.” People who are normally emotionally-stable were whirling around in a frenzy, spinning three times and throwing salt over their shoulders, much of which landed in the eyes of other actors doing the same thing. Others were cowering in the corners of the green room squeezing their temples between their palms and sobbing. Still others rushed out for a cigarette and a chance to caress their Hamsa amulet. I was apologizing up and down for the mishap, but remained unheard and unforgiven for the remainder of the evening.

But the question that kept popping into my mind all the while was, “Is this really how Shakespeare started?” 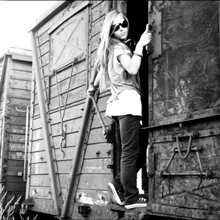