—Advice to the Lovelorn, the Overfed and
The Deeply Disgruntled 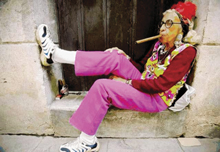 (Ed. Note: The Portia column has become one of our publication´s most controversial. Some people despise it, others are vastly amused. A few folks—including “Portia” herself—think she is sadly misunderstood. Hence, hoping to discover this acerbic lady’s more compassionate side, we elicited her opinions on a wide variety of topical issues.)

On the Status Race here at Lakeside

“Stop trying to keep up with the Jones’s. It’s easier to simply drag them down to your level.”

On the Local Art Scene

“You don’t need to know anything about painting to call yourself a painter. Once Jackson Pollack was admitted into the pantheon of great painters, the door opened to anyone who could afford to buy a gallon bucket of paint.”

On the Widely-Mixed Nature of the Ex-Pat Community

“As far as I’m concerned, it matters little if a person is a stone alcoholic, a dope fiend, an ex-felon, or even a communist. But if a person doesn’t drive a car, I have to conclude that there is something seriously wrong with him.”

On the Growing Trend Toward Psychoanalysis in Mexico

“Risky at best. I was in therapy for eight months with a shrink in Guadalajara, when he finally woke up long enough to confess that he spoke very little English. My advice: Find a bed-mate who speaks your language.”

On the Struggle to Get Published

“Many should give up the struggle and try, for a change, to get a good night’s sleep. Others, however, should never give up. My own self-help book was accepted only after I had gone (starting with A) through almost all of the publishers listed in the Writer’s Market. The book was finally published by Zebra Press, which was rather far down in the alphabet.”

On the Caliber of the Local Acting Talent

“Several local performers are exceptionally talented. But others are effective only at portraying blithering neurotics, in much the same way a midget might be good at playing a person who is very short.”

On Her Stock Reply to Incomprehensible Queries

“I always send along the same letter: ‘The polysyllabic grandeur of your interrogation precludes comprehension. Eschew superfluous verbosity and elucidate in a more explicate manner.’ Fortunately, I rarely hear from these idiots again.”

(Uh, we’re now rather sorry we asked. But at least our readers might finally understand why “Portia” prefers to remain anonymous. Public stoning in the village square could come back into style.)