—Advice to the Lovelorn, the Overfed and 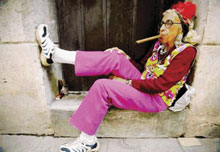 After years of widowhood, I have finally found a nice man here at Lakeside who has asked me to marry him. Like me, he has been living alone, and wants a sympathetic companion for whatever time is left to him. I am tempted to accept his proposal, though he is not nearly the man my late husband was. This gentleman here at Lakeside drinks too much, and has few interests other than hoisting beer with his loud-mouthed buddies and complaining about the political scene up in the States.

Worst of all, however, he wants me to give up the little boutique I own in Chapala, claiming it diverts my attention and has yet to become a money-making enterprise. He’s right on both counts. Yet I love that small shop, which is about the only creative thing I have ever done in my entire life.  Still I hate to walk away from a potential marriage that will probably prove no worse than most of the ones I see down here. Any advice?

Your touching dilemma brings to mind a little poem I once heard.

Most women get married, ‘tis true.

They think it’s the best they can do.

But why spend your life

Frankly, though I have what I hope is a happy marriage, I think the institution is vastly over-rated. In your case, I suspect it might prove downright discouraging. You list several items on the debit side, counter-balanced by only your notion of security. But if that security comes at the cost of your self-esteem and peace of mind, what have you really gained?

I suggest you and Mr. Would-Be Wonderful move in together for the next few months, and if at the end of that period, he is drinking and complaining less, you might move on to stage two. But do not sell off your shop. Locating another mate will be far easier than finding something else you love to do.