Venice in a Wheelchair 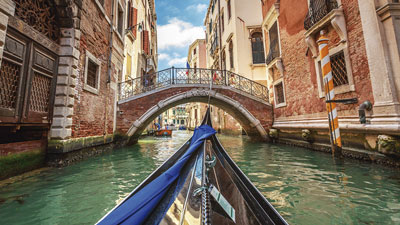 VENICE! The very name usually conjures up romantic images of beautiful old buildings, gondolas on narrow canals and fine dining under starry skies, but not for me.

About three weeks before I was to join a friend Jean, my sister Judy and her husband Robert on a cruise through the Mediterranean in October 2007, I fell on a staircase in Scotland and broke my ankle in four places. After a very complicated operation and two weeks in hospital, the doctors reluctantly agreed that I could go on the cruise but, in retrospect, I should have listened to their advice and gone home instead. The trip became a nightmare from the moment our flight took off from Edinburgh, complete with lots of luggage, a wheelchair and crutches. We had hoped to have three glorious, relaxing days in Venice before boarding our ship, enjoying all that this beautiful city has to offer but, for me at least, this did not work out as planned.

Arriving in Gatwick, we discovered that the ground staff was on strike and that we had to transport all our own baggage for what seemed like miles to the international terminal. I was pretty useless in my wheelchair, even with a mountain of luggage on my knees, and the transfer was quite a challenge in the limited time of our schedule. We finally arrived at the gate just in time to hear an announcement that our plane would be departing two hours late, and this delay increased as we waited. We finally took off so late that all the special arrangements that we had made for our arrival in Venice had been cancelled.  Almost anywhere else in the world, we would have hailed a taxi and gone to our hotel, but not in Venice.

To start with, it was very dark, pouring with rain, and the Special Services had gone home for the night. We had no alternative but to manage with public transport. This started with a short bus ride to a pier where we transferred luggage, wheelchair and all, onto a small and very crowded boat covered only with a soggy tarpaulin. After a rough and very uncomfortable crossing, we arrived at another dock and were told to take an appropriate canal boat, which left a little further down the pier. What they did not tell us was that we had to cross a bridge over a canal, that the path was a mixture of cobbles and potholes full of water, and was very badly lit. This took us about thirty minutes of manoeuvring our heavy luggage and my wheelchair through the obstacle course and over the dark bridge, which I had to do on crutches.

By the time we finally reached Hotel La Flora we were so wet, cold and dirty that it is surprising they even checked us in. The dining room was already closed, the bath water was cold, and, for me the final humiliation, my wheelchair would not fit into the elevator. We fell into bed filthy and exhausted, just the way we were.

Next morning, we slept in late and woke to a dark, wet day totally unlike the Venice we had dreamed of. I decided to stay by the fire in the lounge with a book, but the others braved the elements and finally returned shopped out and soaked. However, they had found some beautiful locally made glass and exquisite Pashmina stoles to take home as gifts, so their day had not been wasted. They had also booked tickets for a Vivaldi concert in an old church and insisted that I join them, in spite of my sense of foreboding.  There are only two ways to get around Venice, by foot or by small boat, and as neither of these are wheelchair friendly, my protests were well founded.

There were no boats that would take us where we wanted to go, so we set off on foot, with Robert pushing my wheelchair, bumping over the wet cobbles and negotiating bridges every few minutes. Each time, Robert had to collapse the wheelchair and he and Jean carried it across the bridge while I struggled over on crutches, which was both time consuming and dangerous. About half way, we stopped for dinner at a delightful restaurant where the food was wonderful and we were relieved to be warm and out of the rain. Sadly, the bad weather obscured the beautiful setting on a canal, but it was cosy and full of ambience, so we all enjoyed it thoroughly. After dinner, fortified by good wine and with full stomachs, we set off again trudging through the dark, wet night and I wished I was still curled up by the warm fire with my book. Eventually, we reached the church and took our seats for the concert. The building was vast, unheated, and smelt of wet clothes but the concert was excellent and, even under these difficult circumstances, we enjoyed it.

We had crossed five bridges on our way there, so decided to go back to our hotel by another route which looked easier on the map. The first three bridges were not too difficult and we were finally feeling that we must be getting close to home, when we came to a wide canal spanned by a bridge with twenty-five steps up, an expanse across the top, and twenty-five steps down again. By this time it was close to midnight, we were cold, wet and exhausted and felt completely defeated. The wet weather was really aggravating Judy’s arthritis and giving her a lot of pain, and Robert and Jean were obviously not looking forward to hauling my chair over this mountain of a bridge.  We stood there dripping and staring at this newest challenge.

Suddenly, four tall, young men appeared over the top of the bridge, dressed in smart uniforms of black, red and gold, and descended like angels from Heaven. Apparently they came from a very exclusive local naval academy and had learned the art of chivalry. They appraised our situation at once, donned white gloves, picked up my wheelchair and carried me over the bridge. The people standing around cheered and clapped and I was ready to swoon with relief. The young men clicked their heels, bowed graciously, touched their caps and went on their way. I still cannot believe that none of us had a camera to record this amazing event. In fact, we are still dining out on the story.

I was now safely over the last bridge, but the others still had to join me.  For my sister, this was a slow and painful process and I don’t think she has ever quite forgiven me for my easy passage. However, this bonus was a big boost to our morale, and we found the rest of our trip much easier. Sadly, the rain continued until we sailed on our cruise, the boardwalks were erected in the Piazza San Marco and other flooded areas, and I stayed firmly by my fire in the lounge for the rest of my stay in Venice. 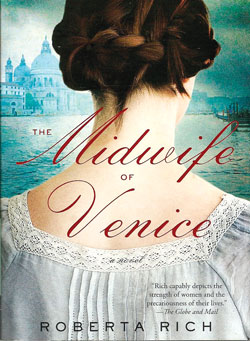