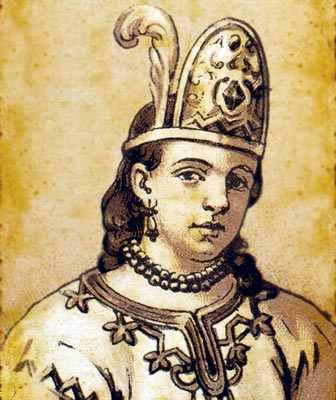 Malinche (also known as Marina, Malintzin, Malinal…) remains one of the most enigmatic and controversial characters in Mexican history.

According to Texan historian T. R. Fehrenbach, “If there is one villainess in Mexican history, she is [Malinche]. She was to become the ethnic traitress supreme.”

Born to a royal family, Malinche was sold into slavery as a young girl, perhaps by her own mother. She was eventually given as tribute to Hernán Cortés who, once he recognized her noble bearing and especially her mastery of multiple Native languages, made her his interpreter, mistress, and even adviser.

Malinche enabled Cortés to convince many subjugated tribes to join him in overthrowing their Aztec overlords. According to one apocryphal account, Cortés quipped afterward that, after God, Malinche was the main reason for his success. The fact that he named their child after his own father, Martín, was a huge, public testament of his love and respect for her.

Together, Cortés and Malinche founded a new Mestizo (mixed Spanish and Native) race.

Did Malinche thus betray her own race? She enabled Cortés to end Aztec tyranny and human sacrifice. Even Native accounts (recorded on codex drawings) depicted her in heroic fashion, sometimes even carrying a shield into battle. She could never have anticipated the horrific results of Cortéz’ ruthless conquest of Mexico—aided in no small part by Smallpox, which finally claimed Malinche, too, at the young age of about 25.

Perhaps journalist Farah Mohammed summarized Malinche best: “What all the stories of Malinche’s life—both damning and sympathetic—ultimately reveal is a particularly intelligent and resourceful woman, betrayed, enslaved, buffeted between two empires, somehow emerging as a historical giant in her own right.”

This is a selection from Ellison’s book-in-progress, Niños Héroes: The Fascinating Stories Behind Mexican Street Names. He retired a year ago after 36 years in education. He and his partner, Edgar, volunteer at Lucky Dog and SOS Chapala Dog Rescue. 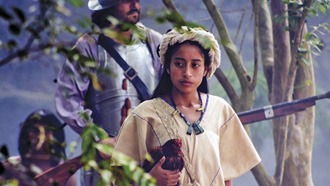