The Hero Of Molino Del Rey 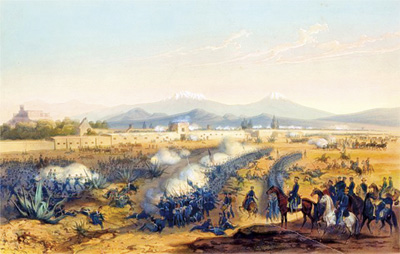 By September 8, 1847 the invading American Army had fought their way from Veracruz to the outskirts of Mexico City. Two miles from the gates of the Mexican capitol rose Chapultepec Castle and separating the castle from the countryside a dense forest at whose southern edge stood the old King’s Mill; which had been turned into a cannon ball foundry. Lopez de Santa Ana, who was both political head of Mexico and its army, asked convents and churches to ship bells to the mill to be melted and turned into cannons. The Americans were ordered to take the mill, break up the factory and destroy all munitions.

Although the American victory was almost certain because they were better equipped and outnumbered the Mexican by nearly four to one, the Mexicans were fighting for their homeland. The outnumbered soldiers felt resolute in the defense of their country and its capitol. The battle started about five thirty in the morning and no one doubted that the costs in lives would be great. The invaders were better armed, but the Mexicans fought with ferocity and exacted a raising toll amongst the foreigners.

Despite the fierce hand to hand combat of the encounter and the hopelessness of being greatly outnumbered the Mexicans fought with the love of their homeland. As in every battle there are always anonymous heroes who fall during combat and there are sometimes a few valiant soldiers who remain in the minds of their countrymen as heroes for the cause. Margarito Zuazo, from the Mina battalion was a young man who gave his strength and his life defending his homeland from a superior invading foreign force.

After hours of fighting his comrades lay dead and wounded around him. The flag of his country had been torn from the pole on which it flew when he valiantly ripped it from the stanchion and wrapped the symbol of Mexico around his body. Although wounded and badly bleeding, with the strength that remained the young soldier climbed over the broken stones of the nearly destroyed mill and the dead bodies of his countrymen.

When he reached the top of what remained of a broken wall, which was about to be overrun by his country’s enemies he stood in defiance of an invading army. They stormed the last defense and found Zuazo’s body wrapped in the symbol of Mexico. The Americans pierced his body with their bayonets and turned Zuazo and the Molino del Rey into a sacred pavilion and a symbol of glory for all Mexicans.