Bidding Farewell To My Singer 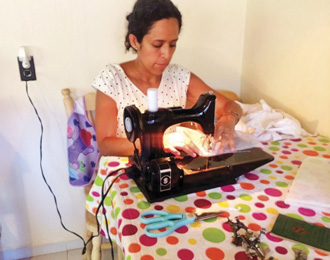 Mahadevi Prem at work on her 78-year-old Singer

I’ve arrived at the inevitable point in life where I’m wanting to give cherished possessions away. Better to do it now than have others haul everything off to a consignment shop after I’m gone. This way I can have the consolation and pleasure of knowing my valuables, if only sentimental, are in the hands of people who will appreciate them or at least pretend to. There’s comfort in that, too.

One of those items is a Singer Portable Electric Sewing Machine that had belonged to my mother. According to the instruction booklet this particular patented innovation had been manufactured by Singer since 1915, though I think my mother acquired hers around 1941, the last copyright date in the user manual. A sewing machine that you could plug into the wall and run off electricity by depressing a foot pedal was something revolutionary at the time, not to mention that you could pack it up and store it in a handy carrying case that “even a woman” could lift, and it could be stashed in a closet out of sight.

My mother was an expert seamstress and people always envied her style. On this little machine, she sewed all her clothes using Vogue patterns that she perfectly fitted to a form shaped to her own dimensions. You couldn’t buy clothes like hers in any department store. When my sister and I came along, she sewed our clothes, too. There were ingenious attachments that allowed her to create fancy plaiting, shirring, ruffles, stitches, and buttonholes. It was amazing what this machine could do, though I never had the patience myself to figure out the directions for the attachments that replaced traditional labor-intensive handiwork. I remember some of the clothes she made me around the age of four—pinafores and play suits cut from my father’s recycled khaki military uniforms.

I confess that as a preteen I yearned for store-bought clothes and envied my classmates who could pick out what they wore so they could dress like each other. I have no recollection of my mother ever taking me shopping in a department store. We went there only for her to buy fabric for her next project. During the ‘40s we traveled around the cotton states, visiting textile factories and buying by the bolt. During WWII she had my father send home fabrics from Africa from which she made everyone in the family matching shirts depicting a hurricane.

Mother died when I was ten, but Home Ec was a required subject for all girls in my high school and we each had to sew an apron and a skirt. I guess they assumed everyone had a sewing machine at home. I struggled with my sewing assignments and would have failed had it not been for Alma, a friend of my mother’s, who rescued me the night before the skirt was due. Alma installed the impossibly difficult zipper and waistband. The sewing machine then went back in the closet for almost another decade.

After I finished college and got married, my father gave me the Singer as a kind of rite of passage and it was soon pressed into service. Nonetheless, I remember taking the Singer to a store that sold fancier Japanese models and asking if I could trade mine in for a dial-a-stitch machine like my sister’s, but they said I was nuts and wouldn’t take advantage of my ignorance. They insisted my Featherweight was the Rolls Royce of sewing machines. It was metal, not plastic, and the world would never see anything like it again. So I begrudgingly took it home and started sewing clothes for my three sons and also for my husband. I sewed nothing but a couple of dresses for myself, still favoring the thrill of the department store.

In 1998, my husband and I rented a car in Paris and drove south through the Limoges on our way to the Dordogne. En route we passed through the ruined village of Oradour sur Glane, which had been preserved as a monument to German atrocities committed against the French during WWII. All the inhabitants had been shot or burned alive and the entire town set ablaze. Tourists could walk silently among the streets and witness the burned-out shells of houses and the horrors of war. I was struck how nothing survived but the Featherweight Singer sewing machine in several of the houses, plus an occasional pram, bicycle, or car. I contemplated the irony of what I had thought to be a German invention and design miracle outlasting the victims of war. I carried this notion with me and wrote a poem about it.

On June 10, 1944, the entire French village of Oradour sur Glane was shot or burned alive, all buildings torched by the 1st Battalion of Der Fuhrer Regiment, setting new standards for brutality in warfare. The reason for this atrocity was never established.

One paved street loops through the quiet town

of Oradour sur Glane, the street through which

a diorama freezing the scene in media res. Now

and grass has gained a foothold in the stone.

What things survived that day remain in place:

bicycles hung by a wheel on a nail by the door.

witness to that slender gap where needle

When I moved to Mexico, the Featherweight came too. Now on the verge of passing it on to a beloved young mother, I read a bit of surprising history about my sewing machine. I discovered that Singer was an American company from the beginning, established in 1851. Later in response to world-wide demand they set up factories in Tsarist Russia, Germany, France, Poland and Italy. During WWII the American factories stopped making sewing machines and instead supplied armaments for the Allies. Without Google to enlighten me, I might still be burdened with my prejudice.

A note of thanks from the beneficiary:

Un sueño hecho realidad, I always wanted to be able to use a máquina de coser. Today I made fabric bags for vegetables, maybe not perfect but pretty good. It was so special for me to receive such a precious gift, I honor the legacy of your mom and you as mom putting together pieces of fabric in a beautiful way for your little ones, I’d love to be able to make some dresses for Tara too. I love you, thank you. Maha 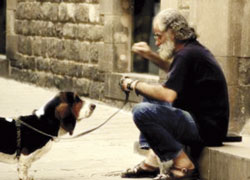