The Ajijic Plaza At Dusk

Something has changed. The air is suddenly still. Children’s screams of joy are dialed down.  I look up from the pages of my book. The shadows fade with the light as the sun descends below the western mountains, perhaps below the distant sea.  Yet there remains some natural light in the heavens.  It would be easy to miss the transition from daylight, through dusk, into night; it takes but a moment of inattention for the entire plaza to make the transition into night. Mexico can be that way.

The slightest lake breeze caresses the moment. Then comes the evening’s big blow. It charges through the plaza seeming to turn on the lights as it scatters the red, blue, green, and white bits of confetti and splashes of white flour here and there on the plaza tile floor.  Children of all ages break open huevos con confetti on each other’s heads in sneak attacks, and screaming in laughter, run for cover.

All the while, in anticipation of day’s end, soccer balls fly among groups of three or four boys; other boys whizz through the Plaza traffic on sport bikes, and skate boards. Lovers hold hands making their plaza rounds.  Dogs, with no apparent home other than the plaza, wander freely.  They sniff the tiled plaza floor in search of a dropped morsel or a bone abandoned by another dog that lost interest, attracted by another dog’s behind. Dogs leave their mark on Mexican style chairs in front of coffee or alcohol venders.

Gringos and Mexicans alike sip coffee drinks, beers, and tequila by the shot, or Margarita, con or sin sal. Battery operated miniature cars whip around venders of colorful trinkets and toys spread on a tarp, or table.  A vendor with bright eyes and a gracious smile carries an amazing selection of woven straw items in his arms, and a selection of straw hats stacked on his head. Octogenarians, cane in one hand and an ice cream cone in the other, shuffle between ice cream parlor and park bench; once safely out of traffic, they smile with relief and might converse with each other on this and that, reminisce, perhaps sit silently with their dog, as old as their master in dog years.

The strong wind blows by, ending unnoticed, not even by the clouds of hovering bobos, innocent but bothersome fly-like insects that gather in clouds at the same well-lit places every night.

Mournful tones of a lone saxophone leak out from the cultural center, soon joined by a cacophony of band instruments, all seemingly soloists in a band being lead by Sun Ra, now reincarnated in this Mexican village.  They play the well known “Concerto for Sun Ra‘Arkestra’” and “Chaotic Community Life.”

Now, a family strolls by, a young boy, perhaps a five-year-old, walks between his parents, left hand in his mother’s right, right hand in his father’s left, while father, with his right hand absentmindedly steers his twelve-year-old daughter using her pony tail as a sailor uses a tiller. A group of young girls giggle by as a nearby group of stone-faced boys feign disinterest.

An inexperienced plaza watcher would expect a mass collision: dogs, pocket Chihuahuas to full-size German shepherds, soccer balls and players, skate boards and boarders, sit-in plastic autos scooting this way and that, uncontrollable remote control toy cars whizz around, (indifferent to their contradiction in terms), insouciant couples, octogenarians (still carrying their cane and ice cream cone), inebriated tequila drinkers, and wide eyed caffeine addicts, one and all tangled together in a heap.  It’d take a crack team of bomberos to disentangle them without injury.

However, plaza goers don’t subscribe to some Hobbesian social contract.  Instead,  all players safely slip by one another without incident, perhaps like the flock of black birds that take off from the trees in the churchyard, up through the sky, appearing almost as a single organism, only to return to the same trees as individuals, perhaps the same tree, perhaps the same branch.

Plaza life is not necessarily for you if you’re faint of heart, or if you’re uncomfortable without formal rules for others to follow, but it can be exciting! 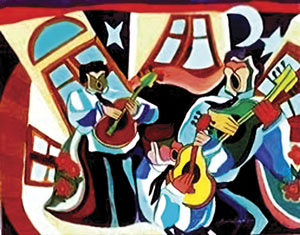 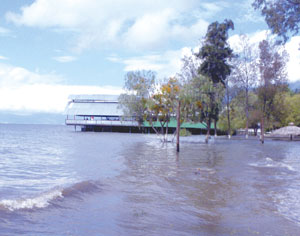