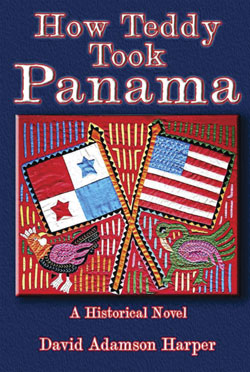 An exciting and fast paced novel of historical fiction by David Adamson Harper is a good read for anyone interested in the history of Panama and the Canal. This novel is especially appropriate because this year marks the 100th anniversary of the opening of the canal through the Isthmus of Panama, one of the great engineering marvels of the twentieth century.

President Teddy Roosevelt devises a plan after the French failure to complete the canal through the Colombian territory of Panama. Teddy is frustrated when the Colombian senate fails to ratify the Hay-Herrán treaty in which the United States offers to pay Colombia for a permanent lease on the six-mile-wide strip across the isthmus. But Teddy also knows that Panama desires independence from Colombia. He reasons that if Panama were an independent nation, a new treaty for the building of the Canal might be possible.

Teddy summons Jack Quinn, a New York lawyer, to the White house. Teddy offers Quinn, a former aide from his Rough Rider days in Cuba, the opportunity to become a secret service agent and go to Panama on a secret mission. Quinn is to hold meetings with the Panamanian rebels and tell them if they revolt, the U.S. Navy will assist their cause for independence. This secret support of the rebels sets in motion Teddy’s plan to have a new treaty and continue the canal work abandoned by the French.

In addition to being a well-written novel, How Teddy Took Panama tells the story of the founding of the Republic of Panama, artfully interwoven with the fictional Quinn, who works with Philippe Bunau-Varilla to draft a new Canal treaty advantageous to the United States. Although under orders to keep Teddy’s involvement secret, Quinn falls in love with the beautiful Genoveva Arias de Ochoa. Unfortunately, she is the wife of the brutal Colonel Ochoa, the second in command of the Colombian army garrison in Panama, a man vehemently opposed to the rebellion. Quinn knows that Ochoa has to be silenced for the rebels to be successful, for Genoveva to be free, and for the Panamanian Canal treaty to become reality. In a desperate bid to win Genoveva’s hand and also eliminate the Colombian threat to the rebels, Quinn challenges Ochoa to a duel.

David Harper brings to life the exciting details of the meetings and the machinations both in the White House and among the founding fathers of the new Republic of Panama. Teddy is able to accomplish one of the great coups of the century without historians and journalists able to prove his involvement. The book also contains all the fascinating real-life details of the story of Philippe Bunau-Varilla, the Frenchman who becomes Foreign Minister of Panama and earns millions from the negotiated treaty between the new country of Panama and the United States.

The intrigue and politics of Roosevelt’s success needs little embellishment, but Harper carefully weaves the subplot of the clandestine agent’s adventures involving bloodshed, passion and love. The book is well written, well researched, instructive and highly entertaining, a great period read that quickly pulls you in. Quinn cares for his newly adopted country. Like all honest heroes, he has his ghosts and skeletons. You feel for him as a person and a part of history despite knowing the outcome ahead of time.

http://www.amazon.com or www.howteddytookpanama.com. It is also available in paperback at Barnes and Noble website and locally at Diane Pearl’s.