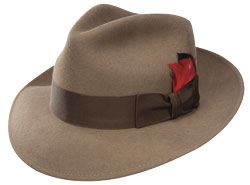 Albert Braithwaite folded his pin-striped shirt and placed it carefully into his old, brown suitcase. Mabel, his wife of almost fifty years, gazed at him steadily from her place on the bedside table and he could almost feel her nod of approval as he closed the lid.

Albert and Mabel had planned this trip many months ago, spending the long evenings of the Pennsylvanian winter sitting at their dining room table looking at the maps spread out in front of them. Their neighbours, Fred and Sally Collins, had a daughter, Betty, who ran a Travel Agency, and when she had heard of their plans, she had sent them all kinds of glossy brochures for everything from imposing hotels, to glittering cruise ships to elegant trains, but in the end they had settled for a guided bus tour. It was what suited them best, they said. They were simple folk and the glamour of those cruise ships would make them feel uncomfortable.

And even the thought of taking a train made them a little uneasy: they had never been on a train before and couldn’t imagine sleeping in a little roomette as it clattered along the tracks. No, they would take the bus. They were familiar with buses. They liked them, and the drive up to Montreal would take them through places they had never seen before and let them sleep in a nice room in a regular hotel.

Mabel had insisted Albert buy himself a new shirt. His clothes were starting to look their age, she said, and when he replied that he too was looking his age so they were a perfect match she had simply laughed. She had had a wonderful laugh. Sometimes while he was sleeping, he could still hear it.

They had driven up to Pittsburgh and bought the shirt at Macy’s. He had argued about both the cost and the color, saying that a plain white shirt from Marshalls was good enough for him and was what he had worn all his life, but Mabel had convinced him that the blue suited him.

“It brings out the color of your eyes,” she said, smiling the smile he had loved before she added, “This is our first ever holiday, and it will probably be our last. We’re not getting any younger, Albert. Your back has been acting up real bad these last few months, and my knees are getting worse. We’re going to make this trip something special—a holiday to remember.”

In the end he had agreed to buy the shirt, but when she wanted him to buy a new pair of trousers too he had put his foot down.

“Enough is enough,” he said. “I don’t need a new pair of trousers. The ones I have are just fine.”

He regretted that decision a little now. He wanted to look nice for her on this trip, and since Mabel had gone, his best pair of trousers had seen a lot of use. He had worn them to the funeral of course, and to the memorial afterwards, but they had also been called into service when friends had come to visit, and for visits to the bank, and to the insurance agent, and even to the phone company and the supermarket, all places he had never needed to visit before and all places he felt he should dress up for. The trousers were now a little shabby, but after he had taken them to the dry-cleaners he figured they didn’t look too bad.

Albert closed the suitcase, picked it up and moved it over to the door where Mabel’s hat box still sat, right where she had put it in readiness for the trip. The hat box contained the hat she had purchased that same day in Macy’s, and Albert’s biggest regret — after losing Mabel of course — was that he had not complimented her on her purchase. Instead, he had mocked her, and the memory shamed him.

“What in God’s name is that?” he had asked when she emerged from the store. “Have you lost your mind? We’re farmers, not city slickers. You think the chickens are going to want to see you in a hat like that?”

“Never you mind, Albert Braithwaite,” she had replied, her tone more firm than he was used to hearing. “I’ve waited a lifetime for this holiday, and I’m going to enjoy it. I’ve been doing some research, and Montreal is very different from Pittsburgh. It’s French-Canadian, and they wear the latest fashions there. I’ve seen lots of photos in those magazines they have in the library, and every one of those women wears a hat. I’ve already got two nice dresses that will serve me well, but I need a hat.”

The squeak of the gate opening caught his attention. That would be Fred come to take him to the bus. Albert blinked back the memories and opened the door. As he lifted his suitcase outside onto the stoop, his habit of 70-odd years kicked in and he reached out and lifted his brown felt fedora from its peg on the wall. But the hat box sitting there on the floor caught his eye and he stopped himself. Smiling, he bent down and lifted the confection of bright pink feathers from their nesting place and placed it on his head. This time his old fedora was going to stay home. He and Mabel were going to do this trip together.