By Robert Kleffel and Jim Tipton 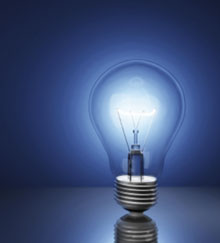 Every Wednesday morning we eat breakfast together on the Ajijic Plaza and discuss our common interests in literature and all things beautiful. Often as we ponder deeply the merits of this or that, we find ourselves distracted by a beautiful señorita who, totally indifferent to our intelligent and eager faces, nevertheless lights up our mornings as she jogs past like a springbok antelope on the African veldt.

This particular morning, feeling recharged by just such a sight—but also feeling at our extended middle age we needed to show more resistance—we forced ourselves to switch to a more serious conversation lest we conduct ourselves with less decorum than our, at least self-perceived, dignity generally allows.

In late spring, Jim, for $19.95, had downloaded a book, How to Reduce Your Electric Bill. The basic idea is that all of those appliances that are always “on” or “ready” or “plugged in” are quietly consuming electricity whether or not you are using them, and that includes televisions, cell phone chargers, garage door openers, microwaves, computers, etc. The author showed his own before and after bills, reducing his summer electric bills to less than $15 a month.

Robert was certain Jim must have a drawer filled with Ginzu knives, you know, the ones you can use to saw bolts in half just before you cut a paper-thin slice of Serrano Ham. Robert was so certain Jim had been taken that he bet him lunch if he could prove he saved more than 10% on his electric bill.

Jim had already set things in motion, simply unplugging every device he was not using (also using power strips with master off switches). A couple of months passed, and Robert had forgotten about Jim’s scheme to save money. One morning, while waiting for oatmeal and our first jogger, Jim dropped on the table his old bills, often averaging a revolting $2,000 pesos or more for a two month period, and his latest, in which he had put into action the methods in the book. What a difference! Jim’s bill for May and June was only $229 pesos, or $115 pesos per month, around $10 US! He had cut his usage by more than half, but equally important he had, as a consequence, dropped himself into the lowest price/kw hour. (In Mexico, the more electricity you use, the more you pay per kw hour.)

“Ohm my God,” Robert thought. His interest was sparked. Robert proceeded to test the idea: “I took an inventory of my own home and found that I had 85 light bulbs and 24 electrical devices permanently plugged into the electrical system. According to the book, the devices continue to draw some power even when they are not in use. I made this simple test: I turned off all of the lights and devices, and then I checked the electric meter and found that the wheel was still turning but much slower. The simple solution was to shut down the circuit breakers at night with the exception of our bedroom and the refrigerator. We also shut down the circuit breakers when we left the house for a long period of time. Our savings on our next bill turned out to be 700 pesos or about 30% less than the usual bill.”

“Well, still keeping savings in mind, I suggested we go to lunch at 1:00 to take advantage of the early-bird special, but Jim insisted on the traditional 2:00 o’clock comida. I took the wine list from Carla not trusting Jim’s unreliable palate and the off chance that he might select a French Gran Cru.” Robert ordered the house wine, Las Moras Malbec, an excellent value at 160 pesos. Jim asked what would be the perfect pairing with the wine. “Steak,” Robert said. Jim was pleased with his medium rare 16 oz. Rib Eye.