PRAGUE-Pay to Pee and Stand to Eat 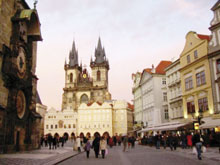 We hopped on the subway at Zelivsk?ho, hauling a map, a sense of adventure and mild anxiety.We had to count the number of stops, as pronouncing Czech Republic street names remained an unappealing task. My tongue twisted from a tangle of v’s, k’s, z’s and h’s common in the Slovak languages. As the train car passed Ji?ího z Pod?brad, Nám Míru and Hlávni Nadra?ni stations, we shuffled off with the locals at Mustek, dizzy.

The hotel concierge warned us that, with over 4 million yearly visitors, Prague suffered from customary tourist rip-offs, which he called, ‘Czech tricks.’ “Watch out for gypsies who linger in underground stations and the crowded ‘Old Town’ center, waiting to lighten your Czech Krowns from pocket or purse. Never get into a taxi before first settling on the fare and never say ‘thank you’ to a waiter when handing over money for a bill. That’s considered a done deal and no change will be returned.”

We donned vests with zippered pockets, hid our Krowns (Kc’s for short) in pick proof places, grabbed the list of ‘must sees’ and set off to explore Prague, a political, cultural and economic center of Europe for over 1100 years. Gothic and Renaissance architecture, sites reflecting the permanent seat of two Holy Roman Emperors, the Hapsburg  Monarchy and the Austro-Hungarian Empire, waited to dazzle. The Charles Bridge, built in 1357 by Charles IV, and Prague Castle, dating from 885 topped the list.

A pedestrian zone emerged as we climbed from two stories below street level.  Narrow flags attached to an 18th century Neo-classical building grabbed our attention. The only recognizable word, ‘Casino.’ waved in the breeze. We avoided slinking into these post-Communist era money pits in Poland and Hungary, but this one lured us inside. We reshuffled the list and put ‘history’ on hold; first things, first, money to be made. We headed through the ground floor McDonald’s, then climbed up threadbare carpeted stairs to the gaming rooms, which oozed with old European finery.

The roulette table beckoned amid crystal chandeliers, musty velvet black-out curtains and a quiet elegance; no glitzy gambling here. We plunked down some Czech Krowns on favorite numbers and within 20 minutes both my husband and I had doubled our money.

Winnings tucked away, our whetted appetites needed food before taking on centuries of history. The square was lined with charming outdoor cafés, but a perusal of menus and prices suggested that we would have to make more trips to the casino just to eat. A simple hamburger cost a staggering 390 Kc; which at a rate of 17 to $1US equaled $23, fries extra.

Momentarily flush with casino Krowns, we selected an eatery that displayed small, wooden stands with extended pegs holding salty pretzels on each table. How quaint, we thought.  In Mexico, chips and salsa grace restaurant tables. Here in Prague, pretzels make a perfect starter with an icy tap of Czech beer. After we ordered, the waitress slapped down two tiny strips of paper with ‘toalet’ printed on each. I didn’t pay any attention; big mistake.

My husband, Ernie, innocently crunched on the pretzels while I devoured a ham and cheese panini. When I asked for the bill, I was prepared for the ‘thank you trick’. The waitress, who spoke some English, arrived with a calculator in hand. She punched and crunched so many numbers, I felt woozy. She started with 475 Kc’s for the sandwich and 2 beers; then she counted the pretzels on the stand. “Sir, you ate 4 pretzels. That’s 50 Kc’s per pretzel, another 200. There’s the ‘sitting fee’ of 50 Kc’s per person, and Madame, you had mustard; that’s another 25 Kc’s, making the total 800 Czech Krowns.”

I felt slammed, smacked around and tricked. “I see no sign saying there’s a pretzel charge. That’s $3USD each. A sitting fee, are you serious? We ate, we didn’t just sit,” I argued. No matter that I was paying with winnings. I hated being ‘gouged.’

“Madame, what can I do, my boss is crazy. These are the prices,” she lied with smiling satisfaction. I forked over 800Kc’s, the entire amount of my casino booty. I needed a bathroom, as the beer and financial drubbing brought on a sense of urgency. After weaving through the maize of rooms inside the restaurant and down two flights of stairs to the Damas, I encountered a stern looking Czech woman wearing a babushka. “You need toalet pass. No pass, no pay, no pee.”

I remembered that ignored slip of paper, lying on the table two stories up. “I forgot the pass, it’s upstairs. We already paid the bill,” I begged.

“No pass, no pee,” she echoed. She knew those words quite well. My bladder couldn’t tolerate another round trip, so I paid to pee. Throughout Eastern Europe, there wasn’t one free public restroom. To pay at a restaurant, however, after the bill beating, bordered on absurd.

We drifted a half block to Wenceslas Square and stumbled upon two food kiosks, positioned on opposite corners of the huge plaza. An array of sausages called klobasá hung from thin wires stretched atop the service areas. Inside the open air kitchens, these foot long beauties sizzled on rotating grills.  Lines of locals waited to order. Others gathered around a nearby metal stand-up table, eating.

“This is an Anthony Bourdain moment,” my husband shouted with boyish glee.

“Remember when he explored Prague for the Travel Channel? He ate at one of these exact stands. I can hear him saying, ‘Only eat with the locals. Get yourself to one of the sausage kiosks and go no further, because King Wenceslas loved sausage.’”

For the price of one pretzel, Ernie inhaled a smoked klobasá, served with a slab of crusty rye bread and a dollop of spicy brown mustard. A Smaz?ny Syr, fried cheese on a bun, soothed my inners after that pricey panini.  We stood for free with the Czechs, feasted on the local fare and laughed. Sausages solved the price gouging and sitting fees. In just a  few hours, we learned Prague’s basic rules of sustenance. Count the stops, play to win, pay to pee, stand to eat and stay away from pretzels.