A Refugee’s Cycle of Despair 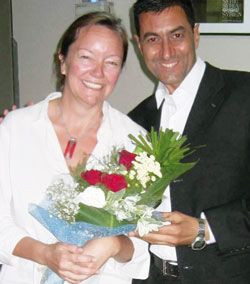 (Ed. Note: The poem below is in response to material that Kelly Hayes-Raitt read to the Ajijic Writers’ Group. By way of an explanation, Kelly writes: “In 2008, I spent the summer volunteering with Iraqi refugees in Damascus, Syria, through an excellent program coordinated by the Middle East Fellowship.  I reconnected with Abdullah, who I had met in Baghdad just before the war, and shadowed him as he tried to get food rations for his family, medical care for his father and school supplies for his daughters through UN refugee-support programs. My article about our experiences (a chapter in my forthcoming book, Living Large in Limbo:  How I Found Myself Among the World’s Forgotten) was awarded first place by the Gulf Stream Magazine, the literary journal published by Florida International University.  The full article, titled “Still Alive,” is found at http://w3.fiu.edu/gulfstream/stillalive.asp. I’m grateful to Ken for this poetic tribute!”)  ~ Kelly Hayes-Raitt, www.PeacePATHFoundation.org)

He lived and worked in Baghdad in comfort; not rich, nor poor.

A handsome man with dark blue suit, crisp shirt, and tie of blue,

Served her breakfast of olives ‘n eggs, with a smile so fresh and new.

Olive-skinned and slender, he lived peacefully in Iraq.

Treated her as a special friend, and said she should come back,

Presented her marigolds, from the garden across the street,

And said that if she’d stay a while, his family she should meet.

When the US Marines invaded Baghdad, he asked them why they came.

They said “to bring freedom and democracy,” was their government’s aim.

He thought, “it might be possible they bring a better life for me,”

‘Til violence shattered his home, leaving but one choice; to flee.

Five years later in Damascus, he was a destitute refugee.

Six, packed in a small apartment, he certainly wasn’t free.

He thought of the soldier’s promise of freedom - a sacred vow,

Being driven from his home and country, where was that promise now?

At a UN refugee center, with four months delay for food,

Standing in blistering sun for detergent, flour and olive oil.

Yet unwelcome here in Syria, regardless how they toil.

Where lies the promise, of that marine who invaded his homeland.

He no longer thinks to return to Iraq as previously he had planned.

Now Syrians are rebelling for freedom and democracy,

And Five hundred lay dead in Assad’s regime of autocracy.

Now the land to which he’d fled in haste, from freedom here to cower,

Is now prepared to fight a war, with support by a western power.

And he, his wife, two daughters, sister and ailing father -- God forbid,

Must now find a new land, were possibly, they can live as once they did.