From Perito Moreno Glacier to the Chilean Border- Part 2 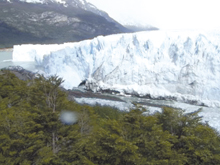 A slow, muffled wheeze of labored breaths echoed in the crisp air. Creaky noises rippled through the mass, as if old bones were snapping under pressure. A calamitous thunder exploded, rocking onlookers with its intensity, as jagged pieces of the white body broke off and plunged into the milky-blue, ice bath below.

The crowd of international parkas huddled together on the viewing platform, only feet from the icy beast. Stunned by its stoic beauty, its age and expanse, witnesses from around the world stood in reverent silence and watched the Perito Moreno Glacier perform daily tasks.

Measuring 97 square miles of above water surface and 19 miles in length, the Perito Moreno Glacier, located in Los Glaciares National Park, Argentine-Patagonia, remains one of only three, non-receding Patagonian glaciers. Stable, without retreat for the past 90 years, it ranks as the world’s third largest reserve of fresh water. Named after Francisco Moreno, a naturalist who explored the glacier first in 1874 and father of Argentina’s National Park system, the glacier completes the Southern Andean Patagonian Ice Field. 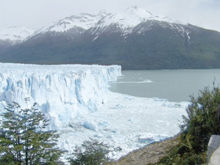 The glacier moves at a speed of two meters per day. This forward movement gives it life, creates the sounds of breath and breaking bones and wows the crowd as it discards pieces of its exterior, ruptured during the march in a process called calving. The enormity of this moving wall of ice commands incredible respect.

With the narrowing light of the Southern Hemisphere, the blue color emanating from the ice mass bordered on ethereal. A naturalist explained that the blue hue resonates when compacted ice crystals allow light to penetrate the ice undisturbed, thus being absorbed rather than reflected. Ice absorbs much of the red end of the spectrum; this lack of red wavelengths produces the color blue in the human eye.

Three levels of viewing areas provided close observation of the glacier. Trails through the Sub Andean, Beech tree forest reached the shore’s edge where the glacier pressed against land. I soaked up light rays rarely experienced by Northern Hemisphere inhabitants, gazed at this living mass, listened to its sounds of life and captured ‘forever’ images in my mind.

Protected from the cold wind with layers of Polar Tec and Thinsulate, we ate bagged munchies sitting among shore boulders and watched the massive forms float by in Iceberg Channel. “Lunch with a View”, I will long remember. 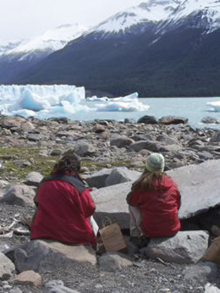 Lunch with a View- Iceberg Channel

As El Calafate disappeared on the horizon, we headed overland into the emptiness of the Patagonian steppes toward the Argentine-Chilean border. Safely in the custody of Overseas Adventure Travel experts, fifteen thrill seekers entered the phase of no return. No doctors, no clinics, not even a gas station for five hours; most importantly no turning back. Going home evaporated as an option.

Brutal wind howled, while snow and sleet blanketed the bus’s windshield. We encountered interminable flatlands, thousands of sheep and desolation. Herds of alpaca family guanacos and long legged, ostrich-like Rheas darted across the gravel roadway, which stretched on through the barren wasteland, hour after hour.

A non-descript hovel appeared in the distance—the Argentina border crossing station. The frontera merits few comforts. Depending on the humor of the immigration officials, the crossover can be a snap or a snag, a universal toss-up. On a cold, snowy, lazy Sunday, the agents didn’t fancy a lengthy disruption to their rest. They processed us out of Argentina with unusual speed.

Despite crossing the border, official Chilean territory wasn’t over the imaginary line. A five mile stretch of “No Man’s Land” lurked, a swath of ungoverned, unprotected and unmapped terra firma, where neither country claims sovereignty. The barren landscape showed no physical differences, yet those few ‘limbo’ miles took on the image of a wild, untamed frontier. A pioneer mentality swept through my mind.

The Chilean immigration checkpoint proved more diligent. All things human and inanimate were herded into a space smaller than my gardener’s bodega. Every border crosser stood in front of their belongings, while the inspector rifled through the items.

If the officials feel cranky, this process can take interminable hours. We smiled, greeted them in Spanish and they seemed amused by the gringos. The examination proved quick and satisfactory. We reloaded ourselves and our disarrayed luggage back on the bus, drove 500 feet and then had to unload everything again to transfer to a Chilean bus, a Chilean driver and a Chilean guide. It’s all part of the immigration charm. Officially in Chile, we headed into further desolation to Torre del Paine National Park.