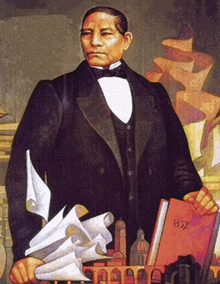 At the age of thirteen Benito left the field and walked  to Oaxaca  where he found work as a domestic servant in the household of Don Antonio Maza, who also employed his sister. Don Antonio, impressed by Benito’s quick intelligence and desire to learn, became interested in his development. His friend Antonio Salanueva, a devout Catholic and a lay member of the Franciscan Order, taught Benito to read and write Spanish, grammar, arithmetic, and bookbinding.

With the hope that he would become a priest he was sent to the Franciscan seminar in Oaxaca where he studied the writing of Saint Thomas Aquinas and other great Catholic philosophers. He graduated from the seminary in 1827 but decided not to become a priest.

Instead he entered the Institute of Science and Art and earned a law degree. It was there that he was introduced to the works of the rationalist philosophers of enlightenment and their secular doctrines. The ideas took root. Benito Juarez   became a judge in 1842 and governor of the state of Oaxaca in 1847.

In 1853, because of his opposition to Santa Anna’s return to power, Benito was forced to leave Mexico and take refuge in New Orleans where he supported himself as a cigar maker. He returned when Santa Anna was forced to resign in 1855. A liberal government under Juan Alvarez was formed and the period known as La Reforma (The Reform) began. “Ley Juarez” (Juarez’s Law) was passed the same year which removed the fueros (privileges) of the Church and the Military. In addition, it declared all citizens equal before the law. When a new constitution was passed in 1857, Benito became chief justice and vice president under the president Ignacio Comofort.

As was to happen so often in Mexican history, a reactionary counter-revolution lead by General Felix Zuluaga and supported by the Church and the military began what was called the Mexican War of Reform. Benito was arrested and would have been executed had not the Poet Guillermo Prieto intervened. He stood between Benito and the firing squad and said “Brave men do not execute!” The firing squad lowered their weapons and Benito escaped to lead the liberals in the war of the reform.

Benito called for the confiscation of all Church properties. After four years of fighting, the reactionaries were defeated and the liberals returned to power. They elected Benito president. Unfortunately the years of chaos had left the country bankrupt and deeply in debt to England, France, and Spain.

When Benito was forced to suspend payment on the debt the creditors seized the port of Vera Cruz. A settlement was negotiated with England and Spain but France wanted more—a presence on the North American continent. The French force moved out from Vera Cruz to capture the capital at Mexico City and impose a puppet government.  Mexico and Benito Juarez would face yet another four years of fighting, turmoil, and bloodshed.

The French were defeated by General Ignacio Zaragoza Sequin and Colonel Porfirio Diaz at Puebla on May 5th 1862 (Cinco de Mayo) but the French regrouped and captured Mexico City a year later. They installed Maximilian as emperor of the puppet government, an event that was welcomed by the Church, some of the military and large land owners. When Maximilian didn’t restore the fueros of the Church and the military he lost their support. Juarez continued to resist the foreign imposed government. He rejected Maximilian’s offer of amnesty and the office of Prime Minister.

Eventually when the French withdrew their troops to meet the Prussian threat in Europe, Maximilian and his conservative supporters were defeated. Benito returned to power and the Reforms were implemented. The Church’s huge haciendas were seized and sold. The proceeds were used to pay down the country’s debt. Juarez was re-elected in 1857 and 1861.

It was July 18th, 1872 and Benito was at his desk in the National Palace in Mexico City. There was much left to do and maybe he had little time to do it; lately he had a persistent pain in his chest.  Suddenly he gasped, clutched his chest, and slumped forward in his chair.

Many years later, during the Mexican Revolution, Father Miguel, Father Jose, and Benito were joined by other Mexican patriots. The band of horsemen grew. The corn was finally harvested.

On Michigan Avenue in Chicago, near the Chicago River, across the street from the Tribune Tower, is a small plot of land with a bust honoring Benito Pablo Juarez Garcia. The plot is probably no bigger than his field in San Pablo Guelatao. Similar memorials can be found in New York City on Sixth Avenue, in Washington across from the Watergate building, and in New Orleans on Basin Street. On the banks of the Rio Bravo (Rio Grande) is Ciudad Juarez, a city of over a million people which is named in his honor. He is much revered in his own country. His birthday is a national holiday. The Mexican twenty peso note carries his image.

Benito traveled a long way from his humble beginning and for a man small in stature he cast a very long shadow and will continue to do so for many more years.