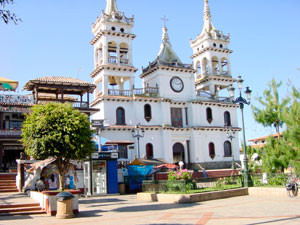 It started with a travel article on day trips you simply must do. Maybe it is truly one of those places you don’t want to miss, and maybe someone wants to promote tours. We didn’t know which, but when the weather is particularly hot here, a mountain retreat sounds inviting.

We were already in the car, having just had Sunday brunch out. So we headed west toward Jocotepec, and soon the south shore presented its luxuriant green hills and pastures, blue skies and distant white clouds with the quiet of a Sunday anywhere in Mexico. It seemed that, in a matter of minutes, we had entered another world. Perhaps we had, for the south shore uses less English. Nonetheless, we entered this distinctly Mexican world with a sense of excitement. What new experiences awaited us this day?

The kilometers rolled easily past us as we approached Tuxcueca, the turning point. This is well marked with a signpost pointed south towards Mazamitla. The road twisted and turned as we climbed in altitude, enjoying the view of Lake Chapala, along with the mountain valleys and pasturelands.

We also saw teenaged boys herding small clusters of cows. Here we were into dairy country, its fields populated with cows, horses and some bulls. At one point we saw a road sign warning us to be cautious because this was a poblado, or inhabited area. When we came around a turn, we noticed a large cluster of greenhouses. There were cows grazing in the fields alongside.

Soon we came to the first major pueblo, La Manzanilla de la Paz. What struck me most was that it is a sizable town with its own bull arena for charrerías, which are riding and roping exhibitions using horses and bulls and testing the skills of the vaqueros (cowboys). But even beyond the village itself, the town limits are stretched along this twisty highway. The extended area is entirely of farms and ranches. The name implies that this “knob” of the mountain is a peaceful place.

Soon we were getting close to Mazamitla. My husband checked the time and the distance. He had estimated the trip would be close to 100 km (60 miles) and would take about two hours each way. And so it was.

We followed the traffic and discovered a serious bottleneck through the downtown area. We identified some pleasant looking restaurants, a large central church, and many tiendas (shops) along every street, offering anything a shopper might want and spotlessly clean. When we saw teens with cell phones, we knew this was a prosperous area.

Since the cobblestone streets run parallel to each other, crossing in a grid, they tend to have steep areas as narrow as our own streets in Ajijic or Chapala. Some care is needed when driving off the main drag for cars and trucks are often parked along the sides, and steep streets made of cobblestones can be slick in the rain. Some of these have been wisely paved with two concrete tire lanes to provide smooth driving and grip.

One such street runs up the back end of town to an area we quickly discovered is the starting point for “extreme sports” activities. The lay of the land ahead appeared to offer a wooded area, the Parque Publico la Zanja. Another street at the south end of Centro heads southeast where, according to the map, we would have found the trail leading to the Mazamitla 30-meter (95 foot) waterfall, but it was starting to rain, and we had brought no hiking clothes or rain protection. Here is what awaited us.

Instead of seeking the waterfall, we scouted the Villas Mazamitla Hotel. We had seen a brochure on this new hotel and wanted to see for ourselves. It is a lovely spot just outside town, set in a large stand of pines. There we found individual cabins made of knotty pine décor with fireplaces, jacuzzis, terraces and a private fishing lake. The wonderful aroma of pine makes breathing a pleasurable experience. The well-appointed cabins are large enough for a family of four, or two couples. Some will suit a group of six. For two, the cost is 1,250 pesos per night, but to add another two people, the cost rises little, to just 1,350. Bring an extra blanket or two per person. Dining is via the Quinta del Bosque for a truly exquisite meal of grilled steaks under the shade of pine trees, or in town at La Troje, popular with the locals.

There is also a very rustic place called the Hotel Cabaña Colina de los Ruiseñores. What a kick this place is, like something from a movie set! The rooftops rise above other rooftops, like mushrooms on an old tree. Pine needles grace the pathways, and there is a children’s play area, complete with a small play house and swings. This hotel is quite basic in its provisions but clean, and we saw several families with small children playing happily at ping pong and other ball games. The cost is a mere 200 pesos per couple per night.

Earlier I mentioned restaurants we had passed as we drove through town. There is El Pueblito (the small town), recommended by one couple, or El Tiburón Blanco (the white shark), offering seafood as their specialty, La Troje, mentioned above, and there are others too.

There is much to recommend Mazamitla, whether you go in for horseback riding, extreme sports, fishing, shopping, sampling the foods and liqueurs of the various areas of Mexico or simply going for a walk before settling in front of a cozy fire.

Set at roughly 7,000 feet above sea level, the town of Mazamitla is sometimes referred to as “the Switzerland of Mexico.” The name of the town comes from the Nahuatl word for “the place where arrows are made for hunting deer.” Mountain lions, deer and golden eagles can still be found among the pine and oak-covered hills. Come and see for yourself.