Tranquility in the Pines, Terror in the Birch 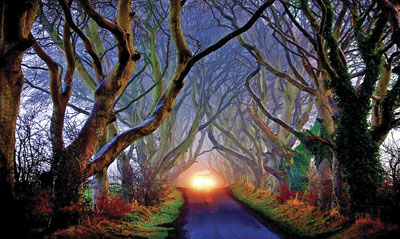 The horrific scene, hidden within the grove of River Birch, burned through my twelve-year-old eyes. I couldn’t break the gaze. Transfixed by curiosity, haunted by the image and frozen by fear, I didn’t know what to do. I had to tell someone, but running into a neighbor would never happen because there were none for miles and it would take me a half hour to reach our house on foot. I had been roaming around our 20-acre Christmas tree farm, and made the gruesome discovery at the farthest edge of the property.

I searched for a landscape marker so that I could return to this exact spot when help arrived. The first stone arch of the Peacock Railroad Bridge that crossed high above the Schuylkill River, lay in a  straight line about 50 feet ahead\; a perfect reference point, I thought. I forced my legs to move through the obsolete Schuylkill Union Canal that had been carved out along the river a century ago. My heart throbbed at a pace faster than my sprint, my breath gasped in spurts, and a blistery dry throat made me gag, but the panic pushed me along.

Trying to calm the palpitations and make the terror fade, I focused on the images of the childish antics of my two sisters and me hours earlier. Our mid-summer chore had been to pick ripe tomatoes from the endless rows planted in the dense clay loam of the canal bed and to polish them free of rain splash and dirt. Bushel baskets of the gleaming red fruit waited to be sold to local restaurants. My father told us, “I want to be able to see the reflection of your pretty faces in their shine. I want them to sparkle.” We had to work the land throughout the year. Christmas tree sales replenished the coffers for only two months.

A huge weeping willow had crashed down upon the plants, uprooted in a flash during last night’s violent thunderstorm. The fallen tree with its wispy, delicate branches reaching out from an aged, rugged trunk gave way to a magical playground. We gathered the squashed rounds under the branches, climbed among the weeping limbs and started throwing these soft red balls at one another, splattering our clothes with seeds and red juice. Mom would not be happy. The image of an innocent fruit fight between sisters seemed to soothe the fright.

I felt my cheeks burn with every stride and the utter isolation of where we lived shouted at me. Our family had moved to this remote, historic property in 1950. Early on, while exploring every square meter of the acreage, my father taught my older sister and I how to read the terrain to get back to the house.  As I ran, breathless, these important lessons became clear. In the distance I could see our farmhouse, with knotted boards, painted a robin’s egg blue.

My racing mind darted to the sanctuary of the White Pine forest where I had been just 20 minutes ago. The scent of sweet pungent sap that oozed from breaks in the trees’ straight shafts still lingered on my hands. I recalled playing with the three-inch long dropped needles that carpeted the forest floor, their touch still as silky-soft as lanolin dipped wool and making funny stick figures with the elongated, supple pine cones, smooth scales curling at their tips. I sat where the white-tailed deer had nestled during the night, where a flattened and pressed area revealed the imprint of their mattress. Light winds whispered through the tree tops making the only sound that penetrated the silence.  I tried to recapture that tranquility, but the shattered innocence of my finding reclaimed my thoughts.

Reliving the moment, I retraced every detail. I had emerged from the forest onto the canal’s dry channel and looked across the divide into the stand of River Birch, each tree revealing a salmon color beneath its cinnamon curling bark that peeled off in thin sheets like paper. I loved traipsing through these graceful trees, with drooping limbs and double-toothed, triangular-shaped leaves. There was always a crunch beneath my feet. As I scaled the bank into this deciduous forest, an unnatural shadow of a figure moved in the distance. I slowly approached the silhouette and then took not another step, too petrified to move.

From one of the River Birch, its upright branch bending from the weight, a man hung. A braided rope pinched his neck tightly, his feet dangled about a foot off the ground, his body swayed eerily in the breeze. I called to him, but only dead silence responded. His flannel plaid shirt drooped loosely from his rigid torso and tattered, Dickey work pants, like my father wore around the farm, rattled around his legs. A gray, felt brimmed hat lay on the ground among twigs and shreds of paper bark. At only 12, I had witnessed the fatal result of a successful suicide.

Now the house loomed closer. I picked up my speed, propelled by these resurfaced images. As I sprinted across the yard, I saw my mom, leaning against the door frame for support, speaking to a police officer. A man dressed in a white uniform, like a hospital worker or an ambulance driver lingered off to the side. I raced to tell them my story, but they already knew. The engineer of a freight train that had recently chugged across the Peacock Railroad Bridge had spotted a person hanging in the grove of trees and had reported his sighting to the authorities.

I told them what I saw. I thought my part in this was over. I wanted to flee back to my peaceful place among the pines, but one more task lie ahead. The policeman asked me if I could help them, if I could show them the location, if I could endure seeing it again. The officer, my mom and I got into the patrol car. The ambulance followed as we maneuvered the rutted, bumpy canal bed, inching toward the terror in the Birch.