—An Interview with Kristina Trejo 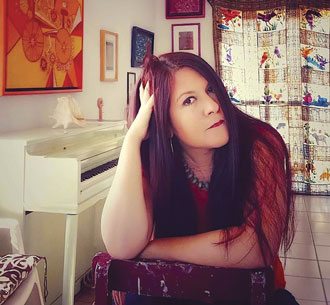 In her 39 years, Kristina Trejo has worked in jobs from a receptionist at a sauna shop, to pretzel maker, but her soul work is as a pianist and batik artist. Her father, Ernesto Trejo, was a renowned Mexican poet and translator who earned his degree at California State University, Fresno, where he met her Anglo mother and began his long collaboration with Poet Laureate Philip Levine. After earning their degrees, her parents moved to Mexico City to facilitate his translation work. Here Kristina was born, moving back to the States with her parents at the age of two.

Kristina lost both of her parents at an early age—her father when she was ten and her mother when she was 17. She had already skipped two years of high school by that time, received her GED, and entered Fresno City College at the age of 16. With her mother’s death, she dropped out of college, taught piano for six months, and then travelled––ending up in San Francisco for one year, Fresno for one year, and Oregon for three years, then back to Fresno for a few months before travelling to Mexico City where she stayed for the next few years.

I interviewed Kristina at Pasta Trenta, a local restaurant where at the time she was playing the piano on Friday nights, and after we had ordered our meals, she settled in to tell me the rest of her story. “When I got to Mexico City, I felt complete—as though I had lived there for many different lives and as though that was where I was supposed to be.” She bought a piano and it was also in Mexico City that she perfected her skills in doing batik. “My mother was a pianist and batik artist. At the age of four I started begging for piano lessons. My mother finally relented when I was five, but although she herself was teaching piano, she insisted that I would probably learn more with a different teacher. It was at the age of ten that I found my mother’s batik tools in a box and asked her to show me how she created her pieces. Insisting it was too complicated and much too dangerous for a ten-year-old to work with hot wax, she promised to teach me when I was 18. But of course by that time, my mother had passed away and I had long ago forgotten about my desire to learn the technique of batik.

“One night, when I was 18, I had a dream that I had my own batik studio. I didn’t know how to do it, but in my dream I could. After that dream I felt an urgency to do batik for the rest of my life. So the next day, when my cousin sent me a gift of 100 dollars, I took the money and went all over the city looking for a book on how to do batik. I bought dyes, fabric, wax—all the materials my mother had used to do her batik but which she had quit doing before I was born. I read the book and taught myself the process, obsessing over batik until six months later, when I went to Belize and stayed in a house in the jungle where I was amazed to discover the friend we stayed with was a batik artist. It was there that my instruction began. When I moved to Mexico City, I found other artists to study with and thus began a lifelong compulsion.” 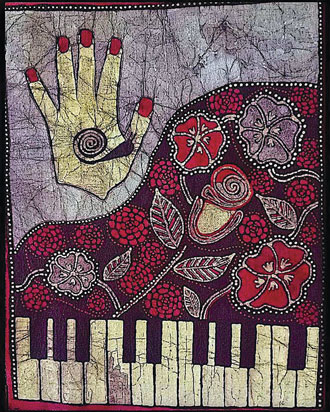 When Kristina came to a distant relative’s funeral in Ajijic ten years ago, she had no idea that she would decide to stay. “I came at a time when I needed it. Lakeside is a perfect place to still your mind and create––a perfect place to heal. Because it is positioned between two monumental natural things—the lake and the mountains—it is like you are being held safe in the middle of a peaceful embrace. The city of Fresno is situated in a valley where the air seemed trapped and full of chemicals. This situation was not conducive to music and art. There were a million people there––that many people––but fewer who appreciated art. In Ajijic, almost everyone appreciates art, music, and poetry. You don’t have to fight to be an artist. You can do it calmly in your own time and not worry about what you’re supposed to be doing. In Fresno, people thought you should be doing something serious. Here, being an artist is viewed as a serious profession.”

I asked Kristina about her goals. “My future goals? To continue following my heart about creating music and art, no matter how difficult the path. I just produced a new CD, so for the past year I was mainly obsessing over that. I don’t know how to think very far in the future because I think I was born without that part of my brain. I keep things very short term. I try to live in the present moment. There is something about the States that makes them think they can control the future. There, everyone has a five-year plan. It is very much a culture that lives under the illusion that they can control the reality we live in, but we don’t really know what is going to happen! Last night I was going to buy two bars of soap and then I thought, ‘Wait a minute. Do I even know I’ll be alive to use the second bar? If I finish this bar of soap, I’ll buy another one then.’ I stay focused on my work. That’s what keeps me going.”

At present, Kristina continues to show her batik in local galleries and restaurants. She plays piano at Casa Linda on Sundays from 11 to 1, and has collaborated with other musicians to produce her first album. “A beautiful recent spiritual experience that happened this year was to watch a huge flock of birds flying as one. The Spanish name for this is parvada, and that is the name of my CD. That flock of birds flying as one is the best answer I’ve ever gotten for why things have to be as they are. Why even question the timing of the universe? Have faith that everything is operating in a sacred design of how it needs to happen at the time.” 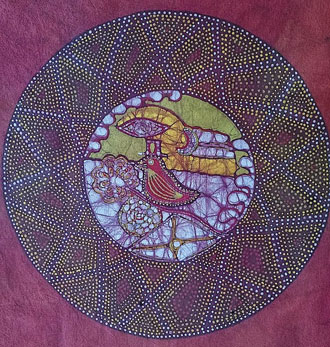 “I live between two worlds,” Kristina answered when I asked how it was to be a person of mixed heritages living in Mexico. “It is almost impossible to explain to each group exactly what the other one is about. Too often, I am seen as the ‘other nationality.’ It has always been that way. It is a lesson in how people view things. It’s hard for people to see things from two sides, but I hope to be a bridge, translating when needed, explaining cultural differences, and continuing to love both sides.”

At this point, the waitress brought our bill along with two mints in plastic wrappers, each of which contained a short quote. Kristina’s read, “A fish that fights the current dies electrocuted.” Mine read, “Money doesn’t make happiness. It buys it ready-made.” Somehow, they seemed completely appropriate in marking the difference between the two cultures that Kristina has been alternating between and living with her entire life.