The Fable Of The Complainer Who Travelled A Long Distance 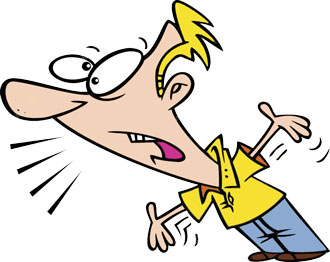 Once upon a time, there was a Loud Complainer named Mortimer who, late at night, knocked on the door of a Stand-up Guy who was monikered by the designation, Al. Al knew the Loud Complainer as a griper and grumbler who caused other people’s teeth to itch. For years, he had deliberately crossed the street whenever it appeared that the trajectory of he and him was such that their paths might intersect.

Mortimer was a charter member of SWAC, the Society of Whiners and Complainers. The subject of his complaining fit neatly into one broad category—everything.

“Hello,” said Mortimer. “I saw you were up so I thought I’d enlighten you about my life and promote within you a feeling of sympathy for my downtrodden circumstance.”

“I don’t need any feeling of sympathy,” said Al as he slammed the door into the foot of the Loud Complainer who had placed it in the path that the door usually followed when progressing toward a closed state.

Mortimer pushed his way in and sat on a red leather chair in the centre of the living room. He was tall and thin so that his large head seemed to bob and weave much like a boxer evading knockout blows. With a beard, a tall hat and a time machine he could have passed for Abe.

He spoke. “I’ve come to tell you my misfortunes so that you may feel sorry for me and recognise that the Deity has chosen me for special attention in the most negative way. I’ve tried telling others but they always cross the street and start running.

Askance peeked over Mortimer’s eyelid and peered directly at Al. “There is nowhere to go and nothing to hoe at ten minutes past midnight on a Sunday. You will not be able to tell ragweed from radishes. Besides, I promise to occupy only a few hours of your time.”

Al knew himself trapped. He also knew that if he played dead or committed suicide there was only a small chance that the Loud Complainer would leave. So he excused himself to visit the toilet in the far corner of his basement.

“No matter,” said Mortimer as he followed and shouted from outside the locked door. “I will speak in a vigorous voice even though I have a throat ailment which has recently spread from my spleen who acquired it from my liver.”

Askance moved quickly through the locked door, took up residence in Al’s eye and prompted, “Why don’t you visit a doctor?”

“I have been to every medical practitioner in this town and they’re all quacks. They don’t know a serious disease from a rash on the rectum, which I also have.”

Mortimer paused to wipe a tear, which had a somewhat crocodilian shape. Then he resumed, “I’ve also got a bone spur on my tailbone the size of a hockey puck and it pinches every nerve between my head and my ass. Last week my arm was numb when I woke-up. My wife, Vera, was preoccupied in the upstairs bathroom so I yelled that I was having a heart attack. In her hurry to call an ambulance she knocked her face cream into the toilet while it was flushing making it clog up and overflow. Vera never swears so when I heard her cussing, I forgot about my arm and ran to the bathroom. I bent over to shut off the water and my glasses fell into the toilet at the same time as I twisted my back.

I see as well as a blindfolded bat so to get my glasses, I’m up to my elbow in the overflowing toilet wearing only my bathrobe when our cat gets under it and swipes at the only thing it sees hanging. We never had the cat declawed so when the ambulance arrives the paramedics didn’t find a heart attack but they put me on a stretcher anyway because of the blood that was dripping out of my scratched scrotum. They laughed so hard at the nature of my injury that they dropped the stretcher. I hit my head producing a concussion.

The water leaked through the floor and dripped all over our new white sofa that Vera bought with her credit card to get points so we could go to Mexico for a vacation which I can’t go on now because I can’t fly due to the concussion. I would have hated it anyway because my back is sore.

Al interjected, “You should be in bed.”

“If I lay down I will surely die—so dire are my maladies and so incompetent are those who would treat me.”

“Then try the doctor in the next town.”

Again, the Loud Complainer complained loudly. “I would but my car is not capable of travel. The flywheel has detached itself from the piston and fallen onto the drive shaft where it leaks oil into the carburetor. There is not one mechanic in town capable of fixing such a trivial problem. Besides, they all charge too much and I can’t afford to pay anyway because I have lost my job and my bungling money advisor didn’t prevent me from investing all of my savings in a scheme, so diabolically clever that the constant demand for cash depleted my assets.

When my net worth reached zero, Vera began an affair with my financial advisor. Also, my children have run away and I hear they are being cared for by a doctor who I should sue for malpractice because he misdiagnosed a lung malady as boils on my goiter.”

“You and bad luck are joined at the hip,” Al said.

“I don’t believe in bad luck,” Mortimer replied. There’s a reason for everything. None of this would have happened if it weren’t for teenagers, gay marriage and Asian drivers.

Al, The Stand-Up Guy was truly sympathetic but it was late and he was tired. “Have you heard of the Vedic Dyspeptic Ulcerative Respite Clinic and Rehabilitation Center. It was founded by a famous healer on a remote Island off the Newfoundland coast on the sailing route to Madagascar. The practitioners there are experts on every ailment from rectum rash to clawed scrotums to automobile malfunction. They would probably treat an interesting case like yours without charge but a complete cure could take many months.”

Tears dripped from Mortimer’s voice and rolled under the bathroom door. “What good does that do me? I have no money. Even if the treatment is free, I can’t afford to travel all that way.”

“Perhaps, for an old friend like you, I could help out,” said Al as he emerged from the toilet, extracted his wallet from his pocket and carefully counted out the exact amount for a one-way ticket to Newfoundland.

Moral: Sometimes it costs a great deal to solve a problem.