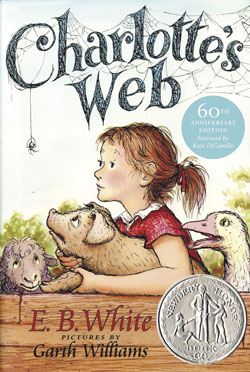 Just Imagine…somewhere in the world right now, a child or the parent of a child is turning the first page of the most popular children’s story in U.S. history, translated into at least 35 languages. They’re reading the first sentence in Swedish or Mandarin or Braille: “‘Where’s Papa going with that axe?’ said Fern to her mother as they were setting the table for breakfast.” Fern, you’ll remember, was the delightful daughter who saved from the axe the runt of the litter known far and wide as Wilbur, the piglet befriended by a spider in Charlotte’s Web by E.B. White and illustrated by Garth Williams (1952).

“Wilbur was merely suffering the doubts and fears that often go with finding a new friend. In good time he was to discover that he was mistaken about Charlotte. Underneath her rather bold and cruel exterior, she had a kind heart, and she was to prove loyal and true to the very end.”

“When Mrs. Frederick C. Little’s second son arrived, everybody noticed that he was not much bigger than a mouse.” Truth was he looked like a mouse in every way and “could have been sent by first class mail for three cents.”

The Trumpet of the Swan (1970) is less well known than “Charlotte” and “Stuart” but emanates the same charm and effortless writing. “Late in the afternoon, the swan was rewarded for her patience. She gazed down, and there, pushing her feathers aside, came a tiny head—the first baby, the first cygnet. It was soft and downy.”

E. B. had a way of soothing the reader with descriptions like this:

“The next day was foggy. Everything on the farm was dripping wet. The grass looked like a magic carpet. The asparagus patch looked like a silver forest.”

We also know that somewhere in the literary world, for nearly 60 years, some writer or student is consulting or reading for the first time Strunk and White’s The Elements of Style by Cornell English Professor William Strunk Jr. and enlarged by E.B. White, his devoted student.

“Strunk was a memorable man, friendly, funny and devoted to lucid English prose. Under the remembered sting of his kindly lash, I have been trying to omit needless words (Rule 17) since 1919. But a shadow of gloom seems to hang over the page, and you feel that he knows how hopeless his cause is.”

And if you subscribed to The New Yorker magazine in the ‘30s, ‘40s and beyond and turned to “Talk of the Town” or “Notes and Comment” or even “A Far-Flung Correspondent,” you were reading the remarkable E.B. White who joined the staff shortly after the magazine’s founding in 1925. In the early days of the magazine, he even dreamed up better captions for The New Yorker cartoons. His most famous one attaches to a drawing by his friend James Thurber where the mother says to her young daughter: “It’s broccoli, dear.” And the daughter replies, “I say it’s spinach, and I say to hell with it.” This caption of course applies today where “alternative facts” are hell-bent to replace reality.

So how does a fellow so familiar with the barnyard activities described in Charlotte’s Web wind up setting the whimsical yet sophisticated tone of The New Yorker, a tone that continues today, a tone one writer described as “invincibly debonair” á la Eustace Tilley? (The $8.99 you pay per issue today used to cost 15 cents.)

Let’s begin with what we do know. Elwyn Brooks (E.B.) White opened his eyes in Mount Vernon, New York in 1899 in his parents’ handsome home and closed them at his farm house in North Brooklin, Maine in 1985. He grew up in a prosperous home with maids, cooks, and a stable out back, a sure status symbol. Therein, he paid attention to and learned about the lives of horses, pigeons, chickens, a turkey, ducks, geese, rabbits, not to mention snakes, cats and rats. (He once taught tricks to a house mouse.)

E. B. later expressed this attraction through the farmer’s daughter, Fern: “She liked it better when she could be all alone with her friends, the animals.” He felt a kinship he never felt for people. Like Cicero, he was “never less alone than when alone.” And all the while he was writing down his responses to the world around him. Ascribing human traits to his animals came naturally, as naturally as an Aesop Fable.

We know that he hated the name Elwyn just as Vincent Millay hated Edna. “My mother just hung it on me because she’d run out of names,” he told The New York Times. “I was her sixth child.” He took the name “Andy” while earning a Bachelor of Arts degree at Cornell in 1921 after which he worked a spell for United Press, the Seattle Times and an ad agency before landing a position with The New Yorker.

He eventually developed his own style, one simultaneously simple and elegant, droll and off-hand. He began with bits of light poetry, wry, slice-of-life encounters and musings; he ended producing hundreds of essays, sketches, columns, and all manner of literary compositions for nearly six decades. He had an approach to life that readers liked. Take the bank panic that FDR faced early in his administration. E.B. didn’t weigh in with deep thoughts about presidential power or the “climate of economic fear.” Instead, he wrote: “The town was strangely quiet the first morning of the bank holiday. Every time a liner in the river blew its whistle, people jumped. We had the feeling that if anybody had broken rank and started down the street at a fast trot, the whole town would have followed him, thinking he knew where to go.” Perhaps Somerset Maugham was right when he observed that “The best style is the style you don’t notice.”

Despite Andy’s growing confidence as a writer, he was still afraid of romance. His shyness and preference for solitude did not bode well for the prospect of love and sex. But then he met Katherine Angell, the woman who brought him aboard The New Yorker. Ms. Angell was a highly respected writer and editor older and more mature than Andy. But they clicked and married and stayed that way for nearly 50 years. When the magazine began to prosper, they were able to buy a Maine farm for $11,000 with a barn full of cattle, chickens, pigs, sheep, goats and, of course, spiders. We’re told he studied the life of spiders in books and examined museum specimens for a year before starting Charlotte’s Web. He even threw a filament around wife Katherine when he went absent on business.

“Thus I, gone forth, as spiders do,

In spider’s web a truth discerning,

Attach one silken strand to you

Not exactly a hypochondriac, Andy did complain of aches, pains and maladies often but usually with a touch of humor: When the Last Great Bronchitis Comes. During one bad patch, he wanted to consult a psychiatrist “because his brain felt like a tree with a kite tangled in its branches.”

In 1978, White won a Pulitzer Prize citing “his letters, essays and the full body of his work.” He also received the Presidential Medal of Freedom and honorary memberships in literary societies across the country and finally awarded the National Medal for Literature. “All that I hope to say in books, all that I ever hope to say, is that I love the world.”

However, “Man’s curiosity, his relentlessness, his inventiveness, his ingenuity have led him into deep trouble. We can only hope that these same traits will enable him to claw his way out.”