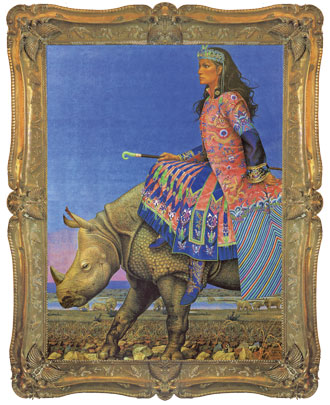 A cartoon some years ago from England depicted a field trip of sorts; a teacher and his flock of adolescent boys in their public school uniforms peering through a museum window. At least the teacher was peering. The boys’ collective gaze was fastened instead on a beautiful, elegant lady passing them on the sidewalk…sovereignty different from the Queen’s. The kind of sovereignty you might think of next time you see or read about the driver who crashes into a tree because his gaze was diverted by beauty. The kind of beauty that launches a thousand ships or Elizabeth Taylor as Cleopatra or MM and her billowing sidewalk skirts--sui generis, iconic!

Here in Mexico we have the perfect example of such sovereignty widely agreed to be “the most beautiful face in the history of Mexican cinema”. María Félix, known by her movie fans throughout the land, La Doña, the beautiful one… a fabled film star, a movie legend who embodied a completely different role-model for Mexican women during the forties and fifties and beyond. As María herself said, “With these films, I became the number one enemy of the Mexican family morals.”*

From the very beginning, she was different. Born to an affluent Yaqui Indian father and a lady of Basque birth, María was one of 16 children. She eventually moved from her home in Sonora to Guadalajara where she pursued her studies and was crowned Beauty Queen at the University of Guadalajara.  She made her first teenage mistake by marrying a Max Factor cosmetics salesman who eventually sired Enrique whom she nicknamed Quiqui. The newlyweds honeymooned in Chapala, 1938.  María described the event as “una experiencia traumatica”. (Today, she’d have a non-performance clause.) Not long after, she divorced Max and had to suffer the opprobrium of the Catholic viewpoint. She decided to escape the frosty frowns and move with her son to Mexico City where she landed a job as a receptionist/model for a cosmetic surgeon (such a face)!  But fate intervened, as they say, and the divorcé paid an unannounced visit, kidnapped Quiqui, and left María completely ignorant of his whereabouts.  Another experiencia traumatica!

Her next husband was a star in the musical firmament, famous Mexican singer/song-writer Agustín Lara, well-known for his “boleros” (romantic ballads), many of them composed for María who sang them with a distinct personality. “What can I do? I can’t be ugly.”  Lara was a major musical contributor to Mexico’s growing film industry and helped María become a screen idol.  But more than that, he pledged to help her regain custody of Quiqui, which he did.  Reunited, mother and son, by this time 12 years old, they were the picture of happiness.

Her third film vaulted María to national attention: Doña Bárbara (1943). It tells the story of a Venezuelan woman, raped in her youth, who runs her ranch like a martinet, imperious and domineering, while dressed in men’s clothes and brandishing a rider’s crop. So convincingly did she embody the role that fans began to call her simply La Doña. She reprised the role in many subsequent films such as La Mujer Sin Alma (The Woman Without A Soul), the story of a beautiful, young, middle-class woman who is determined to climb the social ladder. To that end she employs her beauty and wiles to manipulate rich men while playing with their emotions. In real life, rich and powerful men would do anything for La Doña and bestowed upon her many expensive gifts and exotic proposals such as the one by King Farouk of Egypt who offered her Nefertiti’s diadem for one night of love.“Some friends told me that pearls make people cry. The only pearls that have made me cry are false pearls…”

This largesse and multi-male attention enraged husband Lara. His jealousy was nicely captured in a cartoon depicting Lara in a movie house watching his wife locked in a screen kiss with a handsome hero.  Lightning bolts emanated from his angry expression. The Laras were headed for divorce.  As La Doña later explained, “I cannot complain about men. I have had tons of them and they have treated me fabulously well. But sometimes I had to hurt them to keep them from subjugating me.” The irony here is that Felix’s film characters started out strong and independent but were usually subjugated in the end by the prevailing machismo, and they followed their men obediently…as in Taming of the Shrew.

Her third husband, famous singer/actor Jorge Negrete, didn’t last long because he died of hepatitis 14 months after the wedding. “Men fall at my feet…Negrete surrendered to my feets.” (Her English was shaky. She refused to study it and therefore never acted in any English language movies unlike her contemporary Dolores del Río. “With Dolores I had no rivalry. On the contrary, we were friends and always treated each other with great respect, each with their own personality. We were completely different. She was refined, interesting, gentle on the deal, and I’m energetic, arrogant and bossy.”) Félix’s appearance at Jorge’s funeral dressed in trousers caused a huge scandal, which led Félix to take refuge in Europe, particularly Paris. While there she met and became the model and muse for writers, composers, actors, poets, painters and sculptors. Among them, Salvador Dalí, Jean-Paul Sartre, Jean Cocteau, Plácido Domingo, Jean Paul Belmondo, Yves Montand and many others. She learned French. Back home, she could count on Octavio Paz, Frida Kahlo, Diego Rivera (un ferviente enamorado), and even Eva Perón.

Her film career included 47 films made in Mexico, Spain, France, Italy and Argentina. Critics panned most of her pictures.  But her mere appearance as La Doña saved most of them from abject failure.    “Somehow, I seduced the public, even those who criticized the conduct of my characters in the films. My legend began to take shape without moving a finger. The public imagination did everything for me.” She was a celebrity, not just a star. One detractor wrote that “most of her films did not even aspire to mediocrity (but) a bronze goddess arose; the worst had somehow produced the best.” Proof? She won three Ariel awards for best actress and a lifetime achievement award and the Mexico City Prize. In 1996, she became the first Latin American woman to be made Commandeur de l’Ordre des Arts et des Lettres by the French government. “I don’t want to make pictures which people are not going to understand. I don’t see any point to it. I want people to be entertained.”

Her fourth and final husband was a safe and sound Swiss banker, Alex Berger, whom she outlived. Her last lover was the French-Russian painter Antoine Tzapoff. About him, María said: “I don’t know if he’s the man who has most loved me, but he’s the one who has loved me better.”  In 1990, an exhibition of his paintings included a portrait of La Doña astride a rhinoceros and one with a mandrill between her legs…

Once, when returning to Mexico after years away, she was greeted on the tarmac by hundreds of fans, many VIPs and the President, Carlos Salinas de Gortari, who welcomed her home and praised her to the open skies. Then he made the mistake of handing her the microphone.  She ripped his government for malfeasance of every kind and concluded with this: “I can have my desires and capriciousness without affecting anybody, but the desires of a President can ruin a whole country.” Amen, María, amen!

*My special thanks to Ana Leticia Vera Castañeda, local business woman and fan of Félix. Her translations, biographies and photo albums of La Doña gave me a clear view of this remarkable woman, including the cover image.

*A fine collection of Félix photos and paintings may be seen in the María Bonita Bar at the Real de Chapala Hotel here in Ajijic. Make mine champagne… 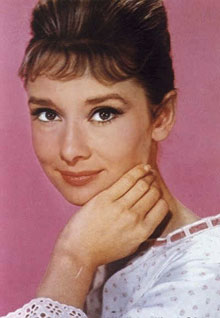 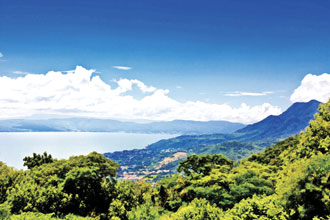 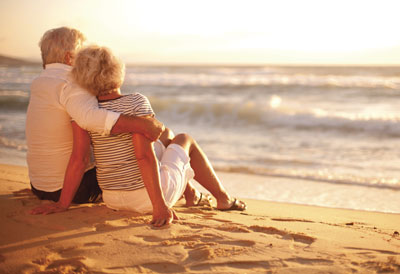